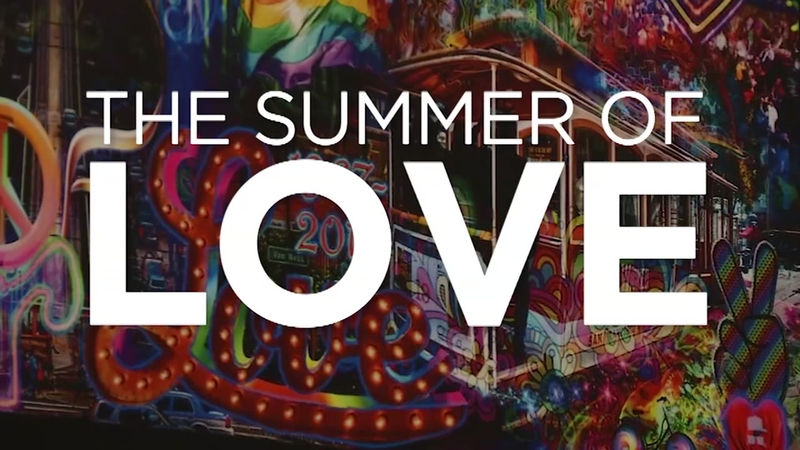 SAN FRANCISCO (KGO) -- Sex, drugs and rock and roll. That was certainly a big part of what went on 50 years ago. But the Summer of Love was also about so much more.

Some 100,000 people flocked to San Francisco during the summer of 1967, an invasion of young people looking to forget the Vietnam War, consumerism and civil strife.

Here's 7 ways they created a powerful new counterculture - and one that still influences our lives today.

The Summer of Love sparked to life a year earlier, in January of 1966, with the Trips Festival at Longshoreman's Hall in San Francisco. It brought together bands like the Grateful Dead, The Loading Zone and others, who played before crowds testing acid, a drug researched by the government.

"You (started) to see this psychedelic explosion of light and of sound and music - and of people's minds because of the heavy LSD use," she said.

Trips, along with the Monterey Pop Festival that followed in June of 1967, depended heavily on improvisation and set the stage for music festivals like Coachella and Bonaroo.

The electric guitar was invented in the 1930s, but it didn't begin to change music until the Summer of Love when artists like Jimi Hendrix and Carlos Santana extended their performances with long, improvisational guitar solos.

"Prior to 1966 and 1967, music was in short form. Songs were 3, 3.5 minutes," said Adam Hirschfelder, director of strategic initiatives for the California Historical Society.

"The music of '66 and '67 and the electrification with the guitar changes all that. The music goes on. Jams. Improvisational music and rock guitar solos begin to take over. "

The sheer number of people flocking to San Francisco, and particularly the Haight-Ashbury, overwhelmed city resources.

Finding a place to sleep was difficult. Most came with little money in their pockets. Many resorted to sleeping on apartment floors and sharing clothes. City officials did not know how to respond. Local groups banded together to treat young overcome by drugs and suffering from the effects of dropping out of society.

Two of those organizations, the Haight-Ashbury Free Clinic and the Huckleberry Youth Program, still exist today.

"The idea of turning around lives the way Huckleberry was doing in '67 was new and that created a revolution in youth programs," said Hirschfelder.

Sunshine Powers, owner of Love on Haight, keeps that spirit alive. She is part of the board of directors of Taking it to the Streets, an organization providing job training to homeless youth.

"Taking it to the Streets provides shelter, food, water and love. And in exchange, these youths keep our community clean," said Powers.

In the last two years, Taking it to the Streets has gotten 200 homeless youth off the streets. Powers says young people keep coming to San Francisco seeking refuge.

"Unfortunately today, 50 percent or more are LGBTQ because they don't feel safe where they are from," she said. "We should be honored to be a city where people feel safe."

Cultural expression flourished during the Summer of Love, and proponents of access to art, like the Diggers, helped popularize street theater and community-based art.

"Historic parks that dotted the city became sort of free public stage for that kind of cultural expression," said Hartig. "(This) was a relatively new dynamic, for people to come together to create plays that had significant social messages."

Young people wanted to take control of their surroundings, making public spaces their own, Hirschfelder explained.

"So groups like the San Francisco Mime Troupe would do performances out in the parks, on the streets," he said, noting the troupe still hold free performances today.

Many other things we take for granted today were born out of the counterculture movement of the hippie era, including downward dog.

Natural foods, and especially locally grown foods, were popularized by hippies and later adopted by mainstream America. This went against TV dinners and canned foods that were being promoted by the corporate food industry.

One of the more surprising offspring of the Summer of Love is the iPhone.

During a 2005 commencement speech at Stanford University, Apple co-Founder Steve Jobs talked about his love of The Whole Earth Catalog and how it resembled what Google does today.

The magazine, created by Stewart Brand, was founded after the Summer of Love to connect hippies who left San Francisco and went on to live in communes and rural parts of the country.

The magazine included product reviews of tools, machines, books and even clothes. But it also featured writings and essays. The blend of technology and art inspired Jobs in the way he created Apple.

"When you use your iPhone," said Hirschfelder, "you are looking at one of the most inspiration aspects of the counterculture, personal use of technology."

The California Historical Society has an exhibit titled "On the Road to the Summer of Love", on the history leading up to the hippie counterculture. It ends on September 10, 2017.

The De Young Museum has a cultural look at the Summer of Love. It is called "Summer of Love Experience: Art, Fashion, and Rock & Roll". It runs until August 20, 2017.