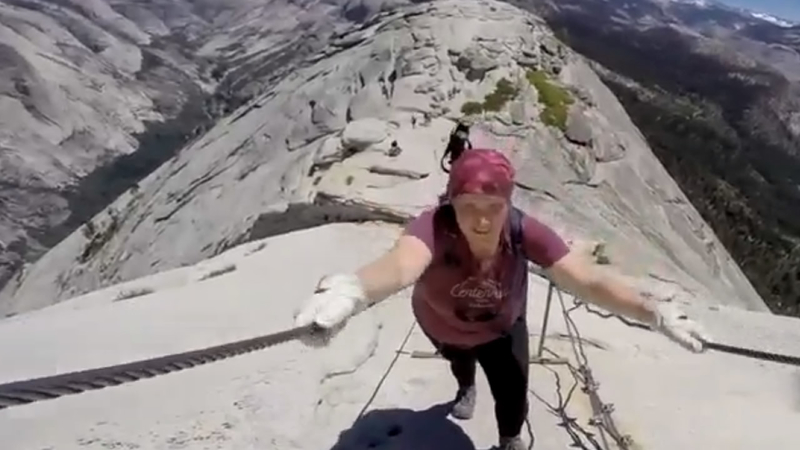 "I'd get out of bed and I'd almost fall over," she said. "And I was like something needs to change."

She wasn't even 30-year-old and had Type-2 diabetes, high blood pressure and high cholesterol.

"It's been hard for me to see her deal with weight for her entire life," Lokey's lifelong friend Troy Kellenberger said.

She felt it was the only option and it worked.

From walking to hiking, to climbing - the steps were small at first but were leaps and bounds ahead of where she started.

"I remember making it to the top of my first mountain and there was no greater feeling," Lokey.

Now, she's taking on the biggest, scariest challenge of her life - Half Dome.

"There comes a point when you say enough is enough," Lokey said. "You have to want your health and want to love yourself."

"Seeing someone set a goal, a dream," friend Derek Barham exclaimed. "So long ago after she had the surgery that really was not feasible at that time and she just kept dreaming about it."

The trek to the top was more than 16-miles roundtrip.

"It's going to get emotional," Lokey said. "I've been working for this for so long. I don't know what it looks like past this point, it's like the unknown."

A climb without an uphill battle would be no journey at all.

"I have to make it to the top of this mountain," she said. "Half Dome was one that I wanted to do. It's always been in front of me I just never thought it was possible."

"There comes a point when you say enough is enough," Lokey said. "You have to want your health and want to love yourself."

The first part of the hike she's speeding up the mountain driven by her friends - part trainers and part motivators.

But something else was pulling her to the top, her dad died when she was 25.

"He taught me a lot about working hard for what I want," she said.

And she's been training for this climb for more than a year.

"Five years ago I probably wouldn't have stepped foot in the park," Lokey exclaimed.

Back then, Lokey weighed almost 400 pounds.

"I remember thinking to myself, 'This is ridiculous. I can't even hardly walk at all,'" she said. "I'd get out of bed and I'd almost fall over and I was like something needs to change."

With gastric bypass surgery, she dropped 8 dress sizes in one year.

"I know my dad is proud of me and wants me to keep going and do this," she said.

For the unprepared, the sub-dome is one of the hardest parts of the climb. It's the final ascent before the cables where your physical strength and mental vigor is vital.

"This part right here is probably the hardest right now because my body is starting to feel what we've been going through," she said. "The biggest goal of my life is staring me in the face."

"The human body is capable of doing some amazing things and Caitlin has proven that to be true," Kellenberger said.

The final 400 feet is at times an almost vertical ascent. It's arguably the hardest.

It's on this part of the hike where people have died.

"This represents a lot of things," she said. "Getting through so much pain and heartache."

Overcoming an obstacle never meant so much.

"I wish my dad was here to see all these things happen. He pushed me every step of the way and a dome this size

And the massive feature of Yosemite National Park never seemed so small compared to the feat just accomplished.