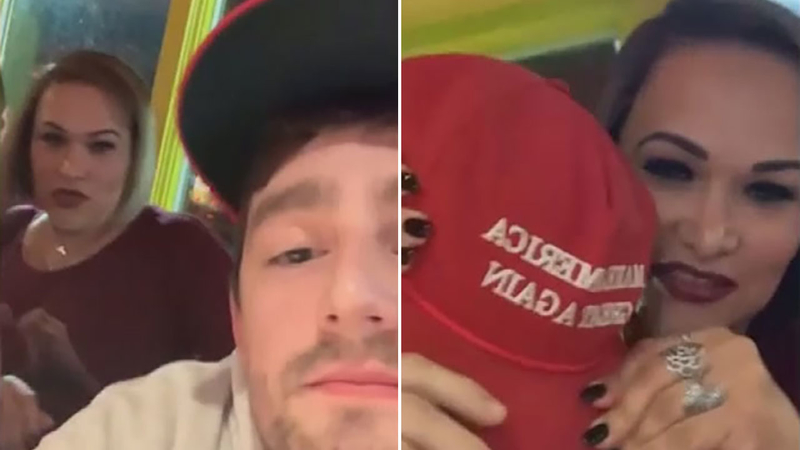 MASSACHUSETTS -- A woman faces deportation from the U.S. after she was captured on camera confronting a man wearing a "Make America Great Again" hat inside a Mexican restaurant in Massachusetts.

In a video posted by the hat's owner, Rosiane Santos is seen knocking off Bryton Turner's "MAGA" hat while he's recording on his phone. Turner also captures Santos trying to force the cap over his head.

Later in the footage, Turner captures Santos being arrested.

"That's the problem. People like that," Turner refers to Santos in the video. "They want to lash out at people who are educated."

In his post, Turner said the woman began to yell at him because of his hat before the recorded encounter.

After the video went viral, Santos told media in the Boston area that she regrets what happened, but she claims she was provoked.

She was arrested on an assault charge.

WCVB reported Tuesday that Santos is a citizen of Brazil who is in the country unlawfully. She was arrested by an ICE Fugitive Operations Team the day before.

"She is presently in ICE custody and has been entered into removal proceedings before the federal immigration courts," an ICE spokesperson told the station.
Report a correction or typo
Related topics:
societymassachusettsdonald trumpassaultu.s. & worldpoliticspresident donald trumpcaught on camera
Copyright © 2021 KTRK-TV. All Rights Reserved.
More Videos
From CNN Newsource affiliates
TOP STORIES