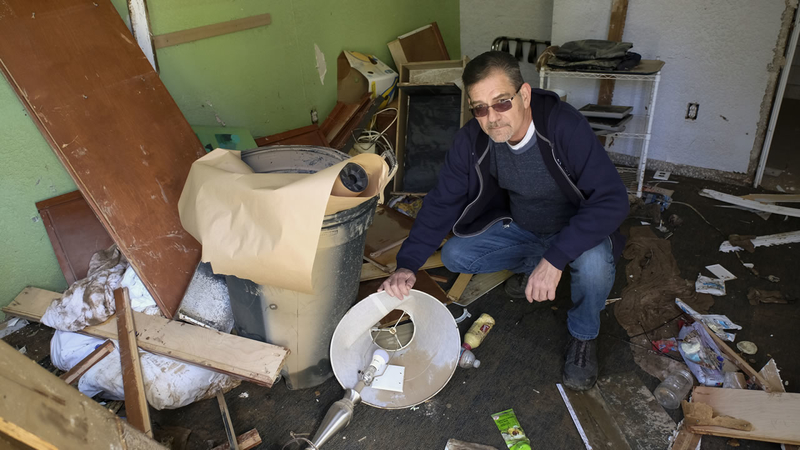 GUERNEVILLE, Calif. (KGO) -- For a dumpster diver, the streets of Guerneville, right now might be paradise.

But when it's your stuff, or that of your friends, and still piled high after a flood -- not so much.

"This is going to take months," said Larry Boeger, 12 days after the disaster that he hopes FEMA officially declares. "I am not wanting to be a political football. They need to come help us."

On Monday, Sonoma County sent garbage trucks to remove flood flotsam lining the streets of Guerneville, Monte Rio, and elsewhere along the Russian River. "It is unbelievable how much stuff is in the streets. It may be a record breaker in terms of all the debris removed," said supervisor Lynda Hopkins.

Sonoma County will spend $2.5 million in the process. And that only begins to describe issues, here.

Jeff Bridges owns the R3 Hotel. Before getting his flood garbage into bins, he still needs to remove it from the 19 of 23 rooms ruined by high water.

"One of the problems for the dumpster people is finding a clean spot to put the dumpster," he said with a wry laugh.

The R3 Hotel in #Guerneville ---19 of 23 rooms ruined by the #RussianRiver Flood. Owner Jeff Bridges says he is doing better than most people around here. They want help from @femaregion9 #abc7now pic.twitter.com/JxHspRoIwW

Yes, in places, so much remains that drivers feel challenged to find a parking spot. The damage remains overwhelming.

Consider the Stumptown Nursery, owned by Dorothy Hagan. Sixteen feet of floodwater lifted two of her buildings off of their foundations and planted them elsewhere.

The Stumptown Nursery in Guerneville. 16 feet of floodwater from the #RussianRiver moved two buildings off of their foundations. #abc7now pic.twitter.com/NL74OF0WdY

Back at the R3 Hotel, Jeff Bridges found a couple of flood survivors in his swimming pool. Two koi fish somehow made it from his pond, through the bar the relative deep.

"They were lucky. Could have gone anywhere."