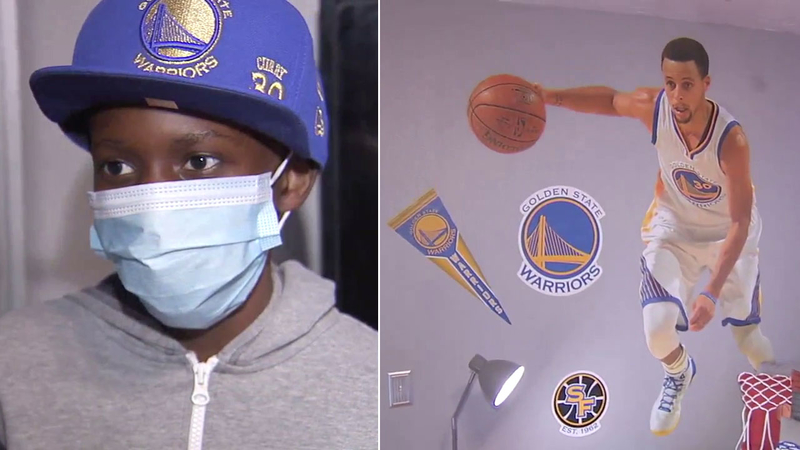 Jaylen Winzer received a warm welcome home from his family and friends. The seventh grader is still undergoing treatment for osteosarcoma, a type of bone cancer.

"His cancer has spread throughout his whole body, so we're working with doctors and we are in prayer. We're asking everyone to keep us in prayer," his mother, Marcedes Fugett, said.

While Jaylen was at CHLA, his bedroom received a surprise basketball-themed makeover, with an emphasis on his favorite team and player: the Golden State Warriors and Steph Curry.

"I didn't think there would be this much people here and it was better than I expected," Jaylen said.

The remodel was made possible by Jamie and Shirell Henderson's foundation Britticares. Their daughter died of bone cancer when she was 13 and also attended Jaylen's school. It was her dream for other children to have a special bedroom to come home to after being in the hospital.

Britticares operates on donations and the cost of remodeling Jaylen's room was about $8,000. They even made the floor look like a basketball court.

"These people - they work hard, day and night. Thank him and his team for coming out and just putting in major work," father Calvin Winzer said.

Jaylen's old room was basic, but now he has a basketball bedspread, Steph on his wall, a basketball fan and even a mini Warriors bench.

Jaylen has chemotherapy every other week and will soon undergo surgery to remove a tumor. Once he recovers, he'll have plenty of time to perfect his 3-pointers.