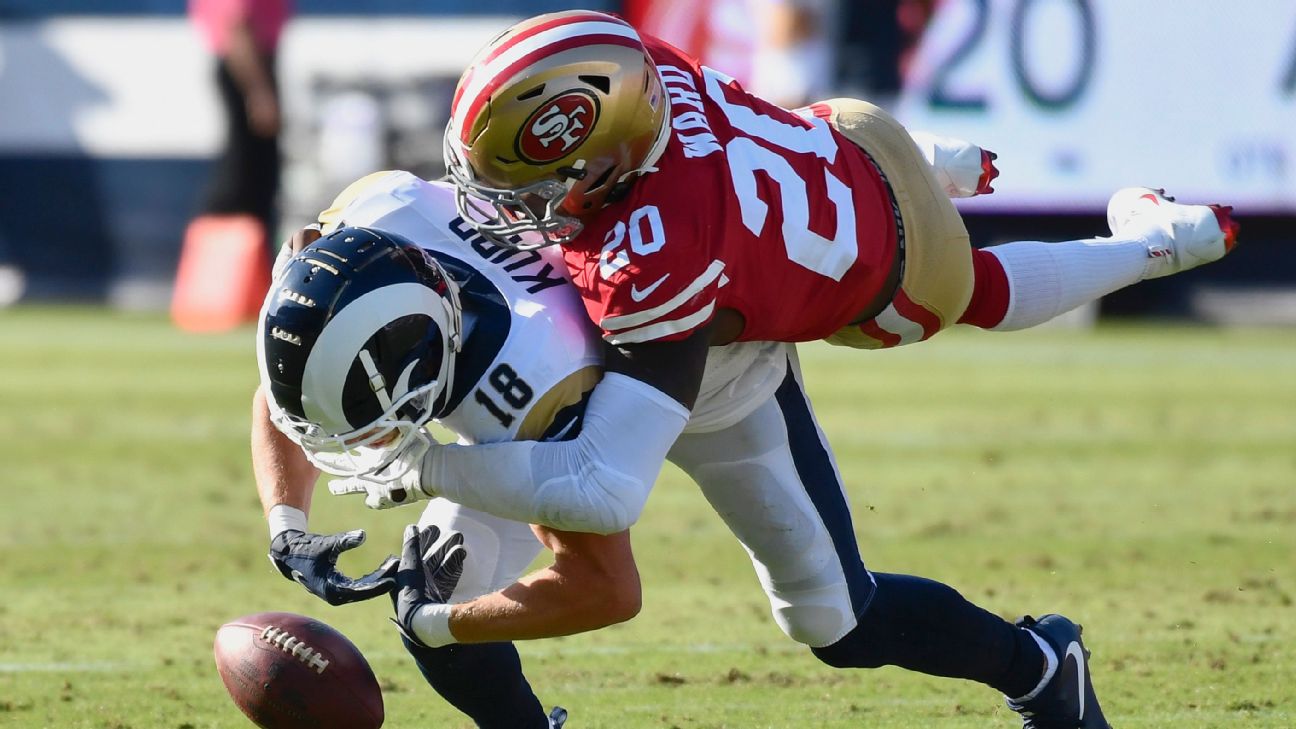 SANTA CLARA, Calif. -- After a pair of significant moves on their defensive front Monday, the San Francisco 49ers closed the day by taking another big step toward keeping their defense largely intact, as they agreed to terms on a three-year, $28.5 million deal with free safety Jimmie Ward, according to a league source.

The deal was first reported by NFL reporter Adam Caplan.

Ward, a longtime favorite of coach Kyle Shanahan and defensive coordinator Robert Saleh, gets to stay with the only NFL team he has ever known. As the offseason began, that's something Ward was hoping for, even though he was unsure if it would pan out.

"I have no clue what's next," Ward said in February. "The offseason is like a wild card. I would love to stay with the 49ers, but you never know. They've got a lot of great guys on this football team. They've got to lock some guys in, too, so I don't know.

"They know they've got the upper hand in this situation. I've been here for six years. It just depends on what happens. Business is business."

Business got taken care of Monday night, as the 49ers struck a deal to keep Ward on the day they re-signed defensive lineman Arik Armstead and traded defensive tackle DeForest Buckner to the Indianapolis Colts. Once those other two pieces of business were taken care of, the Niners turned their attention to keeping Ward, a move that a year ago would have seem far-fetched but became a priority after his strong 2019.

After five seasons of dealing with a variety of injury issues, Ward was finally healthy and able to deliver on his potential last season. He missed the first three games because of a broken finger but didn't miss any time the rest of the way and posted the best season of his career.

Ward, who turns 29 in July, started all 13 games in which he appeared last season, finishing with 60 tackles, 1 sack and 8 passes defended. Then he had 13 tackles and a forced fumble in three playoff starts.

Ward's solid season came after he signed a one-year "prove-it" deal that left fans wondering why the Niners continued to believe in him after years of injuries.

The 49ers used the No. 30 overall pick on Ward in 2014. He has played in 64 games since then, posting 246 tackles, 3 sacks, 2 forced fumbles, 2 fumble recoveries and 2 interceptions while playing every cornerback spot and free safety, the position he settled into for the 2019 season.

That breakthrough season left Ward believing that his best football is still ahead of him. That's football he'll get to play in San Francisco.

"It was cool," Ward said after the season. "I still don't feel like it was a great season for me. I feel like I showed people that I can just be healthy. That was the main thing for me. I'm going to make plays, but that big season that I really want is going to happen. I'm only going to be better."

With Ward in the fold, the Niners have 10 of their 11 primary defensive starters from last season under contract for 2020, the exception being Buckner. Ward is also now the longest-tenured player on the San Francisco defense.
Report a correction or typo
Related topics:
sportsespnnewsjimmie wardsan francisco 49ersnflnfl free agency
Copyright © 2020 ESPN Internet Ventures. All rights reserved.
More Videos
From CNN Newsource affiliates
TOP STORIES
1 killed after officer-involved shooting in Oakland