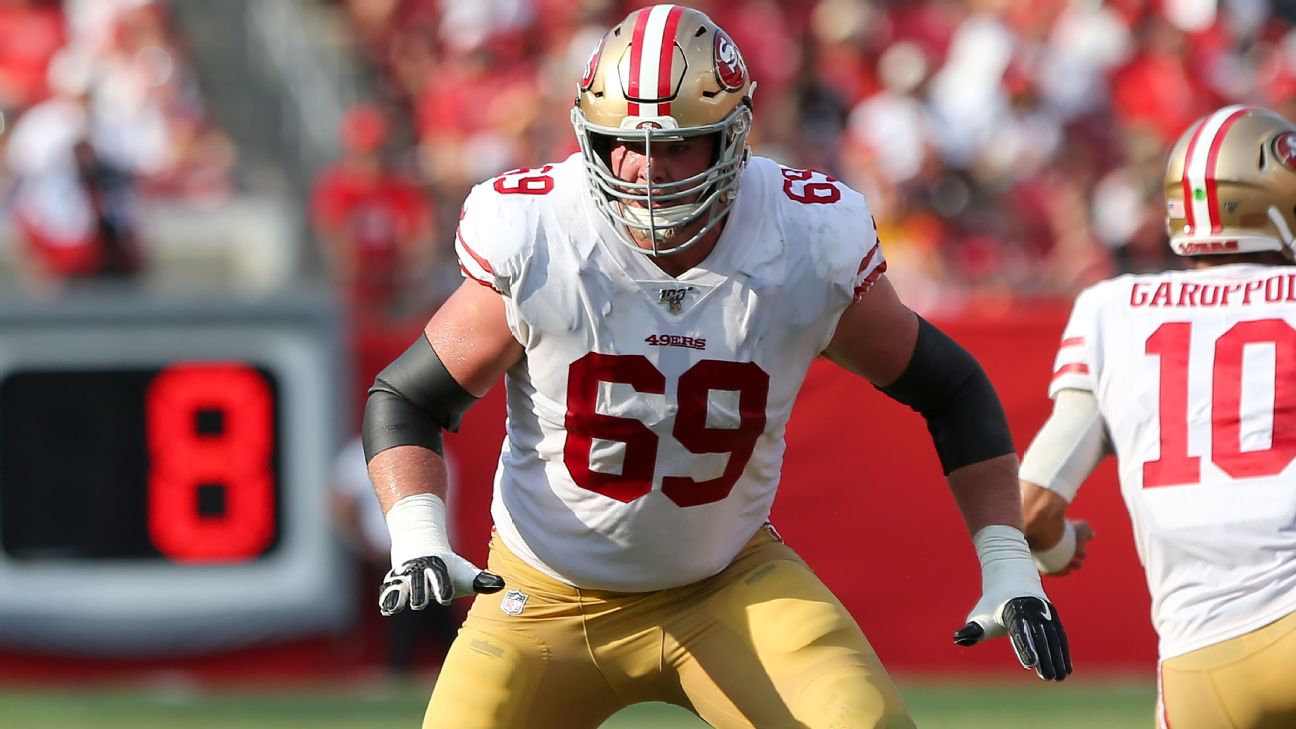 SANTA CLARA, Calif. -- For the second time in as many days, the San Francisco 49ers' offense suffered a major blow, this time losing right tackle Mike McGlinchey for a month-plus to a right knee injury.

One day after announcing that fullback Kyle Juszczyk would be out for four to six weeks with a left knee sprain, Niners coach Kyle Shanahan revealed Wednesday that McGlinchey is set for arthroscopic surgery Thursday on his right knee and would miss a similar amount of time.

McGlinchey joins Juszczyk and left tackle Joe Staley (broken fibula) as key components of the 49ers' offense dealing with injuries not severe enough to end their season but serious enough to keep them out for extended time.

As with Juszczyk's absence, the loss of McGlinchey is a particular blow to the Niners' top-ranked run game.

"Mike's done a good job," Shanahan said. "He's had some more challenges than he had last year ... but Mike has done a real good job. That's one of the main reasons we've been running the ball so well."

According to Shanahan, McGlinchey initially suffered the injury Monday night when he and receiver Deebo Samuel got tangled up, and it was made worse later when McGlinchey's knee got rolled up on.

After the game, Shanahan expressed confidence that McGlinchey was going to be OK, though he had taken McGlinchey out of the game for precautionary reasons. Shanahan said Wednesday that confidence was rooted in McGlinchey's own feelings about the injury after he had attempted to stay in the game and insisted after that he was fine.

There was plenty of reason to believe him, too, considering that McGlinchey has never missed a football game because of injury at any level.

"He didn't take himself out," Shanahan said. "He was limping a little bit, which he does a lot of games because those guys are linemen and that does happen and as long as there's no bad damage, they're usually all right. But he kept up with it ... He came in the next morning and he was hurting a little bit more and when they checked it out, it was a surprise to him and to all of us."

In McGlinchey's absence, the 49ers will turn to first-year offensive lineman Daniel Brunskill to start at right tackle. Brunskill replaced McGlinchey on Monday night and made a brief appearance for him after an equipment issue forced McGlinchey to the sideline in Week 3 against Pittsburgh.

All told, Brunskill, whom the Niners discovered in the Alliance of American Football and who went on to win a roster spot in the preseason, has played just eight offensive snaps in NFL regular-season games.

As with rookie left tackle Justin Skule, who replaced Staley after his injury, Shanahan has confidence in Brunskill.

"I didn't know much about him until he got here in the OTAs and training camp and got to see him then and I became a believer," Shanahan said. "He was No. 61 for a while for me and then he became Brunskill because he was low on the radar as it started out but he earned his spot on this team and did a real good job and that's why he was on the team and he wasn't on practice squad ... [he's] very similar to Skule in that the game is not too big for him, he's very efficient, he's a smart player. He'll got the job done and he'll be ready for the challenge."

Behind Skule and Brunskill, the 49ers also have veteran Sam Young available to provide depth. Young was with the team in camp, was released and then was re-signed after Staley's injury.

As for adding a player from outside the organization, Shanahan said the Niners would always look for help in situations such as these but indicated the market isn't exactly brimming with options.

Asked directly about Washington Redskins offensive tackle Trent Williams, who is mired in a lengthy holdout, Shanahan said he couldn't comment directly on players under contract with another team.

But he did seem to imply that speculation that Williams is not on the trade block is accurate.