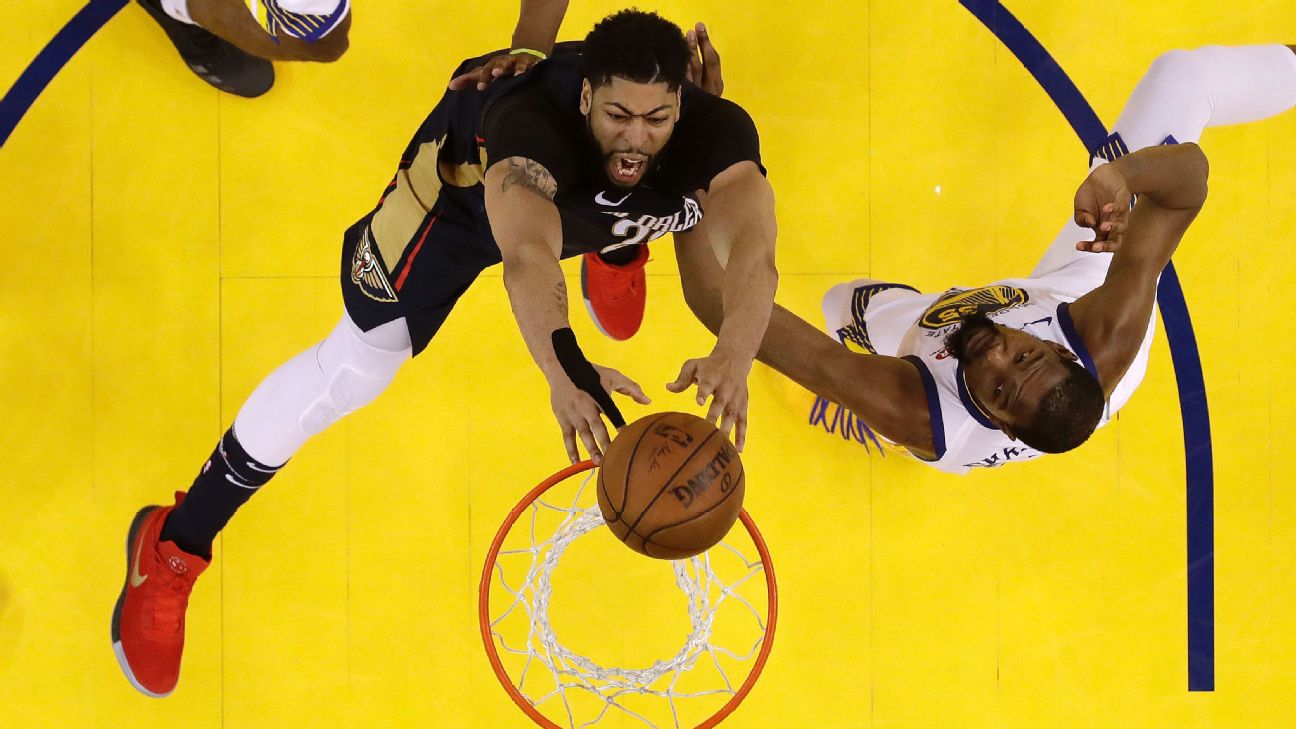 OAKLAND, Calif. -- Can you see DeMarcus Cousins possibly returning to the New Orleans Pelicans as a free agent next offseason?

"He will be a free agent next year. Hopefully, down the line we can reconnect," Davis told ESPN's The Undefeated on Wednesday night after a 131-121 loss to the Golden State Warriors.

Such talk from Davis about Cousins again joining him with the Pelicans could also be good news about the five-time All-Star's future in the coming years in New Orleans.

There have been months of speculation about Davis possibly playing in Los Angeles for theLakers or the Clippersin the coming years. And Davis' recent hiring of agent Rich Paul, who also represents LeBron James, didn't calm that talk. However, Davis told ESPN's The Undefeated he is still under contract with New Orleans through the 2020-21 season and he is not the source of the departure rumors.

"I got two years to '20-21. I'm here and whatever happens after that happens," Davis told ESPN's The Undefeated. "For me, right now it is about being the most dominant player in the league and helping this team win.

So, could the Pelicans re-sign Cousins? Yes, but it's complicated for a couple of reasons.

Cousins, a four-time All-Star, is in the midst of a one-year, $5.3 million contract with the Golden State Warriors and will be an unrestricted free agent next summer. The center's career in New Orleans was cut short when he tore his left Achilles tendon last season.

He has yet to debut with the Warriors this season, but he is back practicing without contact.

New Orleans would have to lose Julius Randle and Nikola Mirotic in free agency next summer to create the needed salary cap space to sign Cousins. Randle would have to decline a player option for next season, and Mirotic will be an unrestricted free agent.

By losing those two players, New Orleans would create $25 million in salary cap space -- which could be enough to re-sign Cousins, according to ESPN's Bobby Marks.

Cousins is aware of Davis' interest in his re-signing with New Orleans, a source said.

Cousins was in the MVP conversation after averaging 25.2 points, 12.7 points, 5.4 assists and 2.2 3-pointers made in 48 games last season. The Pelicans made a major statement when they beat the then-Western Conference-leading Houston Rockets 115-113 on Jan. 26 for their fourth straight win and seventh victory in nine games.

Cousins, however, suffered a season-ending left Achilles tendon tear in that game against the Rockets. After eventually acquiring Mirotic to replace Cousins, New Orleans finished the regular season with a 48-34 record and a second-round playoff exit.

"Of course, it was a s---ty situation," Davis said. "But I felt like we had something going. I think if he would have played in the playoff series against the Warriors it would be different."

Pelicans coach Alvin Gentry offered strong respect for a still-injured Cousins before New Orleans' loss to the Warriors on Wednesday, and Cousins has said that he was fond of Gentry.

Davis, Gentry and Cousins had an animated discussion after the Pelicans' loss to the Warriors that Gentry said was just old friends laughing and trash-talking.

"I think the world of him," Gentry said. "I think he is the best player at his position in the league."

Another issue is that Cousins and Pelicans general manager Dell Demps have a relationship in need of repair and have not spoken since Cousins' departure, sources said.

The New York Times reported Demps offered a two-year, $40 million contract to Cousins after his injury, but the offer was declined. Both sides were so far apart at that time, a source said, that Cousins' side declined and opted for a fruitful free-agency market.

Cousins told The Undefeated that he had no major contract offer from any NBA team when free agency began July 1 and that teams were worried about his Achilles tendon injury.

Also on July 1, the Pelicans reached an agreement to sign Randle to a two-year, $18 million contract that included a player option on the second year. At that time, Randle told The Undefeated that he thought Cousins potentially could return to the Pelicans.

With no major financial offers from any team, Cousins previously told The Undefeated he made a "power move" by agreeing to sign a one-year, $5.3 million contract with the two-time reigning NBA champion Warriors on July 3. Davis said he was on his couch when he got the surprising news and initially had a hard time getting Cousins on the phone afterward.

"I tried to call our GM," Davis said. "He said he had no idea. I tried to call 'Cuz' [Cousins], but something happened with his phone. It sucked that it happened. But life goes on. ...

"I know the situation [Cousins] was in. He had to make a business move for him and his family. He had to do what was best for his career. You can't do nothing but respect it."

Shortly after, Cousins said he and Davis talked honestly about it all.

"I had a heart-to-heart talk with him after everything went down and he knows where I stand," Cousins said. "He knows I'm not the person to ever blow smoke or lie on a situation. With our time together, I'm sure he can validate that."

"My [question] for Dell is, why won't he take questions from the media about the conversation we had on the second day of free agency?" Cousins told The Undefeated.

Demps told Cousins during a phone conversation on July 1 that while he wasn't closing the door on re-signing Cousins, he did not have a contract offer for him at that time, an NBA source said. Cousins also has previously said no offer was made by Demps on July 1.

Despite the lack of an offer, a source said the Pelicans were still interested in Cousins. Demps and Gentry expected to meet with the center in Las Vegas to discuss both on-court and financial expectations, as ESPN's Zach Lowe reported the Pelicans still had $13.7 million available at that time.

The Pelicans' tentative face-to-face meeting was canceled after Cousins committed to sign with the Warriors, a source said.

"I like DeMarcus as a player. I root for him. I wish him the best," Demps told The Undefeated.

Cousins' departure has not changed his friendship with Davis -- Davis described Cousins as "my brother." The two former University of Kentucky stars still talk regularly. They were hoping to hang out Tuesday night in the Bay Area but scheduling didn't work out.

Time will tell if they will be able to hang out as teammates again.

"We're family. I love that dude," Davis said. "I'm happy for him. He has a chance to compete with guys who are running the league right now. For him to have a chance to get his first taste of the playoffs and get a ring, I am happy for him."

Said Cousins: "That is my bro for life, no matter what circumstance. I got love for him and his family."

Kerr wants Cousins to win a championship
Steve Kerr opens up about DeMarcus Cousins being a one-year rental and how wrong the perception is about him around the league.
Report a correction or typo
Related topics:
sportsespnjulius randledemarcus cousinsgolden state warriorsanthony davisnbanikola miroticnew orleans pelicans
Copyright © 2021 ESPN Internet Ventures. All rights reserved.
More Videos
From CNN Newsource affiliates
TOP STORIES
Lawsuit filed against Bank of America for unemployment fraud
Here's why seniors must wait for the COVID-19 vaccine