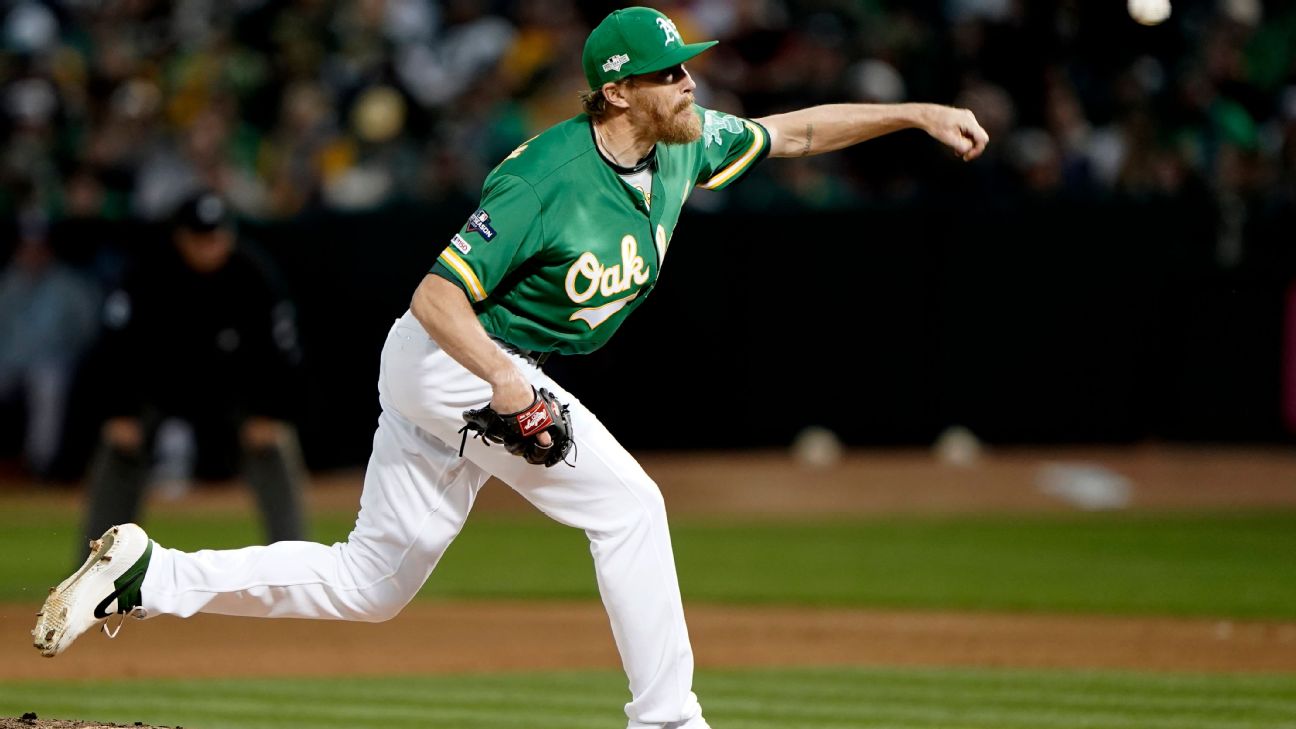 OAKLAND, Calif. -- Jake Diekman has serious questions about Major League Baseball's ability to pull off a season, given the issues in getting timely test results that have forced delays and cancellations of workouts.

For now, Diekman, 33, still plans to play, but he must be extra careful, given that he has the autoimmune condition ulcerative colitis.


"Once the regular season hits, there's no way I'm opting out, but if they don't get the testing figured out, then this whole thing will get shut down," he said Tuesday. "During the season, there's no way we can go 72 hours or longer without knowing our result. There's just no way. There's no way that can possibly happen and this be safe for all 60, 70 days or whatever it is."

TheOakland Athleticslefty also said, "I'm high-risk, so I'm going to have to speak out. I don't want to get sick." He represents others who must take additional precautions because of underlying conditions.

"There's a little part in everyone's mind that thinks this whole thing's going to get shut down," Diekman said. "I think everyone has a little bit of fear. They might not say it, but there's a little bit of fear in everyone's head that that might happen because if they don't get this figured out, you can't have teams not practicing a day or two in a row, and they have two weeks until the regular season starts. There's just no way that should happen.

"If guys aren't thinking that way, I just feel like you need to be somewhat of a realist."

Across San Francisco Bay, the Giants had to cancel their planned workout Tuesday at Oracle Park because results from tests administered Saturday hadn't been received. Manager Gabe Kapler hoped to get his club back on the field Wednesday.

"Nobody expected this to be easy, and everybody is doing the best that they can," Kapler said.


Diekman realizes that the Utah lab administering results is backlogged and facing daunting demands, including upwards of several thousand tests per day. But he says they need to get things figured out.

"I don't really get it," he said. "I hope that they get the testing figured out."

"There are two teams, maybe more, that aren't even going on the field today. That just can't happen," Diekman said. "I have no idea what else to say. In a perfect world, there would be zero, but this is the first time they've probably ever done this. This lab is probably getting anywhere, I don't know how many they're getting a week.

"I know they're trying their hardest, but I don't know if that's good enough for right now. It's a little worrisome. Say we go on a 10-day road trip, and we only get results one time. That's not very good with 45-to-50 people in a clubhouse at one time."
Report a correction or typo
Related topics:
sportsespnnewsoakland athleticsmlbjake diekman
Copyright © 2020 ESPN Internet Ventures. All rights reserved.
More Videos
From CNN Newsource affiliates
TOP STORIES
1 killed after chase, officer-involved shooting in Oakland