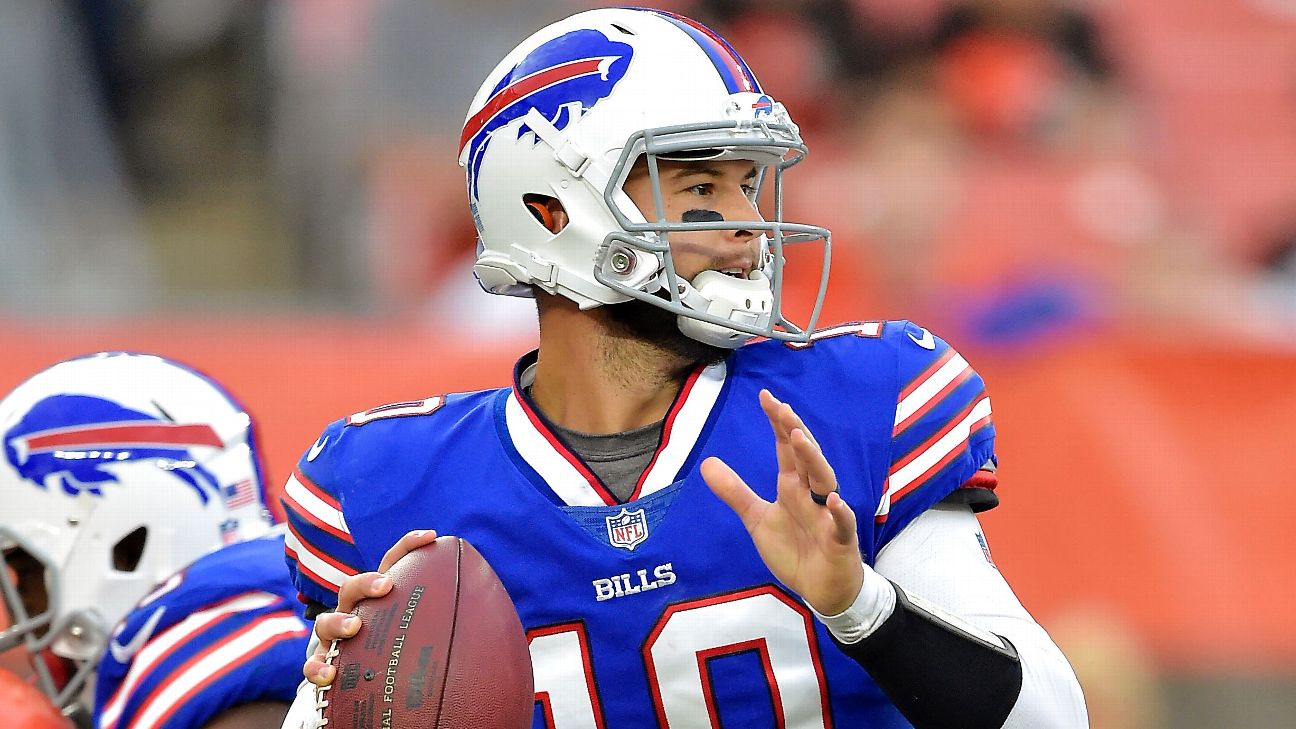 The Buffalo Billstraded quarterback AJ McCarron to the Oakland Raiders for a 2019 fifth-round draft pick on Saturday.

The Raiders, who will owe McCarron his fully guaranteed, $900,000 base salary this season, also waived quarterback Connor Cook on Saturday.

In March, the Bills signed the 27-year-old McCarron to a two-year, $10 million contract, which included a $4 million signing bonus, after trading starting quarterback Tyrod Taylor to the Browns.

McCarron can also earn an additional $4.5 million this season in playing-time incentives from the Raiders.

The Bills now are down to a choice between Nathan Peterman and rookie Josh Allento be the team's starting quarterback for Week 1.

Peterman completed 33 of his 41 passes this preseason for 431 yards, three touchdowns and one interception. Allen completed 24 of 44 passes for 210 yards and two touchdowns.

If the Raiders choose to keep him next season, McCarron will earn a $1.9 million base salary that becomes fully guaranteed on the fifth day of the 2019 league year, as well as a $3 million roster bonus that is due on the third day of the league year.

McCarron's departure from Buffalo does not come as a surprise after the fifth-year quarterback played Buffalo's entire preseason finale, as Peterman and Allen were among a group of starters and core players who did not play that game.

However, coach Sean McDermott told reporters that McCarron remained in the mix to start in Week 1 after he led Buffalo on four touchdown drives in the fourth quarter for a 28-27 win Thursday over the Chicago Bears.

"It's just one of those feelings you can't explain," McCarron told reporters, according to The Buffalo News. "First I said, 'Watch this, we're going to go down and win. You're going to remember this for a long time. This is going to be legendary for us, our group.'

"Final game together, it's part of the business not knowing who's here tomorrow and what not. I'm just super proud of the guys. That was just awesome to battle with them. Probably the most fun I've ever had."

McCarron was 13-of-34 for 156 yards and three touchdown passes in the win against the Bears. He also threw two interceptions and rushed for 54 yards -- and a touchdown -- on six carries.

McCarron went wire-to-wire in the preseason finale after he did not play in the Bills' third preseason game. He suffered a right shoulder injury on Aug. 17 against the Cleveland Browns, when he completed 3 of 6 passes for 12 yards.

In the Bills' preseason opener, McCarron led the second-team offense and finished 7-of-10 passing for 116 yards.

Peterman and McCarron alternated practices leading the first-team offense through spring practices and into training camp until McCarron's injury caused Allen to be elevated in the quarterback rotation.

The Bills will take a $2 million dead-money hit against each of their 2018 and 2019 salary caps as a result of trading McCarron.