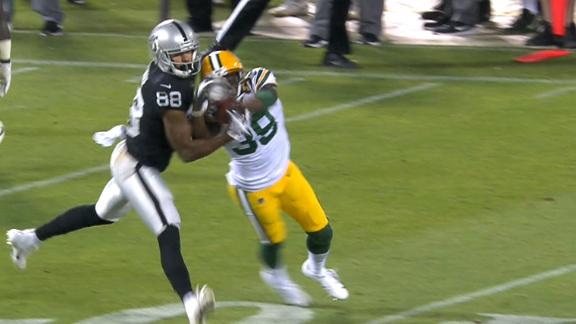 OAKLAND, Calif. -- Derek Carr showed enough in one drive of what used to be the dress rehearsal game in the preseason for coach Jon Gruden to shut him down until Oakland's season opener.

Green Bay coach Mike McCarthy didn't need to see anything at all from Aaron Rodgers.

Carr led a scoring drive on his only possession of a shorter-than-expected preseason appearance, and the Raiders beat the Green Bay Packers 13-6 on Friday night.

"I had seen enough," Gruden said. "There was not much more to see. The battle for us is who's behind Derek. ... I was very pleased with Derek and how he started the game."

Gruden had said earlier in the week that Carr and the offensive starters would likely play into the second quarter. But he pulled him after an opening drive that ended when Reggie Gilbert bull-rushed right tackle Donald Penn into Carr, leading to a sack and fumble that Carr recovered.

The Packers rested Rodgers and the rest of the offensive starters. They were held to two field goals and 228 yards of offense behind backups Brett Hundley and DeShone Kizer.

"We wanted to get some things done offensively. Didn't accomplish that," McCarthy said. "The obvious is the penalties kind of were the theme for the evening. It was a sloppy football game."

The Raiders won when Chris Warren III scored on a 1-yard run with 5:07 to play.

Carr went deep on the opening play, completing a 49-yard pass to Amari Cooper following a play-action fake. The Raiders moved to the 4 before the sack ended the drive and led to a field goal.

Carr then went to the bench after playing just two series the entire preseason. He's expected to sit out next week at Seattle and not play again until the season opener against the Rams on Sept. 10.

"If we practice at the speed that we do, I feel you can go out in the preseason and play a couple of plays here and there and be ready for the regular season," Carr said.

Backup Connor Cook struggled, going 6 for 15 for 72 yards and throwing a pass that was intercepted by Green Bay rookie Jaire Alexander . Cook threw another interception that rookie Josh Jackson returned for a TD, but that got overturned by a defensive hold on the other side of the field.

E.J. Manuel also turned the ball over in the second half and Gruden said he wasn't sure his backup quarterback was currently on the roster.

"They were getting around our edges a little bit," Kizer said. "It required me to step up here and there. I was trying to avoid some sacks, trying to keep the ball in play and have some positive plays. That's part of the game, being able to fight adversity."

In warmups, Carr and Rodgers took the opportunity to throw to old teammates who are now on the opposite team. Carr threw to his former Fresno State teammate Davante Adams and Rodgers warmed up with former Packers receiver Jordy Nelson.

"Derek threw Davante one and Aaron threw me one," Nelson said. "It's pretty rare to have that setup. It was fun to see those guys."

Raiders running back Marshawn Lynch once again sat during the national anthem. Lynch also sat for the anthem all of last season but never gave a reason for his decision. No other players on either team demonstrated during the anthem.

There was one penalty under the new rule prohibiting players from leading with their helmets. Oakland S Marcus Gilchrist was called for the infraction on a tackle against Lance Kendricks in the second quarter.

Packers: LB Oren Burks got hurt during warmups and didn't play. ... RB Ty Montgomery left in the first quarter with a foot injury.

Raiders: DE Bruce Irvin was excused from the game for a personal matter.