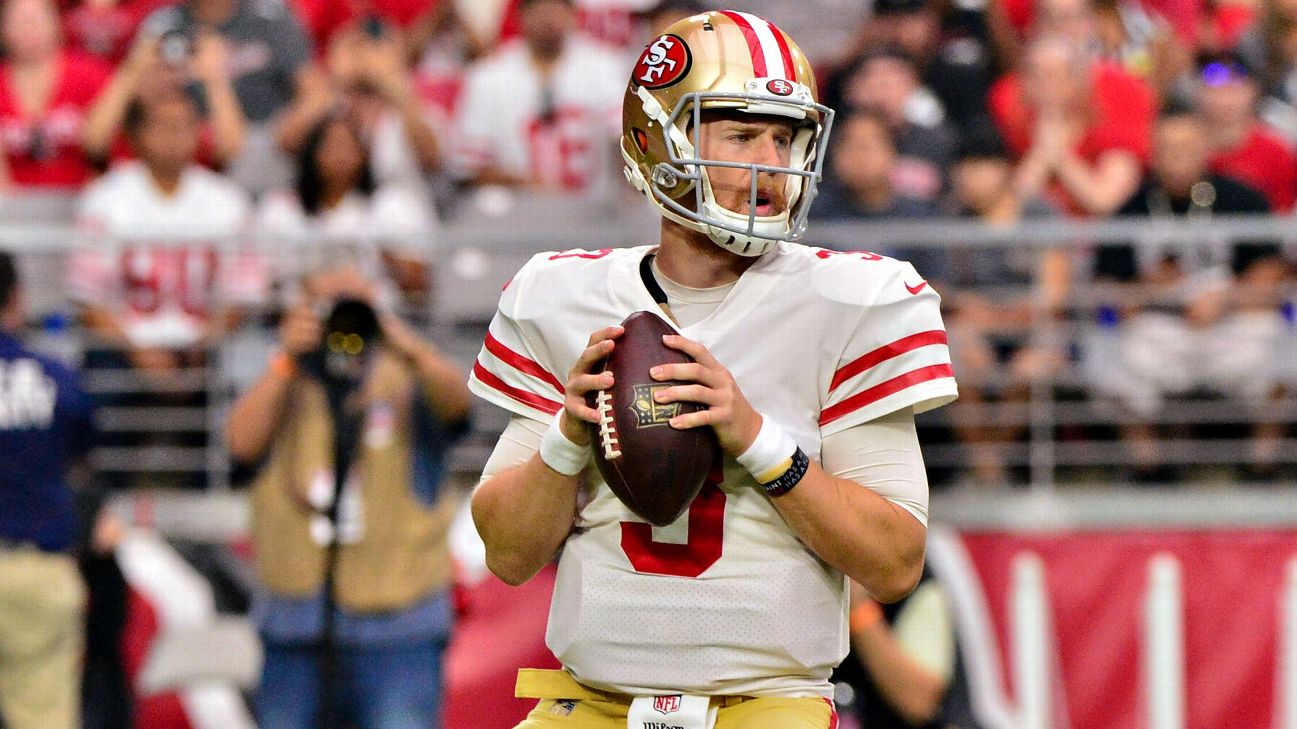 SANTA CLARA, Calif. -- Given about four days to recover from a wrist injury suffered on Sunday, San Francisco 49ers quarterback C.J. Beathard is officially listed as questionable for Thursday night's home game against the Oakland Raiders.

A source told ESPN's Adam Schefter on Thursday that Beathard is "truly 50-50" for the game.

Beathard injured his right (throwing) wrist and thumb in the second quarter of last week's loss at the Arizona Cardinals when he banged his hand on a defender's helmet as he followed through on a throw over the middle. Beathard played through the injury, something he attributed to adrenaline, but was unable to grip a football as recently as Tuesday.

Although the 49ers haven't had a full practice this week, Beathard was listed as a nonparticipant on Monday and Tuesday and a limited participant Wednesday on the team's estimated injury reports.

If it had been a normal week, Beathard would likely be ready to play, but the short work week has his status up in the air until closer to Thursday's game time.

"C.J. would be good if we were playing on Sunday," Niners coach Kyle Shanahan said Tuesday. "But it's going to be a test for Thursday and probably won't know until then."

Beathard had X-rays after the game in Arizona that revealed he did not sustain any broken bones. On Tuesday, Beathard spoke to the media with a large wrap on his right hand and thumb but said he was hoping to play against the Raiders.

If Beathard is unable to play, the 49ers will turn to Nick Mullens to make his first NFL start. Mullens, who was an undrafted free agent in 2017, has been with the Niners as long as Beathard, but Mullens' playing time in games has been limited to the preseason.

The Niners also ruled out starting linebackerReuben Foster (hamstring) and strong safetyJaquiski Tartt (shoulder). They will not play Thursday night.

Mullens has spent most of his time on the Niners' practice squad, but he was elevated to the active roster to be Beathard's backup after Jimmy Garoppolo suffered a season-ending knee injury in Week 3 at the Kansas City Chiefs.

"Nick works his tail off, whether he was on practice squad all last year, some of this year, since he's been the 2," Shanahan said. "Nick's a very smart guy who works at it nonstop. He'll be able to go in there and execute the offense and knows what he's doing."

While Mullens got plenty of work in the preseason, his snaps have been limited to scout-team work since Garoppolo suffered his injury. Without those reps, Mullens said he tries to play games out mentally, since he can't get the physical reps.

"That's the challenge of being a backup," Mullens said. "You don't get a lot of reps, but you have to keep yourself mentally sharp throughout the week. So, really just playing the game in my head, that's kind of what I do. I go home, see what plays we have in for the week and just play the game in your head before it actually plays out."

After Thursday's game against the Raiders, the Niners don't play again until Nov. 12 on Monday Night Football against the New York Giants. From there, they won't compete again until Nov. 25, following a bye, so there should be plenty of time for Beathard to heal up over the next few weeks.

If Beathard is out, Shanahan said Mullens is capable of handling anything from the playbook since he has had so much time in it. The same would not be true for Tom Savage, who is currently the No. 3 quarterback but would be Mullens' backup if Beathard can't play.

"Just the whole offense and everything, that would have to be limited just because that's too much for a guy to learn, any guy in the world to me, in this amount of time," Shanahan said of Savage. "Just spitting it out and calling the plays and getting everyone lined up and knowing where people are, so you'd have to scale back a little bit on that. He's been working hard.