Colin Kaepernick's parents break silence: 'We absolutely do support him'

ESPN
By Martenzie Johnson, The Undefeated 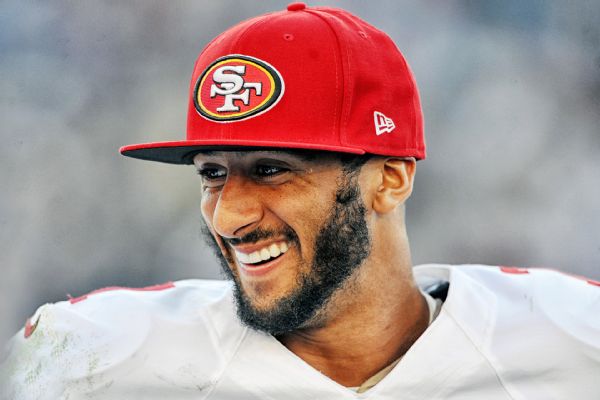 The parents of embattled San Francisco 49ers quarterback Colin Kaepernick have broken their silence on their son's decision to kneel for the playing of the national anthem this season.

"Colin is carrying a heavy load and following a difficult path that he truly believes in. He is putting his entire future and possibly his life on the line for those beliefs," Teresa and Rick Kaepernick wrote in a statement addressed to The Undefeated on Friday. "As his parents, it pains us to read articles and tweets saying that his family does not support him; this could not be further from the truth. We want people to know that we are very proud of our son and admire his strength and courage in kneeling for the rights of others."

Reached by phone Friday evening, Teresa Kaepernick said the couple initially wanted to avoid the limelight associated with making a public statement about their son but were shocked by the overwhelmingly false narrative that she and her husband don't support their son.

The Kaepernicks' support of Colin initially came into question after USA Today reported in early September that the family flew an American flag in front of their Modesto, California, home, an apparent statement of their displeasure with Colin. At the time, Teresa said, "It's not in our best interest or Colin's best interest" to make a comment. Colin later told reporters that his parents "agree with what I'm standing for."

More than three months later, his parents are finally ready to speak.

"Colin has chosen to kneel for the national anthem as a protest to the continuing racial inequality in this country," the statement read. "He has explained his reasons for this in multiple interviews, yet it seems some people still do not understand his point. For whatever reason, there are some who want to view this as an anti-military protest or an un-American stance. These views could not be further from the truth, but we know that people will believe what they wish to believe. The recent remarks (attacks) by Admiral Harris supported by the Pentagon are over the top, and we feel the desire to make a public statement in support of our son."

On Wednesday, Adm. Harry B. Harris, who heads the U.S. Pacific Command, made indirect comments against Kaepernick while addressing a crowd to commemorate the 75th anniversary of the attack on Pearl Harbor. "You can bet that the men and women we honor today -- and those who died that fateful morning 75 years ago -- never took a knee and never failed to stand whenever they heard our national anthem being played," he said.

"Our military takes an oath to support and defend the Constitution, and many have fought and died to defend our constitutional rights. Indeed after such sacrifice it is a reasonable expectation that all of our citizens enjoy life, liberty, and the pursuit of happiness," the Kaepernicks' statement read.

Rick and Teresa Kaepernick, who are white, adopted Colin when he was only 5 weeks old. The couple had lost two sons at birth to congenital heart failure and were not eligible to adopt a white baby from a private adoption agency. Then came along a tiny biracial baby boy who had recently been given away by his 19-year-old white mother. Teresa called Colin her "perfect child."

Four years later, the family (Rick and Teresa also have two other children) moved from Fond du Lac, Wisconsin, to Turlock, California, with the daunting task of raising a biracial boy in an all-white household in America.

From the beginning, the Kaepernicks reaffirmed to their youngest son that his different skin color was perfectly OK, and they never tried to make him white. They even drove him an hour out of town to get him cornrows when he was a teenager.

"I never felt that I was supposed to be white. Or black, either. My parents just wanted to let me be who I needed to be," Colin told Mr.Porter.com in Septermber 2015.

Teresa and Rick have had to stand up for their son for decades now, from strangers not realizing he was their child in his younger years, to a Sporting News columnist writing a racially charged story on Colin's abundance of tattoos within weeks of his first professional start during the 2012 season.

"It annoyed me," Teresa told USA Today after the column was posted. "You are categorizing this kid on something like tattoos? Really? ... That's how you're going to define this kid? It's pretty irritating, but it is what it is."

Added Rick: "Instead of saying that Colin does all these great things and donates his time to children, this guy is going to make him out like a gangster."

The 29-year-old quarterback has been under fire since late August, when football media noticed he wasn't standing for the national anthem during the 49ers' third preseason game against the Green Bay Packers. He initially told reporters he would not "stand up to show pride in a flag for a country that oppresses black people and people of color," and that "There are bodies in the street and people getting paid leave and getting away with murder."

Over the past months, Colin has expanded on his mission, stating that he will donate $1 million of his salary this season to organizations whose mission is to help communities of color. He has donated at least $200,000 so far.

While he has been criticized by members of the military like Harris, fellow NFL players and president-elect Donald Trump, Kaepernick also has received praise from high school and college athletes, a handful of WNBA teams, President Barack Obama, and a hashtag-full of other vets.

Colin's birth mother, Heidi Russo, scolded the quarterback on Twitter during the early days of his protest, tweeting, "There's ways to make change w/o disrespecting and bringing shame to the very country and family who afforded you so many blessings." In a subsequent tweet, she added, "The path less traveled doesn't need to be one of destruction. #beenthere #besmarter #berespectful."

Despite the negative press over the past four months, the Kaepernick family firmly stands behind Colin. They acknowledge that the current political and racial climate in America is not helping their son's cause but are hopeful the protest will evoke some form of change.

"When Colin first 'took a knee', his family was as surprised as anyone. We did not understand why he was doing this and were overwhelmed with the public reaction and hate. Colin not only received terrible racist tweets, but also received letters directly to our home similar to that recently received by [Denver Broncos linebacker] Brandon Marshall," the family's statement read. "We were truly shocked at the amount of racist hatred out there! Until this had occurred, we had naively believed that the racial atmosphere in this country was far better than it actually is. Prayer and talks with our son gave us a much better understanding of the reason for his protest and how we should view it."