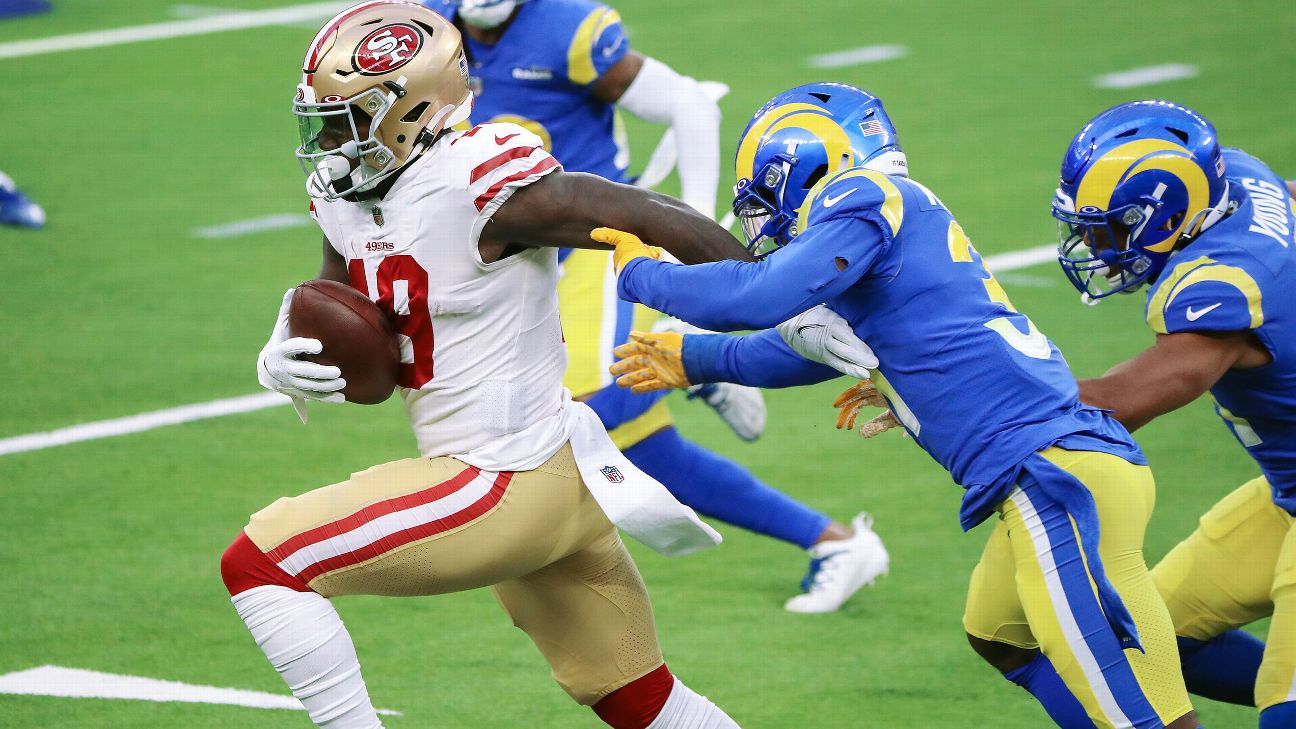 Nobody has a more stacked lineup of fantasy analysts and NFL team reporters than ESPN. It's the rare backfield by committee that is actually a good thing for fantasy managers. Every Tuesday, we'll ask our NFL Nation reporters a series of burning questions to help inform your waiver-wire pickups and roster decisions.

Receivers Jarvis Landry, Deebo Samuel and DeVante Parker all set season-highs for receiving yardage on Sunday. But they did it from the bench in some leagues. Landry and Samuel were started in less than 25% of ESPN fantasy leagues, while Parker was started in 62%.


Meanwhile, Minnesota Vikings rookie receiver Justin Jefferson has now had three standout performances in a row after a boom-or-bust start to the season. But he was started in only 69% of ESPN leagues in Week 12 and will still come with slight question when fellow WR Adam Thielen returns from the COVID-reserve list.

The question with all of them is: Can you trust them in your starting lineups once the fantasy playoffs begin? As always, our team reporters are here to help.

The first-round pick sure feels like a must-start at this point. He caught seven passes for 70 yards and two touchdowns Sunday for his third straight outing of at least 17.6 fantasy points in ESPN PPR leagues. And he now has four games with 20-plus points this year.

However, Thielen was also looking like a must-start before he went on the COVID-reserve list (he led the NFL with 11 TD catches through Week 11). And the run-heavy Vikings rank 29th in the league with just 29.1 pass attempts per game.

"I don't think it's any surprise that Jefferson's big numbers against the Panthers came on a day where Dalvin Cook struggled to produce his usual amount on the ground," Cronin said. "Minnesota is a run-first team, but that's not always going to work. And at this point of the season, the Vikings would be wise to rely more on Jefferson and Thielen to try and preserve Cook for a playoff push.

"But how can both Jefferson and Thielen each have big outings on the same day? For one, Minnesota has gotten comfortable running deep crossing routes with both of them to try and get a safety to bite on one receiver's route while the other is usually left with a one-on-one matchup. That's nothing new for this offense, as the Vikings used the same strategy with Thielen when Stefon Diggs was around."

If forced to choose one of them entering Week 13, Cronin said she would go with Jefferson, who accounts for 33% of the Vikings' receiving yards.

"He's shown he can handle the workload of a No. 1, and I don't see any reason for his spike in targets to decline anytime soon," Cronin said.

It took the five-time Pro Bowler 11 games to finally catch his first TD and notch his first 100-yard game of the season (8-143-1). But Cleveland Browns reporter Jake Trotter gave him a strong endorsement going forward.

"Landry had been relatively quiet in three games following the season-ending injury to Browns wideout Odell Beckham Jr. But that also came in three straight miserable-weather games," said Trotter, who pointed out that only Arizona's Larry Fitzgerald had been targeted more than Landry without scoring a touchdown this season heading into the weekend. "Sunday in sunny Jacksonville, he showed what he can still do."

"Even playing in a run-first offense, Landry is going to continue to get the bulk of targets from Baker Mayfield going forward. And he will be a receiver worth starting as you, like the Browns, attempt to make your push to the playoffs."

The 49ers' second-year receiver returned from a hamstring injury in dynamic fashion Sunday, catching 11 passes for 133 yards. But he comes with the full gamut of questions because of his injury history and the constant moving parts in San Francisco's offense. Rookie Brandon Aiyuk had started to establish himself as the Niners' go-to receiver before missing Week 12 on the COVID-reserve list.

"Here's the thing. It's so hard to predict how the Niners are going to operate when fully healthy on offense because -- wait for it -- they've never been fully healthy on offense this season," 49ers reporter Nick Wagoner said. "And when Aiyuk returns, they still won't be, because they will be missing tight end George Kittle and QB Jimmy Garoppolo.


"It's important to note that, because I think if the circumstances were different at quarterback, both Aiyuk and Samuel would be guys you could trust to start. ... They should and will, eventually, complement each other well. But with Nick Mullens at quarterback, I find it hard to give both of them a big thumbs-up every week, because he's just not consistent enough to get the ball to both of them regularly."

Wagoner said he thinks Samuel could be the more reliable fantasy option when healthy, because "he's so good at so many things, which allows the Niners to get the ball in his hands in so many different ways." He said Aiyuk is similar, but he's more of a refined receiver, which means he might "have to rely more on the guy delivering the ball to produce."

Parker has clearly established himself as the Dolphins' No. 1 receiver, especially since Preston Williams has battled injuries. But Dolphins reporter Cameron Wolfe also thinks Parker's fantasy value might be tied to the starting QB. Both of Parker's 100-yard games this season have come with veteran Ryan Fitzpatrick under center -- including Sunday's eight catches for 119 yards. But rookie Tua Tagovailoa is expected to get the job back when healthy.

"Parker has performed better with Fitzpatrick because the veteran has shown more of a willingness to throw him those 50-50 balls," Wolfe said. "As we saw Sunday, Parker can be a fantasy WR1 when given the chances. But Tagovailoa admittedly is trying to get more comfortable with throwing to receivers, like Parker, who don't get much separation. So, if Fitzpatrick is starting, Parker is 'set it and forget it' for me. If it's Tagovailoa, I'd be a little more hesitant to start him at this point."

Now for the rest of our weekly tour around the league:

Elliott finally had his first 100-yard rushing game in Week 11. Then, he followed up with his biggest dud of the entire year on Thanksgiving Day (10 carries for 32 yards, one catch for seven yards, his fifth lost fumble of the season).

"I'm not sure you can trust Elliott in fantasy lineups down the stretch, and I say that mostly because of the offensive line," Cowboys reporter Todd Archer said. "Zack Martin is out 'multiple weeks' with a calf injury, and Cam Erving is also out multiple weeks. Elliott's season has been a major disappointment on a number of fronts, including his inability to protect the ball. But the line inconsistencies have been a major part of it, as well.

"Three of their last five games are against teams with run defenses ranked in the bottom half of the league. Two are in the top 10. But how confident would you be in the ability to run the ball behind a line of Brandon Knight, Connor Williams, Joe Looney, Connor McGovern and Terence Steele?"

Another week, another leading receiver for the Jaguars. This time, it was rookie fifth-round draft pick Collin Johnson, who caught four passes for 96 yards and a TD -- essentially doubling his totals to 11-165-2 on the season. But when I asked Jaguars reporter Michael DiRocco if the team is just messing with fantasy managers at this point, he wasn't so quick to dismiss Johnson's breakout. Especially if veteran backup Mike Glennon gets more starts at QB.

"Johnson is an intriguing guy and might be worth a pickup in deep leagues if Glennon continues as the starter," said DiRocco, who pointed out that coach Doug Marrone hasn't named a QB yet for this week. "Johnson said those two worked together on the scout team this season and developed a pretty good chemistry. DJ Chark [ribs] and Chris Conley[hip] are banged up, and their availability is unclear. Johnson will get more reps if either is down, and he will be targeted more if Glennon is in the lineup."

Good news for Jacobs' fantasy investors: Coach Jon Gruden told reporters Monday that Jacobs was "confident he's going to be able to play" this week at the New York Jets after he suffered a sprained ankle Sunday at Atlanta. Unfortunately, Jacobs didn't produce much while playing hurt this past week (seven carries for 27 yards and three catches for 17 yards).


"Hopefully, our man Josh Jacobs is ready to roll," Gruden said, though he acknowledged that, "I don't think he was 100 percent yesterday. I think he tried to fight through it."

That included a hip issue that popped up on the Raiders' injury report late last week, according to Raiders reporter Paul Gutierrez.

Backup RB Devontae Booker could be a smart waiver-wire pickup because of the uncertainty -- and because of Booker's growing role in recent weeks. But Gutierrez said Gruden also intimated the Raiders could get backups Jalen Richard (illness) and Theo Riddick (COVID-reserve) back in the lineup this week.

Akers hasn't exactly gotten the same kind of breakthrough opportunity as other rookie RBs in recent weeks. But this is as close as we've seen in Los Angeles' three-headed timeshare.

Akers ran for a career-high 84 yards on nine carries Sunday and scored his first rushing TD after catching his first TD pass a week earlier. He still ranked third in snaps behind Malcolm Brown and Darrell Henderson, but it was a closer split of 25-20-17.

"Akers' recent usage in the red zone proves that the second-round pick from Florida State is earning trust from Rams coach Sean McVay in critical situations," Rams reporter Lindsey Thiry said. "And after Akers broke off a 61-yard run late in the game, it wouldn't be surprising to see McVay continue to increase his touches to maximize his potential late in his rookie season."

Speaking of backfields that are hard to decipher, Wolfe said there is "so much unknown" in Miami, where both Gaskin (knee) and Ahmed (shoulder) could return to the lineup soon.

"My early expectation is for it to be Gaskin returning to the starting lineup and getting the first bite of the running-back-by-committee load, with Ahmed and DeAndre Washington sharing the other bites," Wolfe said. "But I do think they will have more trust in Ahmed/Washington than they did with veteran backups Jordan Howard and Matt Breida early in season -- which feels weird to say. That might mean more of split, rather than Gaskin just being the no-doubt guy."

As ESPN's Saints reporter, I wouldn't worry about a timeshare developing in New Orleans' backfield (Latavius Murray's first 100-yard rushing game of the season came as a direct result of the Saints' switch to a run-heavy game plan after they found out Denver would have no quarterbacks available). I also don't think Kamara's lingering foot injury is a major issue.

However, there is legitimate reason to worry about Kamara's volume in the passing game while Drew Brees remains sidelined. Kamara has just one catch for minus-2 yards in two games with Taysom Hill at QB -- partly because Hill has attempted a total of 39 passes in those two games and partly because Hill looks to throw downfield more than Brees. Hill is also more likely to vulture TD runs away from Kamara (Hill has four of them over the past two weeks). So while Kamara is still a must-start in every league format, he might not be worth the same elite price in daily leagues until Brees comes back. 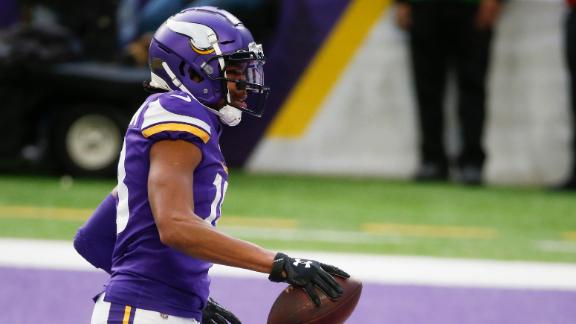 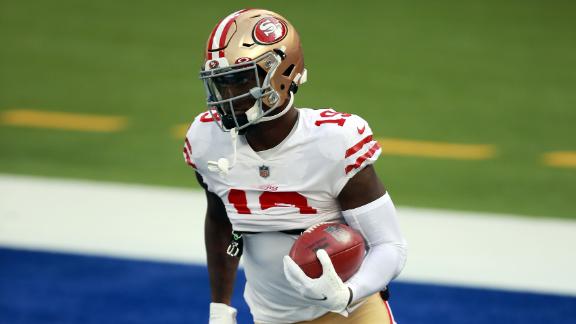 Deebo Samuel's performance vs. Rams a good sign for fantasy managers
Stephania Bell and Field Yates express how impressed they were by Deebo Samuel in Week 12, and both expect Samuel to find similar success in the 49ers' offense. 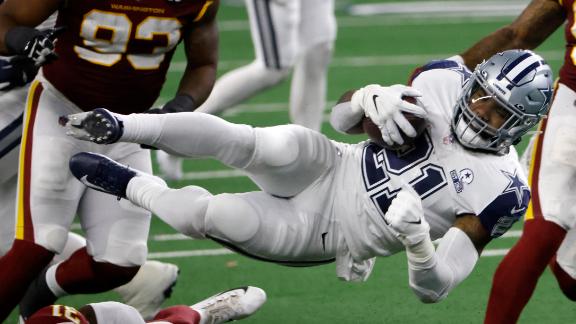 What to make of Zeke's fantasy value with depleted Cowboys
Field Yates thinks it will be tough sledding for the rest of the season for Ezekiel Elliott and the banged up Cowboys. 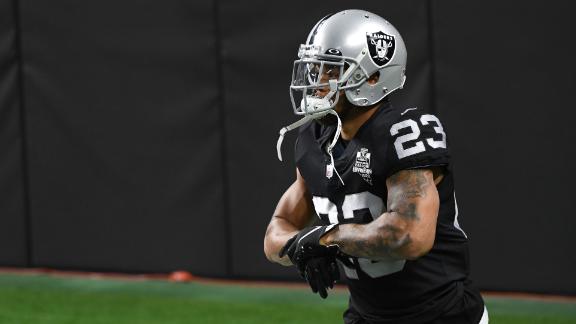 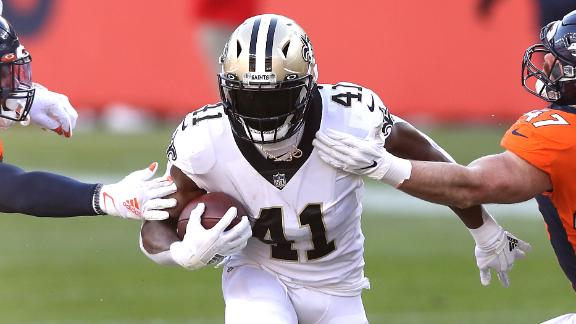