Former Oakland Raiders linebacker Aldon Smith has bailed out of jail after turning himself in to San Francisco police Tuesday following an alleged domestic violence incident that occurred Saturday.

Smith was booked Tuesday morning on misdemeanor domestic violence and other related charges.

He left County jail, rushing to a waiting car, after posting his $30,000 bail.

He did not talk to reporters so we don't know if he went back to the rehab facility where he was staying briefly before he surrendered.

The former 49er and now ex-Raider lineback surrendered Tuesday, having been on the run since late Saturday, when he allegedly assaulted his fiancee at her Nob Hill apartment.

She called 911 to report the incident after Smith fled.

Here's how the police radio dispatcher described what happened. "The suspect threw her around the room. He bit her on the wrist and climbed out the window."

San Francisco Police issued a warrant for his arrest but could not find him.

Then yesterday, Smith's fiancee told TMZ that Smith entered a rehab facility, after reaching out to her parents for help.

She told TMZ she still loved him and that she and her family wanted to help him through his issues.

A source says police successfully worked with his attorney to get him to surrender so he could be processed on the pending charges.Smith was drafted by the Niners some seven years ago but was released form the team in 2015 after a string of arrests, the last one involving a hit and run. He then joined the Raiders but was suspended for a year for a substance abuse violation.

The Raiders say they have now released Smith.

According to TMZ, Smith's friends say he was drinking every day and that his alcohol problem got so bad, they were afraid he would drink himself to death.

On Saturday, the day the domestic violence incident allegedly occurred, Smith is said to have drank two bottles of tequila. 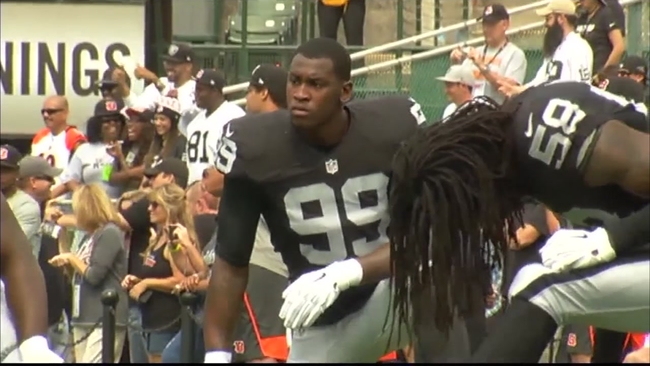