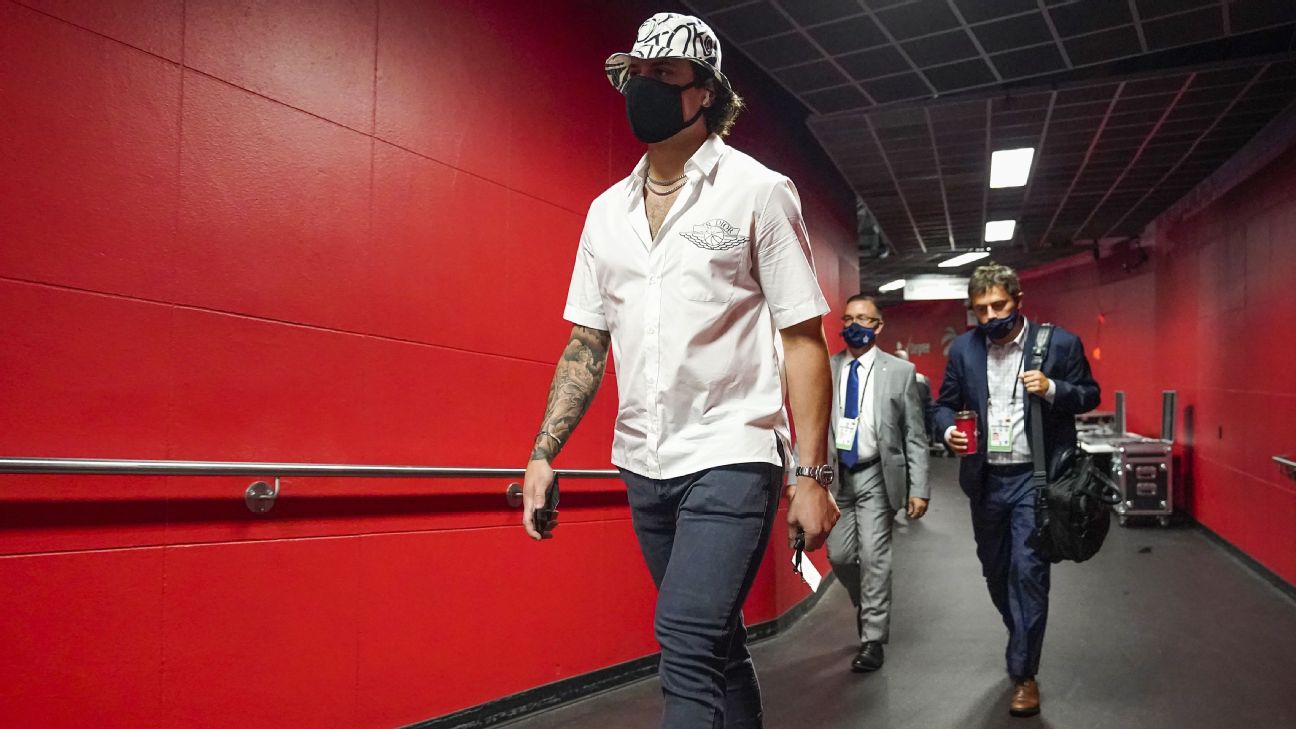 Under the NHL's CBA, players are required to wear a suit, dress shirt and tie to the arena on game days "unless otherwise specified by the head coach or manager." It's the only major professional sports league in North America with such a strict dress code.


It falls in line with hockey's long standing culture of conformity, and frankly, Versteeg is sick of it.

"I feel like we're leaving millions -- maybe hundreds of millions -- of dollars on the table with advertising and marketing opportunities," Versteeg said. "The way the NBA treats it -- every time they get out of their bus or cars, it's a free red carpet. Who are you wearing? What are you wearing? Who can you be sponsored by? Fashion and streetwear is so in, especially over the last three years as NBA players have popularized it. I wish the NHL would get on board. It might be a bit of a psychological change for the fans too because they're so used to seeing players dress a certain way, but I think they need to see these players and their own personalities come out. So not only can guys get sponsorship deals out of it, but they'll be more personable to fans. Because there's no better way to show your personality with what you wear."

For 2020's unusual Stanley Cup tournament, the NHL and NHLPA agreed to relax the rules and let players wear whatever they want to the rink. Versteeg was excited, but hesitant to gettoo excited, knowing hockey culture. "I thought some teams -- very few -- would let their players do it. I figured most teams would handcuff them, which they are doing. They're making them wear team-issued polos and dress pants. That is, to me, so near-sighted, and it's not looking at the bigger picture of where these players can go and take the game."

But, there have been a handful of teams -- and players -- who have leaned in. Versteeg has been providing Joan Rivers-esque commentary on his Instagram feed (@stigalicious), so ESPN asked if he would share some of his best and worst looks of the tournament's first week.

Matthews is also taking initiative to promote his own looks on social media, which Versteeg also appreciates. (As an aside, Versteeg believes every team should have a photographer take photos of players entering the arenas. Players should get a copy after every game to post to their liking. After all, all teams were required to bring a social media coordinator inside the bubble).

"Justin Bieber posted about Auston Matthews [earlier this season], Auston is wearing [Bieber's] Drew clothing line," Versteeg said. "And that not only helps with Auston's name recognition -- the guy has 140 million followers -- but it brings more fans to the sport. I don't think fans will leave the sport because players are wearing certain things."

Teammates lift each other up 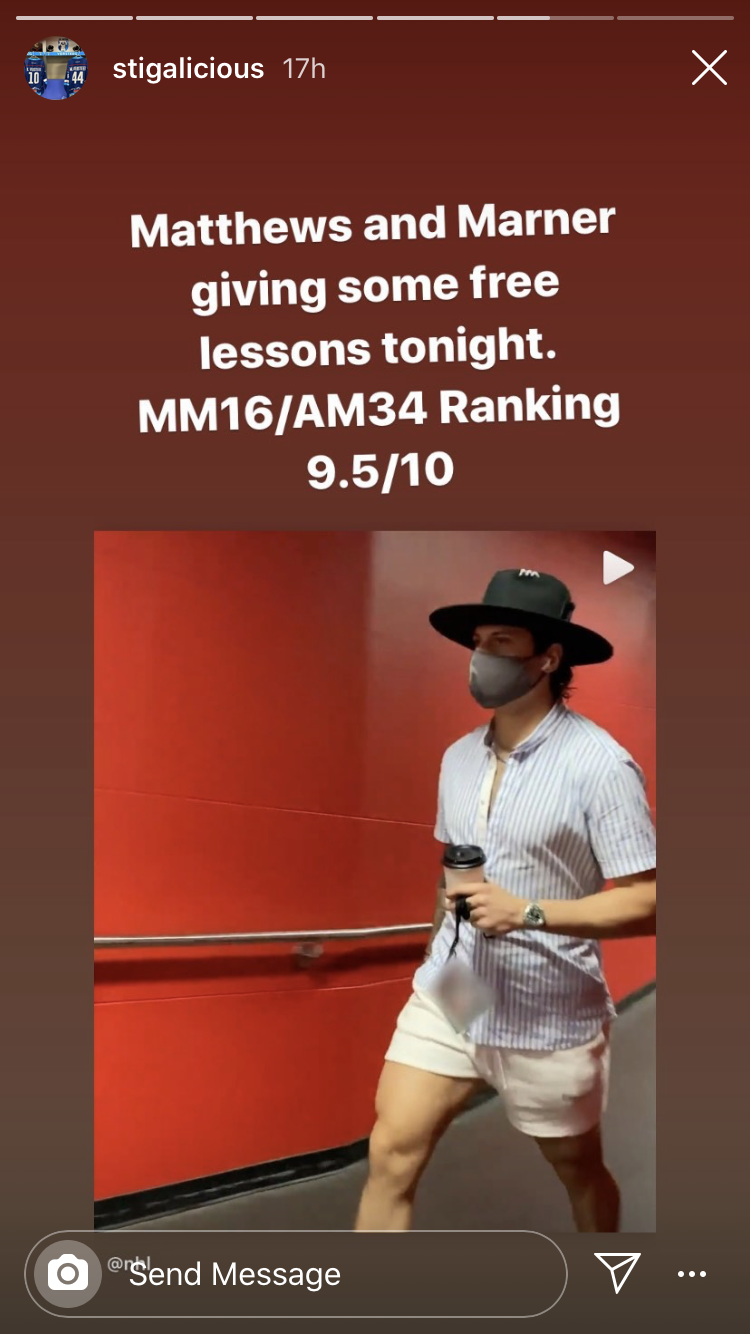 It's not just Matthews that stands out in Toronto. "Mitch Marner comes in with his patent hat, and his nice shoes and nice jeans and all that," Versteeg. "Willy Nylander seems to be into the sweatpant, high-top or off-white type shoe look. Those are nice too. I like that they're willing to try new things. It doesn't have to be a certain look or a certain thing, but I've liked all those guys so far."

Versteeg won two Stanley Cups with the Blackhawks, so he's familiar with the locker room culture. It's unclear what Chicago's official dress policy is, but the fact that captain Jonathan Toews wore a suit to the first game sets the example. Versteeg surmises that's why the rest of the team arrived at the rink with tucked in polos (As Versteeg mused on Instagram: "Dylan Strome making sure that LinkedIn photo looks fresh.") 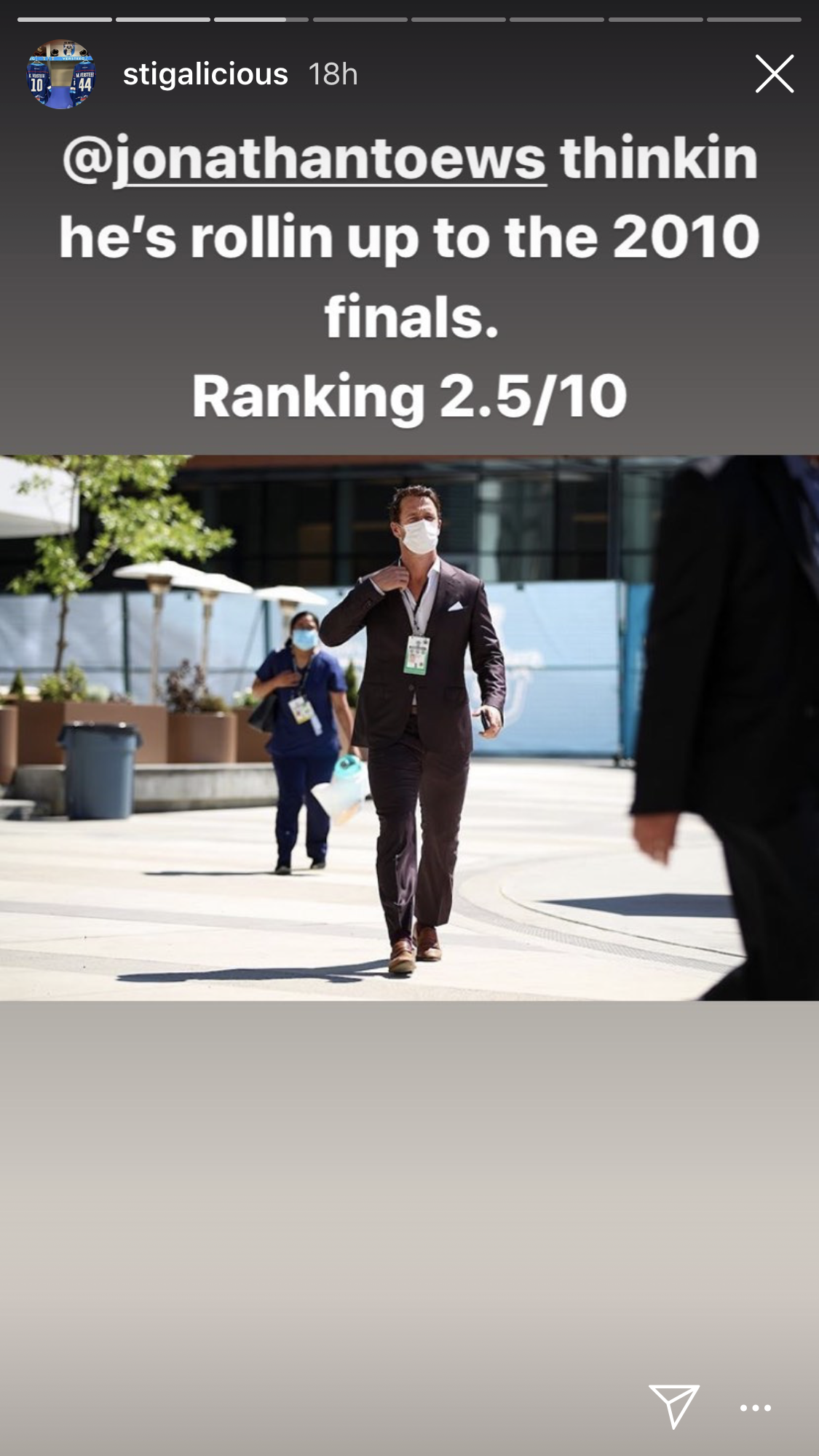 "Suits are kind of Tazer's thing," Versteeg said. "Besides me trashing him -- which I'm about to do, because he's my buddy -- suits are his thing. He's a professional guy, that's the way he likes to look and carry himself. I really like how he looks, but that doesn't mean the young guys can't dress the way they want, too. I know [Adam Boqvist], and I know how he dresses, and I know the way [Alex] Nylander dresses, he's a lot like his brother, so I would have loved to see those young guys do that because it would captivate a young audience -- Chicago has such a young fan base -- and bring these guys into a whole different stratosphere."

It doesn't have to be too casual...

For the Avalanche's first game, Versteeg took notice of Nikita Zadorov, who entered Rogers Place Arena with slicked back hair and swagger:

"He came in this nice white suit, with some loafers on," Versteeg said. "And that's his style, so I like that, too. Because the Avalanche are one of the teams allowed to wear what they want, he put his stamp on it. He looks great."

... but the full-team looks need to go

The Penguins have arrived up to games in suits, with no ties. "They look like they're going to Miami or something," Versteeg said. But like Chicago, the team is just following their leader.


"It's Sid's team, right?" Versteeg said. "I don't know what they talk about or what they want, but I would love to see what Sid would wear on a regular day or a regular game. I'd love to see what Geno wears too. I mean the guy's got a million followers. I've seen him dress up, and Geno dresses awesome. To do it for a game would put it on a different pedestal."

The worst-dressed qualification series by far is the Minnesota Wild and Vancouver Canucks. The Wild said early on that their team leaders decided everyone would wear team-issued polos to the rink. The Canucks, while sporting some fun off-day looks (see: Elias Pettersson's bucket hats) have also showed up in polo tees. 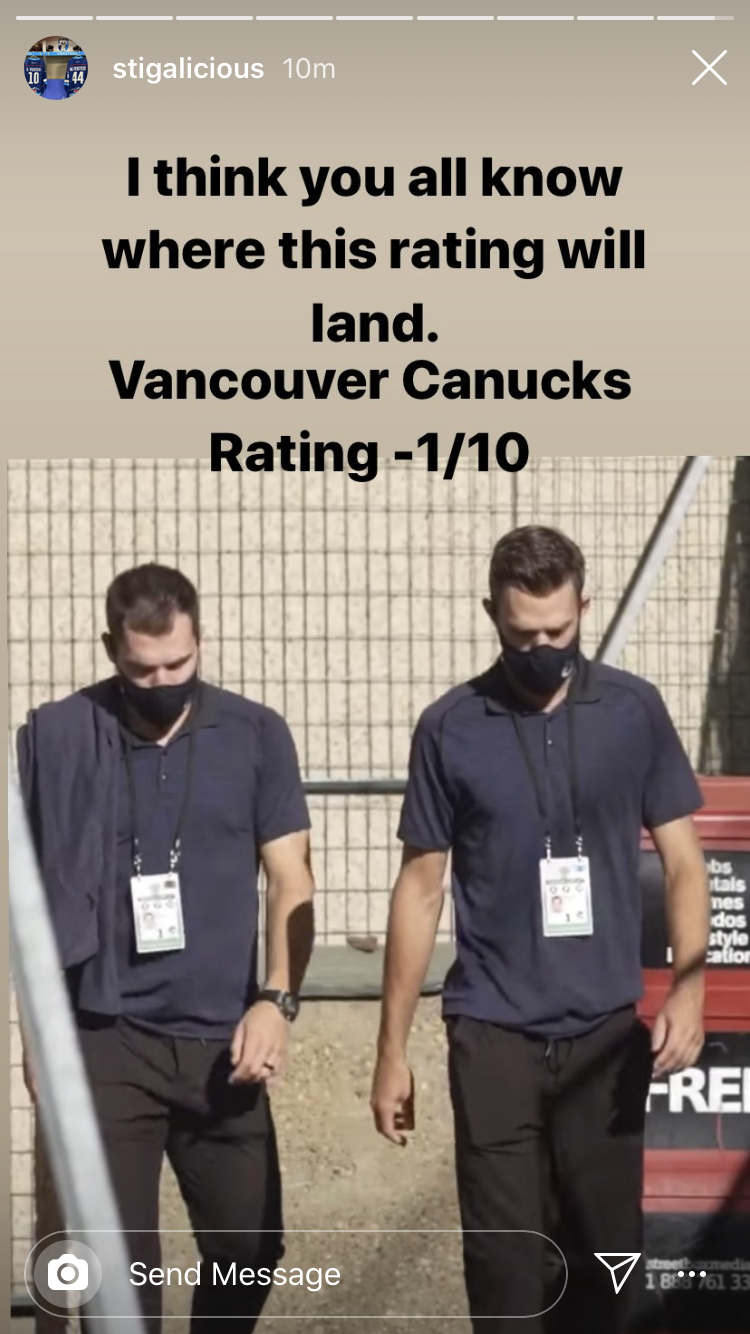 "They're a team, I understand that," Versteeg said. "But at the end of the day, I feel like it's taking away from some of their play too. If I'm Minnesota, or if I'm Vancouver, and I see these other teams coming to the game dressing up and feeling good, and I'm coming in a team-issued polo, there's no extra little swagger you can bring to the game. If you come to the arena wearing nice pants, or nice shoes or even a cool T-shirt -- like, it doesn't have to be fancy -- you feel good and confident and swagger, it ups your game on the ice, too." 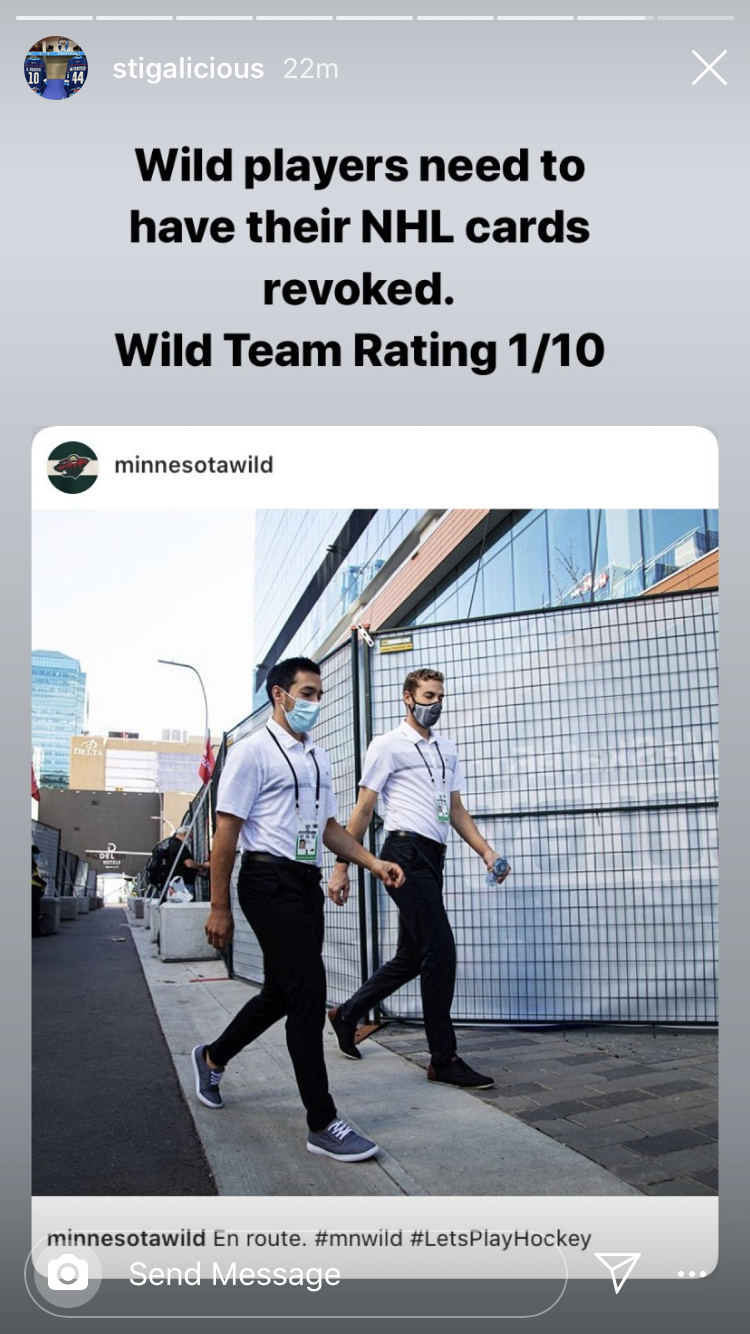 Nice effort, but missing the point

The Arizona Coyotes also dressed as a team, but they ordered customized Lululemon sets for each of the players.

"They have these sweats, with those sweat track pants or whatever," Versteeg said. "What is that? Like what even is that? They look like they are an AHL hockey team. It literally looks like they are a minor league team wearing this stuff. And it's fine, but to come to an NHL game wearing that, it's just killing these guys' brands. And it's in Arizona, which could use a fan base, and use other things to draw people in. This is not the way to do it." 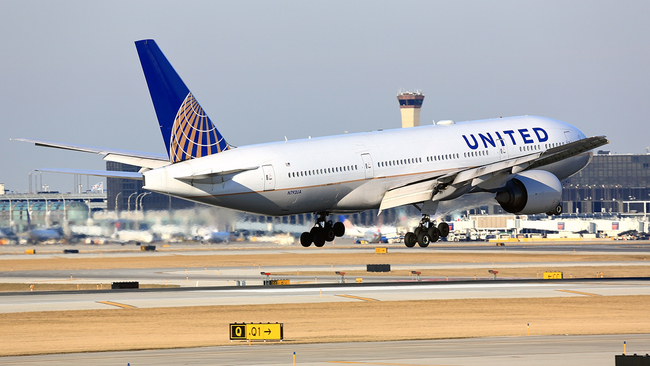