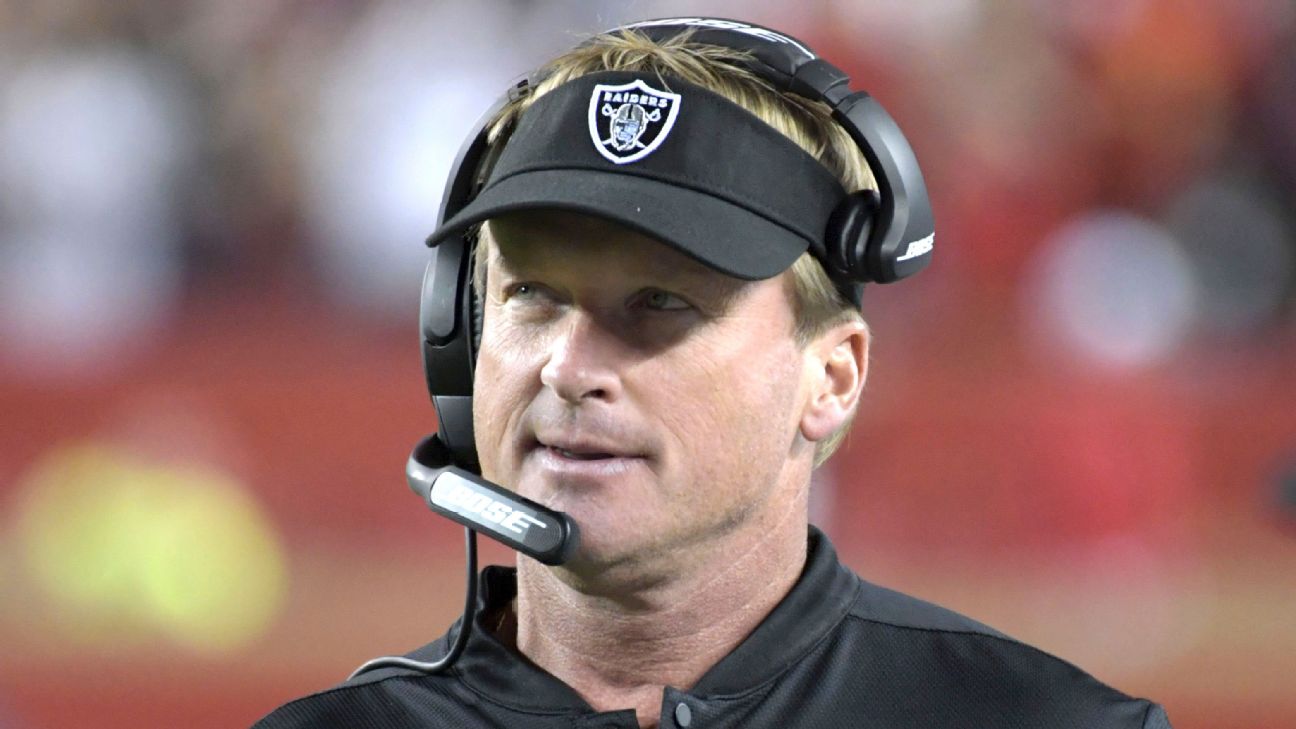 SANTA CLARA, Calif. -- Jon Gruden stood by his claim that players are "dying" to play for the Oakland Raiders in 2019, adding that he doesn't believe his current players took it as a message that they are not good enough.

"I'm just trying to get people excited about the Oakland Raiders," Gruden said after his team was thumped 34-3 by the San Francisco 49ersin the final Battle of the Bay on Thursday night at Levi's Stadium. The Raiders move to Las Vegas in 2020.

"The Oakland Raiders is a great organization. I know it's not looking pretty right now. I've heard a lot of negativity over the last six or seven months, and rightfully so. But we're going to build a championship football team here. I know a lot of people as players, as fans, just in general, want to be a part of this."

The Raiders fell to 1-7 at the season's midway point and have an inside track to a top 2 pick in April's NFL draft. Oakland also has two other first-round picks, from the Chicago Bears and Dallas Cowboys, after trading edge rusher Khalil Mack and receiver Amari Cooper.

In an interview with Fox Sports this week, Gruden told Raiders Hall of Famer Howie Long that players around the league have expressed their desire to play for him in 2019.

Raiders veteran defensive end Frostee Rucker, a 12-year veteran who is in his first season with Oakland, said he believed others would want to come to Oakland, despite the poor record and plummeting play.

"Absolutely, I'm sure," Rucker said. "You get a chance to play for this storied franchise? That's why I came -- it's Coach Gruden. I came here for [defensive coordinator] Paul Guenther. I came to put that skull on my helmet, and I'm still fighting, every day. I still love to be a Raider."

And while Rucker said he had not seen the Gruden interview with Long, he did acknowledge, "Maybe some of the noise from the outside has gotten in, you know? Maybe. Maybe. Maybe all this writing, all this stuff on social media has taken its toll on some guys listening to it.

Raiders quarterback Derek Carr said he was curious about the roster going forward.

"Because those are the kind of men you want on the team when it starts going well. Those are the kind of guys that when coach isn't around or one of our leaders, everyone in the locker room, the conversations they're having, they're only building us forward. Because the ones that pull you away, you don't want any of those guys."

Gruden, meanwhile, said he is approached by players after "every game" who want to play for Oakland.

"That's been the case my whole life," he said. "I think the brand of the Raiders is an exciting one. I think a lot of players, no doubt, do want to play for us in the future."