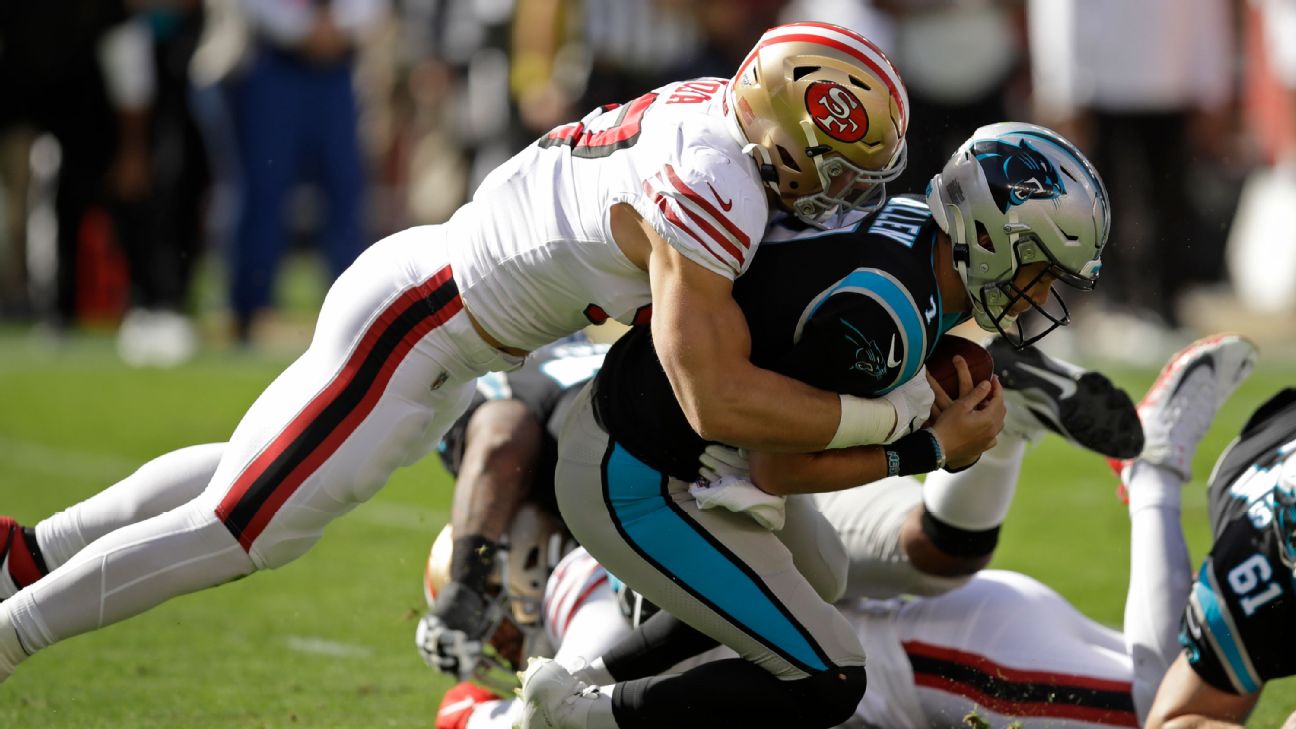 After eight weeks of the 2019 season, the NFL's top rookies are a collection of those with massive expectations, some slight surprises and more than a little nod toward defense.

We asked six ESPN writers and analysts to once again rank the top 10 rookies to this point. We tabulated the results, using Heisman-esque scaling for each ranking.

Then we identified two first-years who have seen their stock rise over the past month, and two more who have declined in stock. ESPN Stats & Information's Seth Walder also stopped by to name an under-the-radar rookie to keep an eye on -- his final pick from early October nearly made the top 10 this time around.

Let's dive into the second edition of 2019 rookie rankings, starting with a guy many considered the top player on the draft board last April.

In the four games since the 49ers returned from a Week 4 bye, Bosa has six sacks, a highlight-worthy interception and nine tackles for loss. He has been dominant off the edge for the Niners in their run to 7-0.

Jacobs has averaged at least 4.4 yards per carry in each of the past four games, with two 100-yard games in that span. And he is the only rookie among the league's top 20 in rushing, showing why he was the first running back off the board in April.

Composed in the pocket and opportunistic with the ball, Minshew has impressed in Jacksonville. Defensive coordinators who have faced him say his ability to work to all parts of the field is ahead of his résumé. He has thrown just one interception in his seven starts (the other came in relief of Nick Foles in Week 1).

The Cardinals have done fairly well to limit Murray's difficulties in finding throwing lanes, and Murray has shown quality accuracy when the Arizona offense gives him some room to work. But he is taking some punishment, having been sacked 26 times, tied for third most in league.

Since he missed Week 4 with a hamstring injury, the Redskins' struggles overall on offense have muted his impact at times (just 50 yards combined over the past two weeks). But McLaurin's potential is consistently on display, evidenced by three 70-plus-yard days.

Allen has played with more coverage responsibilities than he did in college at Kentucky but still shows the speed to the edge when he's pointed at the quarterback that made him a top-10 prospect. He has eight QB hits and five sacks in the past four games. One more sack ties the Jags' rookie record.

Burns had right wrist surgery during the Week 7 bye, so he played just 22 snaps against the 49ers this past weekend. But the guy makes an impact even when he gets hurt -- he suffered the injury when he blocked a punt earlier in the season.

Since playing 76% and 79% of the snaps in the first two games of the season, respectively, Bush has played at least 89% in each of the past five games and every defensive snap in three of those. He's also returned one of his league-leading four fumble recoveries for a TD.

Savage played 22 snaps against the Cowboys before injuring his left ankle in Week 5 and missed a Week 7 victory over the Raiders. But he played every snap in a win over Chiefs in Week 8 and tied his season high with six solo tackles.

McCoy has played all but six snaps on offense for the 7-1 Saints and has shown himself to be an ahead-of-his-time rookie in both run blocking and pass protection.

Elgton Jenkins, G, Green Bay Packers: Jenkins didn't play in the season opener, as the Packers went with Lane Taylor at left guard. But Jenkins played 18 snaps in Week 2 when Taylor suffered a biceps injury and has now played every play on offense in the past six games. Opposing offensive coaches have said the No. 44 overall pick gives the Packers some needed pop in the middle of the line in the running game.

Dexter Lawrence, DT, New York Giants: Lawrence has started every game for the Giants and played at least 63% of the snaps in each of the past five games. The 17th pick of the draft had a sack and blocked an extra point against the Buccaneers in Week 3 to go with five tackles and a sack against the Vikings in Week 5. Some looked at him as primarily an early-down run defender during the draft buildup, but he has consistently shown the ability to generate inside pressure in the pass rush.

DK Metcalf, WR, Seattle Seahawks: Metcalf had two of his four touchdown catches this past Sunday against the Falcons. Metcalf has shown he's already a difficult matchup physically for many opposing defensive backs, and as the No. 64 pick continues to show more comfort level in his route running, he'll have more days like Week 7 against Baltimore, when he was targeted a season-high nine times. He has totaled 402 yards and four touchdowns this season.

A guard's life can keep him under the veil of anonymity in the public domain at times, but Jenkins is easy to find on game film when the Packers get committed to the running game. He has consistently carved out rush lanes and works effectively to the second level.

Sure, Knox didn't have a catch in the Bills' loss to the Eagles, but it's difficult to look at the game tape and understand why the 96th pick of the draft isn't targeted more in the offense. The Bills' single-season best in yards per catch for a tight end with 30 or more receptions is 13.3 by Pete Metzelaars in 1988 -- and Knox is at 14.8 right now.

Brown had two 90-yard receiving games in the season's first four weeks, including two receptions of 50 or more yards, so he built some tidy expectations. But as the Titans' offense has struggled a little through the turmoil of a quarterback benching and switch, some opposing defensive coaches see just slightly more hesitation in the second-rounder's game, as though he is pressing a bit.

Williams was moved out of the starting lineup in the fourth quarter of the Jaguars' Week 5 loss to the Panthers. Then the No. 98 overall pick did not play at all on defense in Week 6, played 46 snaps in a Week 7 win over Cincinnati and then was a game-day inactive in Week 7 with a hamstring injury.

In a season in which the Giants have dealt with a depleted receiving corps, and despite playing in only six games and receiving 27 targets, Slayton has shown he belongs. Based on NFL Next Gen Stats factors such as distance of target, QB pressure and receiver separation, Slayton accrued 65 more completed air yards than we would have expected an average receiver to have racked up on those same passes (15th in the NFL). Not bad for a fifth-rounder. -- Walder 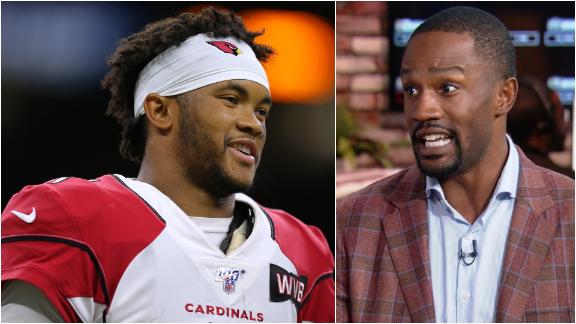 Foxworth still taking Murray over Bosa
Domonique Foxworth would still take Kyler Murray over Nick Bosa because having a quarterback is extremely important to a football team. 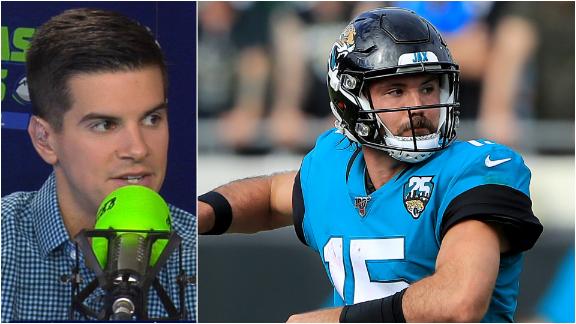 Yates, Berry advocate for Minshew in fantasy
Field Yates is confident in Gardner Minshew's fantasy value and says he should be rostered in more leagues. 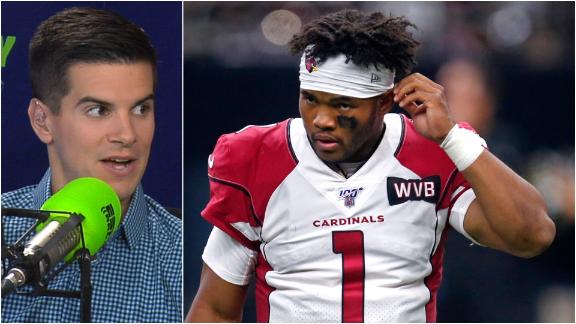