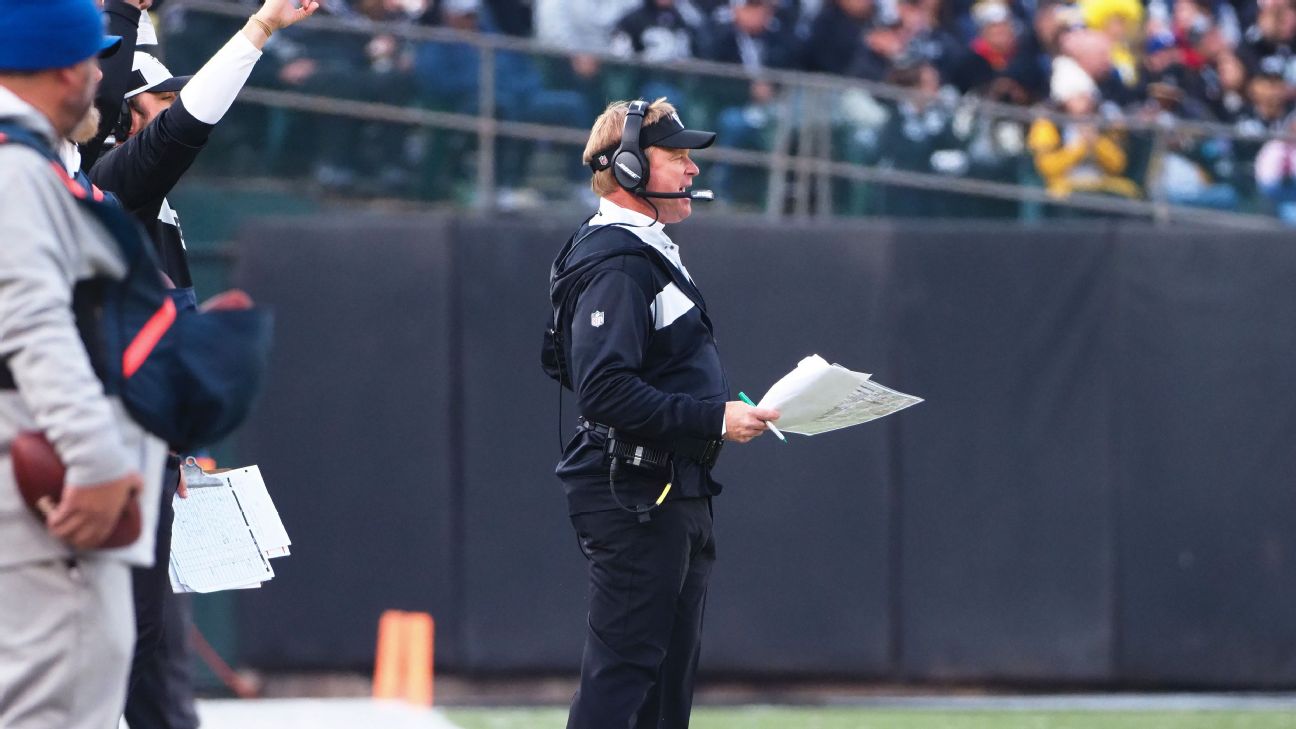 ALAMEDA, Calif. -- If nothing else, Jon Gruden is an old football soul who cut his coaching teeth in a different era. His first head-coaching job came at the tender age of 34 in 1998 with the Oakland Raiders so, yeah, Gruden is sensitive to the Raiders' current lot in his second stint with the franchise.

The Raiders' 2018 home finale, a Christmas Eve affair against the rival Denver Broncos, might be the final Raiders game ever played in Oakland after the city announced its plans last week to file a federal lawsuit against the team and league over the move to Las Vegas in 2020. A day later, the Raiders pulled their offer to pay $7.5 million in rent for one last season in 2019 at the Oakland Coliseum off the table.

"Just raging in the Black Hole," Gruden said Monday in his weekly media conference, when asked about Coliseum memories. "Rocking and raging down there after the Steeler game [last week], after a lot of wins over the years. Seeing a lot of the old highlights of great Raider teams, I get excited. I get emotional about it, and hopefully we get it all resolved so we can continue to play there."

"You're walking around before the Steeler game and you see Franco Harris and Lester Hayes and you think about some of the battles they had in that place. Reggie Jackson, lighting the [Al Davis] Torch. I mean, there are a lot of things that have happened in that stadium and, uh, next question. I don't want to start crying about a stadium."

True, the Coliseum, which opened in 1966 and remains the lone stadium in the NFL also used by a major league baseball team, the Oakland Athletics, has sewage issues. And rodent problems (a skunk met his fate on the concourse after the home opener and two dead mice were found in the press box soda machine after the Steelers game).

But on-the-field memories are what keep Gruden going. He recalled the famous Sea of Hands game from the 1974 playoffs in Oakland, when a falling-down Ken Stabler hit Clarence Davis in the end zone to beat the Miami Dolphins.

Gruden also talked of sitting in old Texas Stadium in its last season of 2008, as head coach of the Tampa Bay Buccaneers.

"I remember sitting in the locker room, looking around and thinking, 'Man, there were some real good coaches and players that played in here,'" Gruden said. "I like the old stadiums. I like the traditional joints, to be honest with you. But I'm also excited about the future of the Raiders. Who are we kidding? It's a sentimental time.