Raptors have a superstar ready to duel with best in Leonard 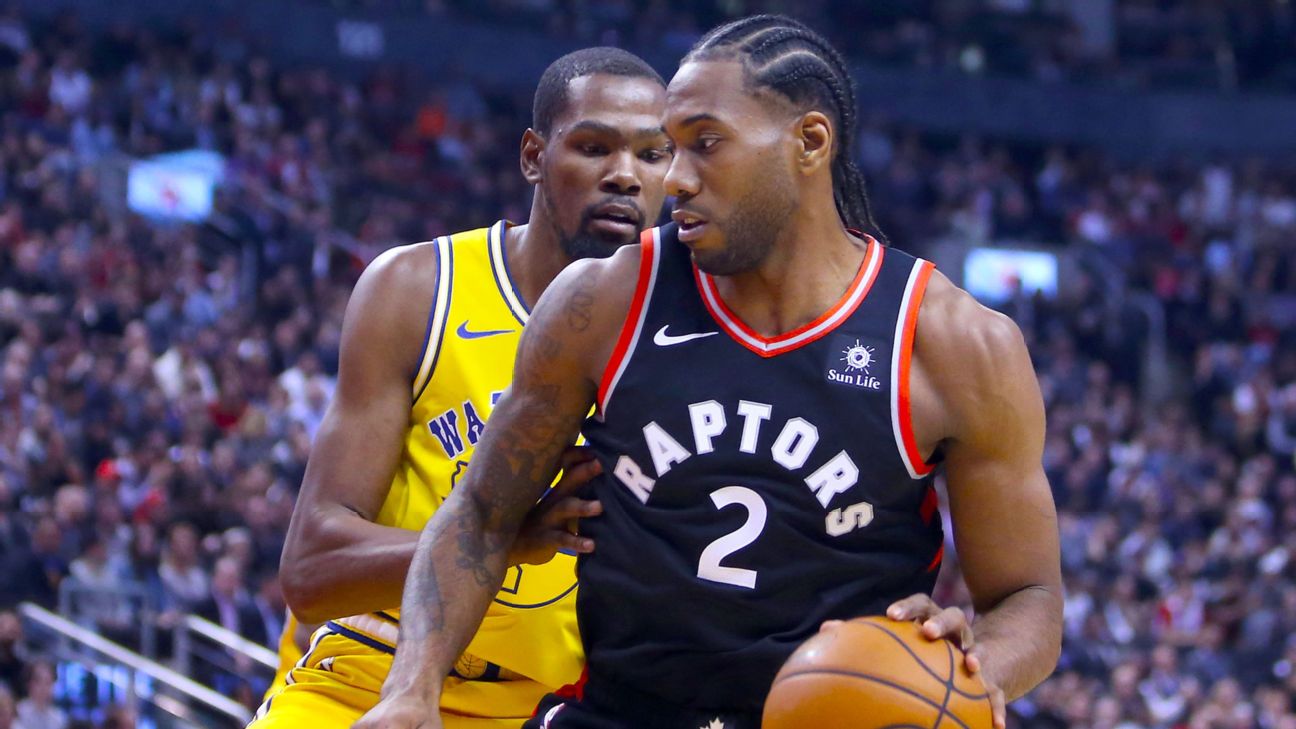 TORONTO -- The Toronto Raptors had seen this movie before.

When Kevin Durant hit a completely absurd turnaround fall-away 3-pointer in the corner to tie the game at 119 in the final seconds of regulation, he completely wiped away what had been an 18-point Raptors lead. In the moment, it seemed like the cap on another night of succumbing to pressure for a franchise that has become synonymous with falling apart when the lights are brightest.

But these are not the same, old Raptors. That team would've folded when Durant forced overtime. But that team didn't have Kawhi Leonard and Danny Green.

So yes, this was only November, and yes, the Raptors should not have put themselves in the position they wound up in, the result -- a 131-128 victory at Scotiabank Arena against a Golden State Warriors team that was admittedly without Stephen Curry and Draymond Green -- was a step in the direction this team needs to take if it wants to face the Warriors again in June.

"I think that when a team gets kind of dragged into overtime like that ... a lot of times, that team will feel sorry for themselves, and not come out and play," Raptors head coach Nick Nurse said. "We didn't [do that]. I was proud of them for that, to take the emotional punch there in the gut, and take a few deep breaths there at the end of the game and go back out there and play the overtime the way they did."

The win pushed the Raptors to an NBA-best 19-4 this season and improved their current winning streak to a season-best seven games. But it also exposed all of the flaws that have so many questioning whether Toronto -- despite its record -- truly is the favorite to get out of the East.

Kyle Lowry, one of the main culprits in those collapses of the past, didn't allow himself to shoot a wide-open 3-pointer with three minutes to go, and was a dismal 4-for-14 on the night. Toronto, in general, felt like a team that was struggling to breathe as it attempted to move to heights it hadn't reached before.

But this time, the Raptors had a pair of players, in Leonard and Green, who have been in every possible situation on a basketball court before. They've played in the crucible that is the NBA Finals -- and came out the other side with rings on their fingers.

In many ways, their former team, the San Antonio Spurs, is everything these Raptors haven't been. For two decades, San Antonio has been basketball's version of the New England Patriots -- a team that, no matter who is playing or what is happening, can be expected to find a way to win.

The Raptors have been a team longing for precisely that. And, Thursday night, they began to see what the benefits of injecting some of that Spurs culture into this franchise's veins can provide.

Leonard was, of course, sensational, putting up 37 points, 8 rebounds and 3 assists while going 14-for-24 from the floor. It was his best, most complete performance in a Raptor uniform, as he and Durant put on what arguably was the show of the season thus far.

But it was Green who hit the biggest shot of the game -- a 3-pointer with 2:07 remaining in overtime that put Toronto ahead for good. In the past, it would've been a struggle to find someone trustworthy enough in a Raptor uniform to shoot that kind of shot and expect it to go in.

For Green, though, it was just another shot, and just another game -- a mindset he's trying to instill in this Raptors team.

"It's just the maturity level, and just everybody not holding their heads and getting down when things aren't going our way," Green said. "You have to find a way to get out of that funk. Get out of that mood. Keep the positive energy and keep making winning plays.

"Those winning plays turn the energy of the game around ... even when you see [the lead is] bleeding, try to stop the bleeding with something."

Too often in the past, the Raptors have bled out. This, after all, is the city that has earned the derisive nickname "LeBronto" in recent years because of the utter domination LeBron James has had over this franchise, sending the Raptors to one humiliating playoff failure after another.

This past summer, Raptors president of basketball operations Masai Ujiri decided he'd had enough of that. He dismissed Dwane Casey, the winningest coach by a country mile in franchise history, and then traded away DeMar DeRozan, the greatest player in the franchise's history, to boot.

He decided it was time for the Raptors to have a different look and a different identity. And, even with James going West, it's easy to understand why.

Despite their early-season struggles, the Boston Celtics will be a formidable foe -- and have exactly the kind of playoff-tested closer in Kyrie Irving that the Raptors have never had before. The Milwaukee Bucks have Giannis Antetokounmpo with shooting around him -- not exactly an appetizing combination to try to rein in. The Philadelphia 76ers have a star-studded trio of Jimmy Butler, Ben Simmons and Joel Embiid that is the envy of just about any team that isn't the Warriors.

So no, surviving the Eastern Conference is not a guarantee now that James is gone -- not by a long shot.

But the Raptors have never had a talent like Leonard, a true dynamo at both ends of the court. And, throughout this run of the past several years -- easily the best stretch in franchise history -- they have never had a guy like Green to give this team the kind of veteran stability it needed to right itself when things started to go south.

But there was more than just the presence of Leonard and Green that helped the Raptors finish this game off.

While Lowry did not shoot the ball well overall and did fail to take a wide-open shot, he did hit a huge 3 late in regulation, had 12 assists and just one turnover, and his steal off of Andre Iguodala and dish to Pascal Siakam that led to free throws late in overtime helped seal the game for Toronto. The Raptors outscored the Warriors 26-16 off turnovers overall.

Siakam, meanwhile, continued his star turn with 26 points on 8-of-10 shooting from the field and 3-of-4 on 3-pointers, and Serge Ibaka started at center and had yet another strong game at center with 20 of his own. The Raptors are now 11-3 when Ibaka starts this season.

If the same Raptors of the past few years were together this time around, it's hard to see this game playing out the way it did. But it will take more than simply adding Leonard and Green to this mix to change the feeling that seeps into every pore of this franchise when the pressure builds around it. Changing that isn't something that can happen in November, no matter how big the game -- which is why Green, when a reporter attempted to ask him if that was possible, cut off the question with a smile before the reporter could even finish.

"No," he said. "We can definitely learn and get better from tonight's game when we watch the film.

"But it's not something where we can base this off any future psychological [success] ... it's too early."

The Raptors can't erase years of futility with one win in November, or one trade in July. But in adding Leonard and Green, the Raptors didn't just add one of the game's greatest talents and a sound veteran wing defender and shooter, respectively.

They added two players that, no matter the situation, will never be afraid of the moment. And if, over the next several months, they can instill that feeling in their teammates, the Raptors just might be hosting these Warriors again come June.

Kawhi puts up 37 as Raptors withstand Warriors in OT
Kawhi Leonard is on point all night, scoring 37 points as the Raptors prevail in OT to beat the Warriors.

Durant forces OT with two contested 3s
Kevin Durant knocks down a 3-pointer in Kyle Lowry's face, then fades away from the corner to tie the game at 119-119 with 8 seconds left.

Green hits deep 3 in OT for Raptors
Danny Green drops a big-time 3-pointer as the Raptors grab the lead in overtime over the Warriors.

Kawhi says the crowd's energy 'only makes you better'
Kawhi Leonard is proud of the Raptors for "executing down the stretch" and talks about what it's like to face Kevin Durant.