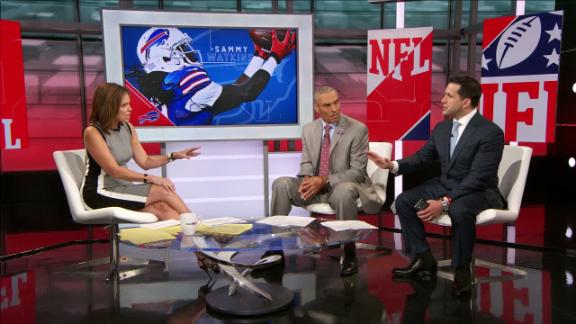 Watkins told the team's medical staff after Sunday's loss to the Baltimore Ravens that his surgically repaired foot was sore, prompting a report Monday from the New York Daily News that Watkins could be "shut down for several weeks" as a precaution.

"That's not what we're thinking right now," Ryan said of the possibility of sidelining Watkins for the Bills' upcoming games.

"Definitely going to be out there playing [against the Jets]," Watkins told ESPN.

"I'm doing fine. I'll be fine. Just was sore after the game. That's expected. Getting prepared for next week."

Ryan added that he is "confident that [Watkins] will be OK" despite the apparent setback in Watkins' recovery from a broken foot that required a procedure to repair in the spring.

"Hopefully he'll progress through the week and he'll be ready to roll," Ryan said Monday of the Bills' game Thursday against the Jets. The team will only hold walk-through practices before the contest, which will give little indication of Watkins' availability to play.

"I'm not in any pain," Watkins said. "It's not about the pain. It's about just being smart. I got it checked out and it was fine."

The Daily News reported Monday that doctors have advised Watkins against having a second surgery on his foot, and that "there was a fear on Sunday night that the wideout could miss the rest of the season" before doctors made the recommendation not to have surgery.

Asked Monday if the possibility of Watkins missing the entire season was "overboard," Ryan responded, "it seems like it."

When asked if there was concern the injury could get worse, Watkins said, "With these injuries, they get better as you go. The more reps, the more speed, the more you're feeling the injury out and mentally having faith and believing that it's healed, you get better. I've been progressing and getting better every day, so I don't feel like I'm having any setbacks.

"It's just all up to we being smart, treatment and doing the right thing."

Watkins, who was not listed on the injury report last week, played 42 snaps Sunday, catching four passes for a team-high 43 yards. He declined to speak to reporters after the game.

The Daily News reported that X-rays after the game did not show any broken bones in Watkins' foot and that doctors consider his availability in upcoming games to be a pain-management issue. Watkins, the fourth overall pick in 2014, has battled numerous injuries during his career. After missing offseason activities last year because of hip surgery, Watkins missed three regular-season games because of a calf injury and an ankle injury.