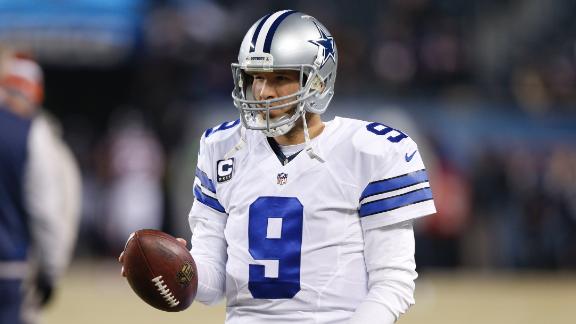 IRVING, Texas -- The NFL is investigating why Tony Romo has not been on the Dallas Cowboys' injury report with a rib injury the quarterback claimed he has played with for nearly two months, league spokesman Brian McCarthy confirmed to ESPN.

Romo said after Thursday night's 41-28 win against the Chicago Bears that he was playing with a broken rib. However, multiple sources say Romo misspoke and that he had torn rib cartilage, not a break.

The quarterback said he was unsure when he suffered the rib injury, but a source said it came when he took a big hit from Seattle Seahawks linebacker Bobby Wagner in the first series of the Cowboys' 30-23 win Oct. 12. Romo did not miss a snap in that game.

According to the NFL's injury report policy, "All players with significant or noteworthy injuries must be listed on the report, even if the player takes all the reps in practice, and even if the team is certain that he will play in the upcoming game."

A team is subject to a fine if the league finds it did not comply with its injury report rules. In 2009, the New York Jets were assessed $125,000 in fines for failing to put quarterback Brett Favre on the injury report after he revealed he played the final month of the 2008 season with a torn biceps tendon.

Romo has been listed on the injury report all season because of his back.

Romo has had this kind of rib injury before, suffering it in the 2008 season finale against the Philadelphia Eagles. He played through a broken rib and punctured lung suffered in a Week 2 win against the San Francisco 49ers in 2011.

Romo's health has been a talking point the entire season. He had back surgery last December to repair a herniated disk and missed the final game of the season. He was limited throughout the offseason and in training camp. After the second game of the regular season, he altered his practice schedule, sitting out of Wednesdays in full weeks of preparation to build his core strength and rehab.

On Oct. 27, against the Washington Redskins, he suffered two transverse process fractures that kept him out of one game, a Nov. 2 loss to the Arizona Cardinals.

He said after the win over the Bears that the fractures are all but healed and also said the ribs were feeling a lot better, too.

"It'll be nice when it's just about the back [surgery] instead of all the other junk," Romo said.

Romo wears extra protection for his ribs and has a longer-than-normal plate to protect his surgically repaired back. He has 10 days to prepare for the Cowboys' next game, which is Dec. 14 at Lincoln Financial Field against the Eagles.