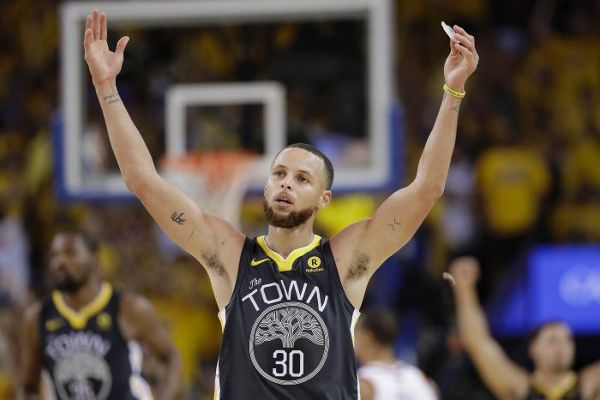 WALNUT CREEK, Calif. -- Stephen Curry can only imagine the intensity level of the Lakers-Warriors rivalry now that LeBron James has landed in L.A.

After four straight NBA Finals against James and the Cleveland Cavaliers, two-time defending champion Golden State will get four matchups against James during the regular season.

"And a whole new-look Laker team with some of the young kids. It should be fun, the Bay Area and L.A. and the whole thing," Curry said Monday in a sit-down with The Associated Press while hosting his annual elite camp at Ultimate Fieldhouse. "When I first got into the league, Oracle would be buzzing any time the Lakers came in. There probably will be a revolution of Laker fans that are going to try to creep in, but I hope Bay Area and Dub Nation, we keep control of that competition, because we're on top right now."

The schedule is set to be released later this week.

Curry is eager to have new teammate and dominant big man DeMarcus Cousins healthy and recovered from surgery on a torn left Achilles tendon, which will give Golden State five All-Star starters on the floor together. Cousins has never been to the playoffs and can now chase a championship alongside fellow All-Stars Curry, Kevin Durant, Draymond Green and Klay Thompson.

"It's interesting because nobody going into free agency thought about DeMarcus as an option then all of a sudden he found his way onto our team," Curry said before getting in an on-court workout of his own. "So for us to have a new dynamic, a new look, whenever he's fully healthy it should be amazing. I think we got better. Obviously we lost some pieces that were very vital to us winning a championship, but you've got to evolve, you've got to find different things to focus on as you're trying to repeat, so it should be exciting."

After winning a second straight NBA title and third in four years, it's another whirlwind summer for two-time MVP Curry, whose season was interrupted several times by injuries. He has a newborn son, Canon, and is hosting his Under Armour "Stephen Curry Select Camp" this week for top high school players -- including two girls for the first time, one being his father Dell's goddaughter, Cameron Brink, from Beaverton, Oregon.

Later this week he will again play in the Web.com tour's Ellie Mae Classic at TPC Stonebrae in Hawyard. He has an indoor putting green at home as well as a swing simulator that has helped him leading up to the event given he also is busy with three young children at home.

"Am I getting any sleep? I'm getting the right amount of sleep for having a month-old son, my wife as well," Curry said. "There aren't really many expectations when a new baby comes, but my golf game is in decent shape. I haven't played as much as I'd like to leading up to the tournament. I have a full swing golf simulator in my house now that's helping me prepare. Actually I'm getting in trouble because at home I sneak into that room way more than I should just because it's right there and I get my little swings in. I would say my preparation level is adequate enough to play well and hopefully play better than I did last year."
Report a correction or typo
Related topics:
sportsespngolden state warriorsstephen curryrivalrylebron james
Copyright © 2022 ESPN Internet Ventures. All rights reserved.
TOP STORIES
Bay Area native killed after man pushes her in front of NY train
Customers wait 7+ days to get COVID test results from local company
A look back at Dr. King's visits, impact in the Bay Area
Fight for equal access to vote continues on MLK Day
Candle test helps show when face masks aren't doing their job
Pleasant Hill seek help finding missing 15-year-old boy
VIDEO: Drivers spin donuts on Oakland freeway during sideshow
Show More
Could CA see more tsunami threats from submarine volcanoes?
Woman killed after being pushed in front of NYC subway train
Student sickout may force school closures in Oakland
Here's why teens 12-17 have the highest COVID rate in SF
COVID-19 updates: US still waiting for omicron peak
More TOP STORIES News