The Golden State Warriors need Draymond Green: 'He's the control center of everything we do' 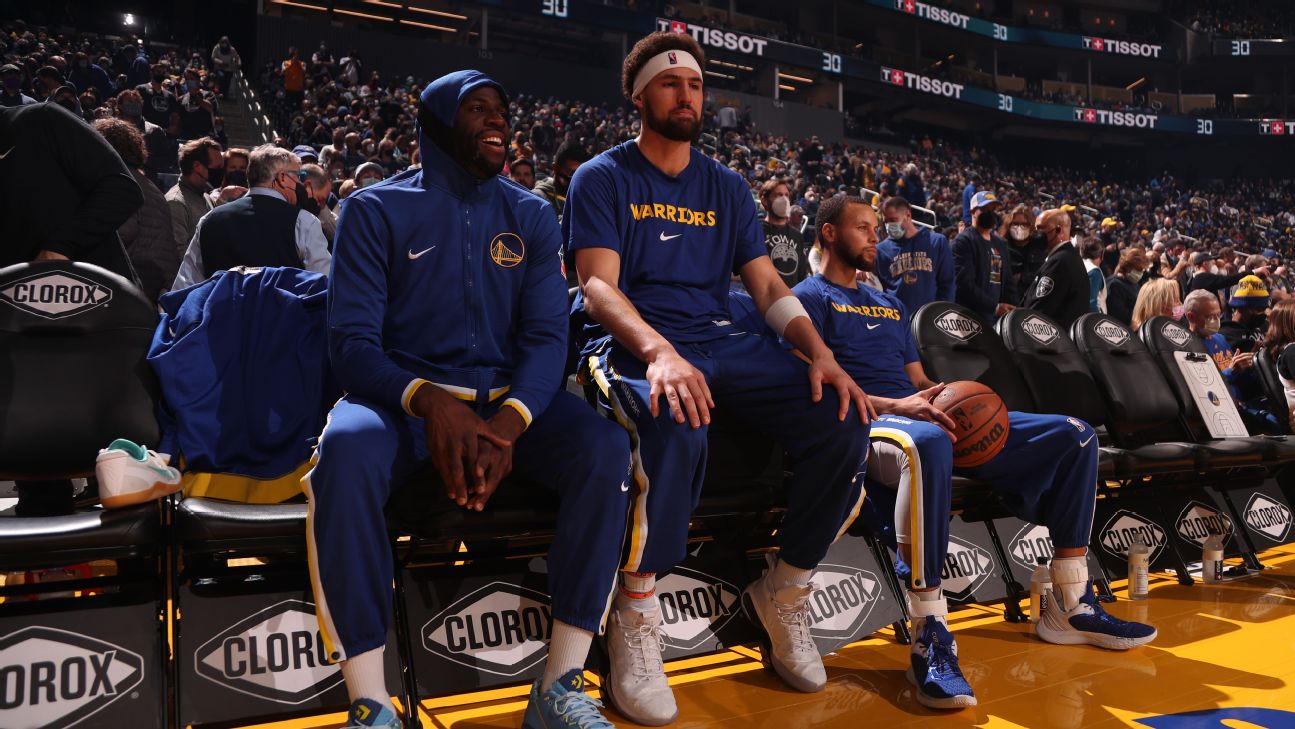 "DUB NATION, are you ready?"

The crowd roared its affirmation as the lights dimmed to announce the Golden State Warriors' starting five.

The finale was saved for the shooting guard who had waited 941 days to hear his name called again. Klay Thompson was finally back, and the Warriors were complete again.

For all of seven seconds.

Shortly after the ball was tipped, Green fouled the Cleveland Cavaliers'Darius Garland and instantly headed to the bench. Green had experienced some pregame calf soreness but wanted to be introduced in the starting lineup to honor Thompson's return.

He has not played since.

Green and the team said at the time that the move was just precautionary. Two months later, there is still no timetable for his return.

The Warriors -- who were half a game behind the first-place Phoenix Suns on Jan. 9 -- have lost seven of their past nine games to fall to 7 games back and just half a game ahead of the third-place Memphis Grizzlies.

In those 25 games without Green, the Warriors' league-best start has given way to glaring weaknesses on both ends of the court as they struggle to find consistency, desperately searching for the chemistry they were sure was going to be there once Thompson stepped back out on the court.

The Warriors started the season looking like legitimate title contenders for the first time since the 2017-18 season. Now, with 19 games left of the regular season, those title hopes seem contingent upon Green's return.

When asked if Green is the key to the Warriors' success, coach Steve Kerr's answer was simple.

"Yes," Kerr told ESPN. "There is only one Draymond."

WHEN GREEN HOBBLED back to the bench during Thompson's debut, the Warriors essentially lost their starting point guard. Prior to his injury, Green was second on the team in touches (73.6) and first in assists (7.4).

Green is one of only five current Warriors Thompson had played with ahead of his return this season, and he especially missed Green's playmaking as he reintegrated into the lineup. Green and Thompson have connected on 669 shots, second only to the Curry-Thompson connection.

"We're all built in terms of trust and chemistry, and to have a guy like [Green] who is very vocal, high IQ, has a certain approach to leadership, all that stuff matters," Curry said.

Green has assisted Curry on 816 shots in Curry's career, 65 of those this season.

Both Curry and Thompson have career-low 3-point shooting percentages this season without his presence in the lineup. And Curry shot just 32.9% from 3 in January.


On top of missing Green, Thompson also had to deal with a minutes restriction when he returned, initially being limited to 20 minutes per game.

"For [Thompson] he was forcing a lot of stuff early to get his rhythm back, knowing he had a short amount of time to do it," Curry said.

Third-year guard Jordan Poole, who started at shooting guard in Thompson's absence, has had possibly the biggest adjustment over the past two months. Poole has moved to the bench, though he still starts when Thompson is out of the lineup.

But the adjustments for Poole don't stop at starting versus coming off the bench. There was some concern during Poole's multiple transition periods over how he would handle the changes, sources told ESPN.

"The change is not him playing off the bench, it's that Draymond isn't out there," Kerr said. "Think about the first half of the season. ... He was not really our backup point guard. He played with guys who handled the ball. He really focused on scoring and shooting. But with the injuries we've had, Jordan has had to take on playmaking duties and there's a much bigger responsibility. He's not able to just focus on getting his points. He's got to actually run the team. So I think it's more so the injuries that have an impact on him."

Green led the team in passes made with 60.6 per game. Curry (49.1) and Poole (39.2) were second and third prior to Jan. 9, respectively. Since then, Poole is averaging only 41.5 per game, despite being tasked with running the offense when Curry is not on the floor.

And while he has been asked to carry an increased load in playmaking, Poole's 3-point shooting has suffered. He shot just 25.9% in February, down from 37% in January.

Wiggins, who earned his first All-Star appearance this season, has also seen a significant drop in his scoring without Green on the floor. Before Green's injury, Wiggins was averaging 18.8 points per game on 48% shooting.

In February, however, Wiggins posted his lowest average points per game (13.8) since November of his rookie season. He shot just 41.9% from the floor, and 36.5% from three.

As the Warriors adjust to their new roles with Thompson back in the lineup, the learning curve has been heightened by Green's absence.

"Understand that, especially without Draymond for this extended stretch, our offense is a little different," Curry said. "There is a lot more responsibility in terms of playmaking, being on the ball and handling that attention."

GREEN IS THE CENTERPIECE of the Warriors' defense, a cornerstone of the teams that played in five straight Finals from 2015 to 2019.

As one Warriors staff member told ESPN: "He's the control center of everything we do."

The Warriors have had the No. 1 defense in the league for the majority of the season. And while they hold that spot right now -- their defensive rating (105.3) edges the Boston Celtics (105.4) and Suns (105.6) by a fraction -- Kerr says it's an inflated statistic.

With Green on the court, the Warriors gave up an average of 100.3 points per game. In the nearly two months without the 2017 Defensive Player of the Year, Golden State's defensive rating has dropped to 110.0, eleventh in the league. And on Tuesday, the Warriors gave up a season-high 129 points in a loss to the Minnesota Timberwolves.


"When Draymond is out there, it just makes everyone's job easier," Andre Iguodala said. "Draymond, he's all over the floor. Defensively guarding 1 through 5, getting charges, blocking shots, every steal, everything."

There isn't just one issue on defense the Warriors can point to in order to explain their slippage on that end of the court. According to Kerr, it's different each night -- one night it's back cuts, the next transition points, the next boxouts. Through the first two weeks of February, the Warriors were 23rd in points allowed in the paint, but before that, they were No. 4.

Both Kerr and Curry say that is partly due to a lack of communication, which is usually led by Green. But Curry also said there's a lack of physicality, which will be hard to completely overcome until the Warriors get more size.

Without Green and James Wiseman -- who hasn't played since April 2021 due to a right meniscus tear -- the Warriors are left with just one center in Looney. Nemanja Bjelica can play small-ball center, but missed several games with back spasms and hasn't been consistent in the rotation since returning.

Kerr and the coaching staff have been trying to piece their rotation together since Green's last game, but haven't seemed to find the winning combination.

First, they inserted Otto Porter Jr. into Green's starting spot. They gave rookie and No. 7 overall pick Jonathan Kuminga a chance to start, and he displayed the kind of physicality the Warriors were greatly missing, taking a career-high 12 free throws against the Portland Trail Blazers on Feb. 24.

In the Warriors' final game before the All-Star break, Kerr chose to start Gary Payton II, who got the team's 15th roster spot because of his ability to lock players down. Payton finished the game against the Denver Nuggets with six steals and a blocked shot off Jokic.

Kerr says Payton -- who has been Green's primary replacement since the All-Star break -- will have a prominent role when the playoffs start, while Kuminga will likely be part of the rotation.

"You lean on the other pieces to keep the boat afloat, but we're not going to be anything great with how we're built," Curry said. "[Green] is obviously a big part of that."

Despite their lack of size, the Warriors opted not to make any moves at the trade deadline. They don't believe they will find the answer on the buyout market, either. General manager Bob Myers said that the trio of a healthy Green, Looney and Wiseman would help the Warriors more than anyone available via trade.

As it stands, the Warriors have just one of those three available, though Wiseman could be ready to return soon. The 20-year-old center, who is listed as day-to-day, traveled with the team on its current road trip and participated in 3-on-3 scrimmages Monday.

Still, one Warriors coach told ESPN that it's highly unlikely that Wiseman will be a big part of the Warriors' rotation, particularly in the playoffs. They want to plug him into specific situations but don't believe he'll be ready to take on the brunt of the work down low right away. Instead, they want him to get ready to be an integral part of the team next season.

Green, meanwhile, participated in his first team practice since early January on Saturday, partaking in shooting drills and 5-on-0 conditioning. And on Wednesday, he joined the team in Dallas and participated in 3-on-3 scrimmages with Wiseman and Thompson. But with 19 games left in the regular season, and the Grizzlies closing in on the No. 2 seed, Green still does not have a clear timetable for his return. And the Warriors still do not have an obvious replacement.

The Warriors have figured out how to win all season long while missing one or more key pieces. And while both Green and the Warriors are optimistic he'll return ahead of the playoffs, they'll have to figure out how to stay afloat until then.

"It gives me chills," Thompson said, "thinking about how good we could be at full strength." 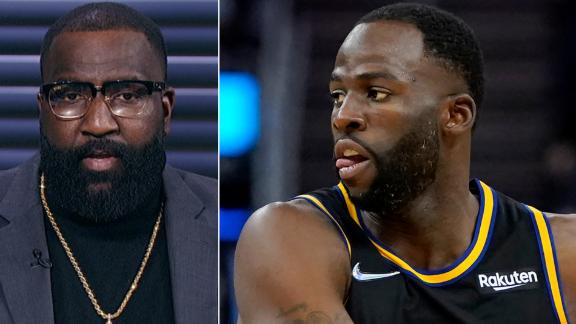 Perk: Draymond's return will 'fix everything' for the Warriors
Kendrick Perkins explains how important Draymond Green will be for the Warriors upon his return to the lineup. 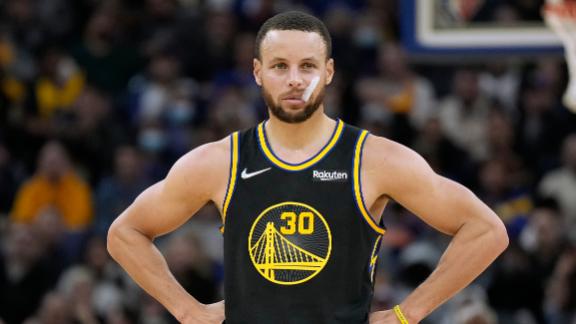