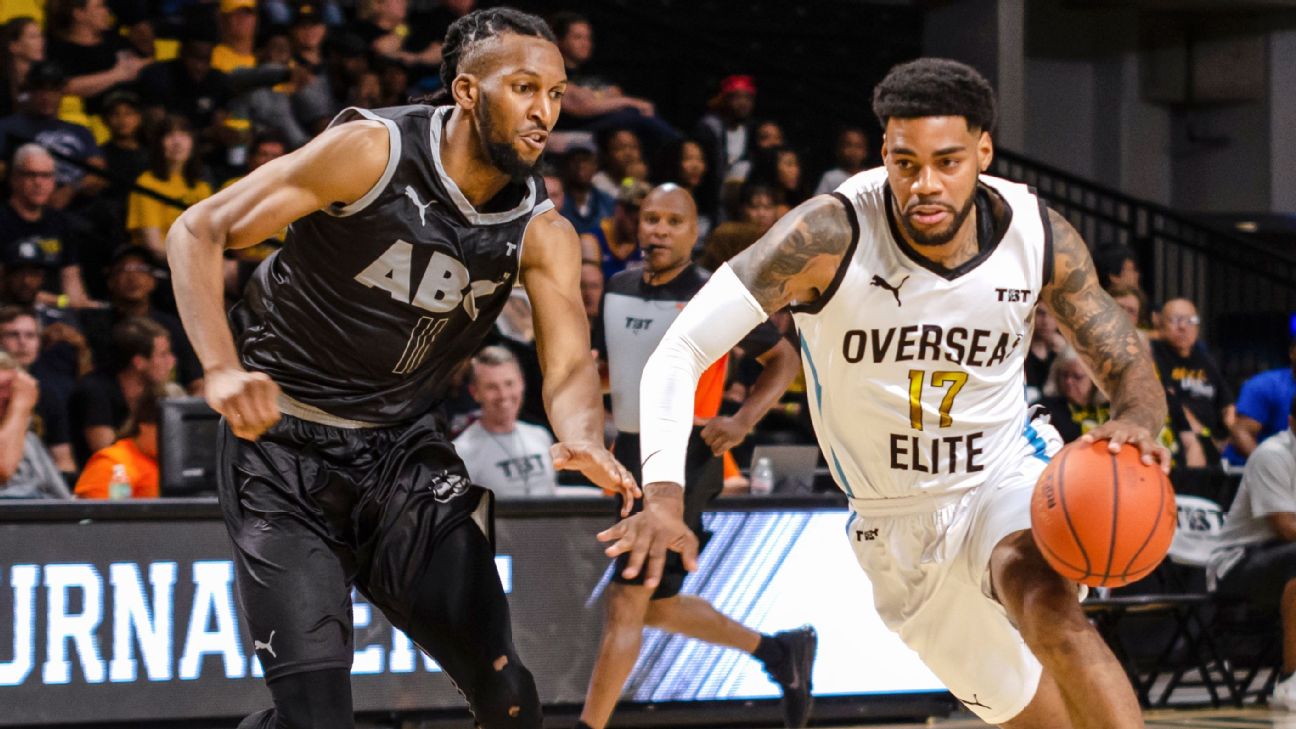 Between a wild Cinderella story from the No. 8-seeded Jackson TN UnderDawgs and Overseas Elite keeping its pursuit of perfection alive, the sixth iteration of The Basketball Tournament is living up to the hype.

This is just the beginning, though, as the tournament's quarterfinal round begins Thursday (7 p.m. ET on ESPN), with eight teams looking to complete their quest over the next week at the Wintrust Arena in Chicago for the $2 million winner-take-all prize.

As we reshuffle the deck, we take a look at the top 25 players who could have the biggest impact on this tournament. Our rankings are not based solely on past collegiate or pro achievements -- they are a cumulative look at the player's history in TBT, how they are performing this summer, and what they have accomplished recently, either in the NBA or overseas:

No one has produced a better TBT career than the ex-Red Storm forward Kennedy. The superstar is not only a former event MVP but has responded to every challenge that comes with being the best player on the best team in TBT history. This summer, Kennedy is averaging 18 points, 10.5 rebounds and 4 assists per game while posting a strong defensive rating of 8.

Buycks may not have as much historical TBT success as Kennedy, but the ex-Marquette guard can fill it up in a hurry. He leads remaining players in the event in scoring (29.5 PPG) despite averaging just 28.8 minutes. Beyond his success this summer, the 30-year-old played with three NBA teams and had the most successful stint of his professional career in France, where he captured the French Leaders Cup and a French Pro A Foreign MVP.

Barford is best described as a scoring machine. The former Arkansas guard is averaging 25.7 points, second in TBT for players still participating, while grabbing 6.7 rebounds and dishing out 5.7 assists per game. He has guided the eighth-seeded Jackson TN UnderDawgs on a remarkable, unexpected run to the quarters, dropping 35 in the second round before adding 29 in a round-of-16 victory over Louisiana United.

Cal's all-time leading scorer continues to be a clutch standout at TBT, as he leads Eberlein Drive in points (20.7 PPG) and assists (3.3 APG). Randle hit game-winning shots in the first two rounds, a wild 3 with a hand in his face to defeat Team Utah and a smooth layup to top the L.A. Cheaters. That offensive punch and fearless mentality has extended to the professional ranks, where he has won an NBL MVP in 2017 and a championship in Lithuania.

The former NBA player has taken his game to the next level this summer, averaging 21.7 points, 6.0 rebounds and 4.3 assists a game. While Nick Calathes (whose TBT is over, as he is en route to Greece for national team duty) has been the team's top playmaker and Kyle Hines is crashing the glass consistently, James seems to be nearly unstoppable. A former Southland tournament MVP and the first two-way player in NBA history to sign a standard contract, there is no way to argue against James' talent and overall credentials.

While Wilson has played only one game with the Golden Eagles so far this summer, his impact in the Super 16 was everything Marquette fans expected. The forward scored 22 points and grabbed eight rebounds while providing a secondary option for Buycks. Wilson's recent NBA success separates him from others on this list -- he started 10 games with the 2017-18 Clippers, averaging 7 points per game in successfully helping to replace an injured Blake Griffin.

Kennedy is Overseas Elite's best player, but Pargo isn't far behind. The guard is averaging 16.5 points, 6.5 assists and 5 rebounds per game while contributing with solid defense. In addition to his NBA experience, the 33-year-old won four Israeli League championships, was an All-EuroLeague second-team member and captured the Israeli League MVP in 2010.

While Darius Johnson-Odom's scoring prowess has emerged as a critical piece for Loyalty Is Love, Jackson's all-around abilities cannot be overlooked. The former Baylor guard is third on the team in scoring (16 PPG), first in assists (7.5 APG) and second in rebounding (7.5 RPG). His 26 points in the first round helped DeMarcus Cousins' squad hit the 107-point mark in a nine-point victory over Hoopville.

Johnson-Odom has been a pleasant surprise this summer, as the ex-Marquette guard has emerged into Loyalty Is Love's top scorer by averaging nearly 21 points a game. The lefty was unable to stick at the NBA level but has been a star in the G League, averaging 22.5 points per game for the Iowa Wolves in 2018-19.

Aaron Craft's defensive work and all-around leadership make him the most indispensable player on Carmen's Crew, but it's Buford's scoring that has taken the Ohio State alumni's team to the next level. Buford is averaging 21 points, including dropping 23 in the squad's 14-point Super 16 win over Red Scare (Dayton alumni) and 24 in a second-round victory. The guard was a two-time second-team All-Big Ten honoree with the Buckeyes before transitioning to the D League and eventually a career overseas.

The former Baylor center is playing his first stint of competitive basketball in the United States since being diagnosed with Marfan syndrome in 2014. Austin has picked up right where he left off with the Bears, as he's averaging 18 points and 2 blocks per game. The 7-foot-1 center has formed a dangerous big three for Loyalty Is Love alongside Jackson and Johnson-Odom.

The No. 1 overall seed must have three players in the top 15, right? Burrell certainly deserves this honor, as the former St. John's big man is averaging a double-double (13 points, 10 rebounds) while serving as one of Overseas Elite's top rim protectors. The 6-foot-10 forward has been a force overseas, too, averaging double figures in points with four teams over the course of five seasons abroad.

The former NBA journeyman shot a combined 9-of-35 from the field in his past two games, but he put up 20 points in an opening-round victory over Team Utah and has contributed in more ways than one. Sloan is averaging 15.7 points, 6.7 rebounds and 3.0 assists per game and has developed into the No. 2 option for the No. 1 seed in the Salt Lake region. The 6-foot-3 guard played five seasons in the NBA, with his best campaign coming in 2014-15, when he averaged 7.4 points in 53 games with the Indiana Pacers.

A game-winning 3-pointer in the Golden Eagles' matchup against Team Colorado might have single-handedly placed the Milwaukee native Cook on this list. However, the ex-Oregon Duck (that's right, he's not a Marquette alum) scored 21 points on 8-of-12 shooting and grabbed nine rebounds in the first round before dropping 26 points in that last-second win in the second round. Cook scored only a single point in the Super 16, but his first-team All-Pac 12 honor in 2016 speaks for itself.

After reaching the Super 16 last year, Team Brotherly Love is taking things one step further. It was supposed to be Jason Thompson who guided the Philadelphia-area squad (Thompson is expected to join the team this weekend), but instead, it's been all about Gadson. The ex-Rider forward is averaging 19.7 points, 5 assists and 4.3 rebounds per game, producing his best game in an upset victory over Boeheim's Army (Syracuse alumni).

The former NBA staple has become a perfect complement to Loyalty Is Love's big three. Averaging 13.7 points and 9.3 rebounds per game, the big man provides a soft touch and physical play around the basket while adding valuable experience. The 6-foot-11 forward had a successful D League career -- he was an All-Star in 2015 -- before logging time with four teams in the NBA.

Craft has essentially been a coach on the floor his entire career, and his stint with Carmen's Crew this summer is no different. The point guard is averaging 11 points, 4.3 rebounds and 3.3 assists per game, while making his presence felt on the defensive end, per usual. His 3.3 steals per outing ranks first on the team, and his consistent energy has helped the Ohio State alumni squad allow only 72.3 points per game.

The former Drexel Dragon dropped 25 points on 9-of-14 shooting in a second-round upset against Armored Athlete and is averaging a stellar 17.7 points, 5 rebounds and 4.3 assists per game. He was a two-time first-team All-CAA member during college and now plays for Andorra of the Liga ACB league in Spain.

Playing in his first TBT, Rowsey has shined as a consistent fourth scorer for the Golden Eagles. He hasn't shot the ball particularly well from beyond the arc, however -- the guard is averaging 12.7 points and has scored in double figures in all three games of the tournament.

Miller provides more depth for Loyalty Is Love, as the ex-Baylor Bear is averaging 12 points and 7.3 rebounds per game. The forward was a second-round pick in the 2012 NBA draft and had the best season of his career (4.9 PPG in 15.2 MPG) with the Denver Nuggets in 2013-14. He never found a consistent home, though, bouncing around the NBA before thriving overseas.

While Kennedy, Pargo and Burrell get all the headlines, Brown is flying under the radar as a lethal option. A solid 3-point shooter and an effective scorer, the 34-year-old is picking up where he left off during his NBA days. Brown, who is averaging 15 points per game, played with the Rockets as recently as 2017-18.

While Nick Calathes (whose tournament has concluded) ranked as our best player on Team Hines before the tournament, team namesake Kyle Hines has developed into the second-most-potent star on the roster behind Mike James. The 6-foot-6 forward is averaging nearly a double-double (9.0 PPG, 8.3 RPG) while supporting the best average defensive rating (6.0) on the team. Hines' excellent play in TBT doesn't come out of nowhere, as he is a four-time EuroLeague champ, a two-time EuroLeague Best Defender and a five-time VTB United League champ with CSKA Moscow.

Lighty's 15.7 points per game rank second on Carmen's Crew, while his 4.7 assists top Craft and the rest of his teammates. The guard's ability to score, distribute and take care of the ball helps the Ohio State alumni team run efficient offense. His valuable experience through winning three LNB Pro A championships has proved to be critical.

Ledo never got onto the court at Providence due to eligibility issues, but the guard is a born scorer dating back to his days as a top-25 recruit. Since then, Ledo was a second-round NBA draft pick before playing with the Mavericks and Knicks. The style of play in TBT suits Ledo's game perfectly, as he is averaging 11.3 points while posting a decent 3.7 average defensive rating.

Thompson was unable to play during Brotherly Love's run to the Syracuse regional title, but you can expect him to make up for lost time this weekend. The 33-year-old has 588 games of NBA experience to his credit -- his last meaningful timewas during the Raptors' 2015-16 playoff run -- and at 6-foot-11 will be a matchup problem for Team Hines in the next round.