KGO
By Casey Pratt
SAN FRANCISCO (KGO) -- The Warriors gave the phrase "take a seat" a new meaning today. As they surprised a longtime season ticket holder with his new seats inside the Chase Center.

Tim Healy, who has been a season ticket holder since 1987, and has been attending Warriors games since the 1970s, installed his own seats with the help of Warriors President Rick Welts, and former Warriors star Tim Hardaway.

They even gave Healy an exact replica of his new seat to take home as a souvenir.

The seat installation marked a significant moment in the construction of the team's new home because it signifies that the finishing touches are underway. Now they just have to install the other 17,996 seats before the team moves into their new home next season.

The Chase Center began construction in January of 2017, and is on track to open on time. The arena has grown by leaps and bounds with each of our visits. Larry Beil and myself were the first media members to step foot on what would later become the arena entrance for concerts, the first to get video of the lower bowl of the arena, and the first to walk where the court is being built. With each trip, the Chase Center is practically unrecognizable from the previous visit.

And speaking of the arena floor, Welts confirmed to ABC 7 today that there is indeed a Rick Barry bobblehead buried where one of the free throw lines will be located. But as far as he knows, there aren't any other hidden relics.

The Chase Center is set to open in September of 2019, and the Warriors plan to host 200 events a year there with games, concerts, and shows.

Take a look at more stories and videos about the Golden State Warriors.

About to embark upon @ChaseCenter tour number 3. Every time I come here the place looks completely different. I’ll try to post some live updates as we go. #dubnation pic.twitter.com/C85evvcR8H

You can really see the arena bowl and court now. pic.twitter.com/tXG3iUxutA

First seats at the @ChaseCenter. Waiting for my turn. pic.twitter.com/cJIgqVsbn9

Last time I was here the roof was just being started. Now look at it. #DubNation pic.twitter.com/f4pUb9zyHo

I checked with @RickWelts and he said there is indeed a Rick Barry bobblehead buried where one of the free throw lines will be at the @ChaseCenter. But said there are no other hidden relics — that he knows of. #dubnation 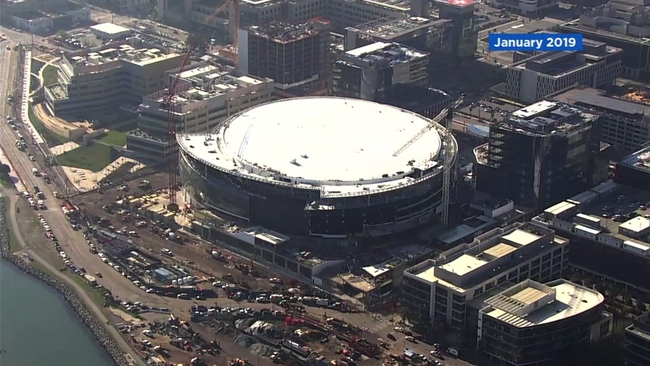