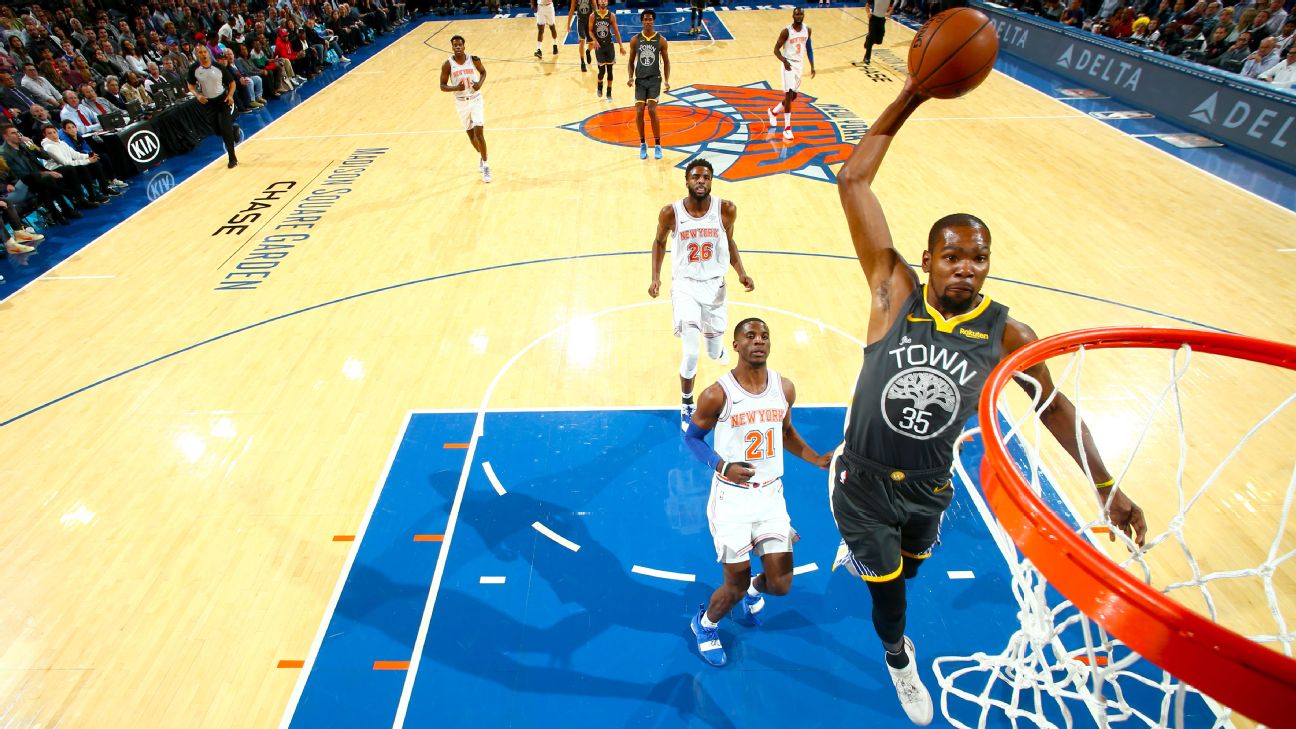 NEW YORK -- Kevin Durant gave the New York Knicks a glimpse of what they hope their future will look like on Friday night while reminding the Golden State Warriorsand the rest of the NBA just how dominant he can be when he takes over.

The All-Star forward scored 41 points, including 25 in the fourth quarter, as the sellout crowd of 19,812 at Madison Square Garden watched the Warriors' 128-100 win in awe.

"You know when you catch every green light when you're trying to get somewhere?" Durant said of his fourth-quarter performance. "That's exactly what it feels like."

One game after teammate Stephen Curry dropped 51 points in three quarters during a win over the Washington Wizards, it was Durant who left the New York City crowd wanting more as the Warriors roared past the Knicks, outscoring them 47-16 in the fourth.

"What do you think I thought of Durant's performance?" Warriors coach Steve Kerr, a lifelong Los Angeles Dodgers fan, said while channeling his inner Tommy Lasorda. "My god -- 41 [points] and 25 in the fourth. Some of those shots -- crazy. He was just spectacular."

Durant finished 17 of 24 from the field and 5 of 9 from 3-point range. He also collected nine rebounds and five assists.

As he did after Thursday night's practice in Manhattan, Durant didn't tip his hand regarding his future as many continue to speculate that if he were to leave the Warriors this summer as a free agent, the Knicks would be the team he chooses.

"It was great," Durant said of the atmosphere at the Garden. "It's always great in here. The crowd's always loud -- they enjoy every play, no matter what team it is. If it's good play, they're cheering for it. That's pure, I like that."

Both Durant and his teammates have been clear about trying to enjoy the present and not worrying about what may happen in the future. Curry appreciates how Durant is dealing with the constant chatter about what the two-time Finals MVP decides about the future.

"The way he's handled it, obviously letting his play speak for itself," Curry said. "Not getting too wrapped up or involved with it, understanding we got seven more months of this so we know how to keep distractions out of our locker room and just play basketball and enjoy what we do."

Durant outscores Knicks by himself with 25-point fourth quarter
Kevin Durant catches fire, putting up 25 points in the fourth quarter and 41 points for the game.