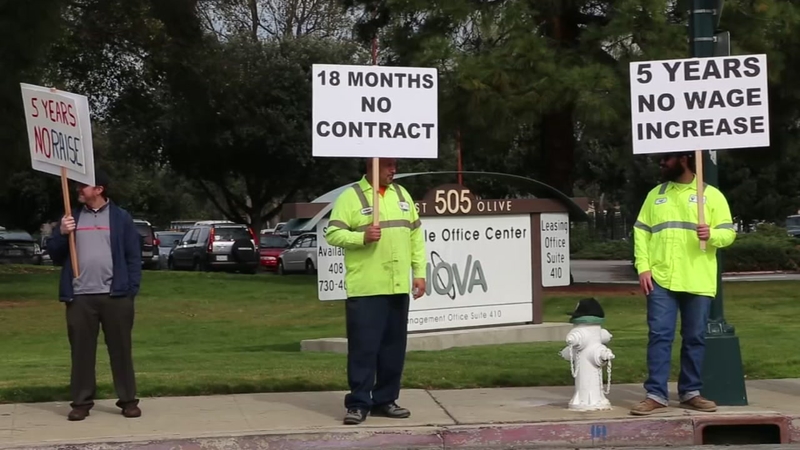 SUNNYVALE, Calif. -- About 120 Sunnyvale union employees rallied Wednesday afternoon across the street from the city council chambers to advocate for fair wages because they haven't had a net wage increase in five years, union officials said.

The rally started at noon at 505 Olive Ave.

The roughly 120 employees make up about a quarter of the more than 450 employees of the Sunnyvale Employees Association, which are clerical workers, engineers, planners, accountants and parks maintenance workers among others.

SEA employees make up roughly half of the full-time employees in the city.

Union officials said that cost of living has gone up 14.2 percent and union employees have had one 3 percent increase over the same time period.

DeRollo said that has gone to pay the employees pension.

Employees are asking for a 20 percent raise through January 2019.

Ten percent would be retroactive to July 2015, according to city officials.

City officials said they have to balance the demands for higher wages with city expenses.

"And that is the case here," city manager Deanna Santana said.

City expenses have gone up more than revenue driven by increased costs for pensions, health care and operational goods and services.

City officials said the cost of living in the San Francisco Bay Area jumped 7.5 percent between 2012 and 2015, while SEA employees' wages went up 3 percent as union officials said.

But city officials argue that cost of living is only one part of the wage picture.

City spokeswoman Jennifer Garnett said merit increases and promotions should also be taken into account. When that's done, the wages of most employees have exceeded inflation, Garnett said.

Santana also argues that employees should consider that the city pays one half of the cost of the employee's pension contribution.

But public works employee Ingrid Christiansen said she feels as if city officials are not seeing the employees' side.

She's been a city employee for 20 years and she's had to take a second job.

"City leaders are taking a deaf ear to that," Christiansen said.

She feels as if city officials have lost perspective.

"We just want to support our families," she said.

Christiansen loves working for the city, but her rent has risen about $700 in five years and she's a single mom.

"I'm only one of many," she said. City officials include the value of benefits when they report how much a city employee earns.

But that's "not something we can take home and feed our families with."

City and union officials met in a fact-finding hearing today where each side will present their case to a third party, who will write a report on the negotiations. The results of the report are sent to the union and city council and are not binding.

Should the fact-finding effort fail to result in a new contract, SEA employees could decide to go on strike.

"Basically, we're at the end of the bargaining process" before things become more drastic, DeRollo said.