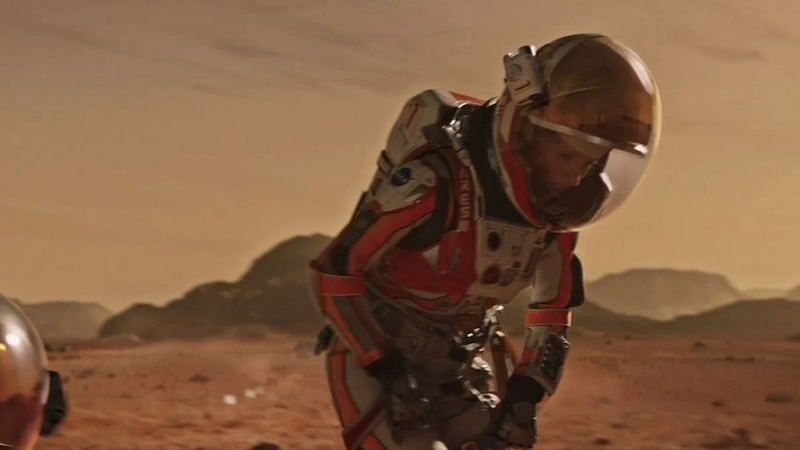 SAN FRANCISCO (KGO) -- One of the nominees for an Oscar for Best Picture is a science fiction movie that's rooted in science fact. ABC7 News took a look at how the team behind "The Martian" used present-day innovation here in the Bay Area to tell a story set in the future.

A mission to Mars 20 years from now could look like a lot like what is depicted in the 20th Century Fox movie "The Martian". And if there's a problem solving it here on Earth would probably look like a video conference call.

In a San Francisco conference room, Cisco showed us a wall-sized telepresence device and its little table-top sibling is shown several times in the movie.

"The producers reached out to us and asked us to come and show them the latest and greatest technology," Trollope said.

Cisco didn't have to try too hard. It turns out NASA's real jet propulsion laboratory actually uses this system -- for exactly the same purpose.

"It'll figure out who's speaking in the room, and it'll automatically zoom in," Trollope explained.

Telepresence isn't the only real world innovation 'The Martian' borrows from Silicon Valley. Writer Andy Weir made some good friends right up the road at NASA's own Ames Research Center.

"He talked to quite a few people that used to work at NASA, that work at NASA now," Stephen Jurczyk, NASA's associate administrator for space technology.

Jurczyk says all that homework paid off. He said, "The Mars ascent vehicle, or 'the MAV,' that looks very much like a MAV design that we would have now, actually fueling it on the surface because it'd be too heavy to land with the fuel."

But the story does take a few liberties.

"The windstorm that blows people and things around, the Martian atmosphere is very thin and so even with a very high wind, it really wouldn't blow things around like that," Jurczyk said.

And with video conferencing too, there were a few more liberties taken. Although Cisco has sent systems to space, the speed of light just isn't fast enough to connect in real time.

"That's one of the biggest problems of long distance space travel, is communication lag," Trollope explained.

To the International Space Station, the delay is a few seconds. But en route to Mars, it would be several minutes.