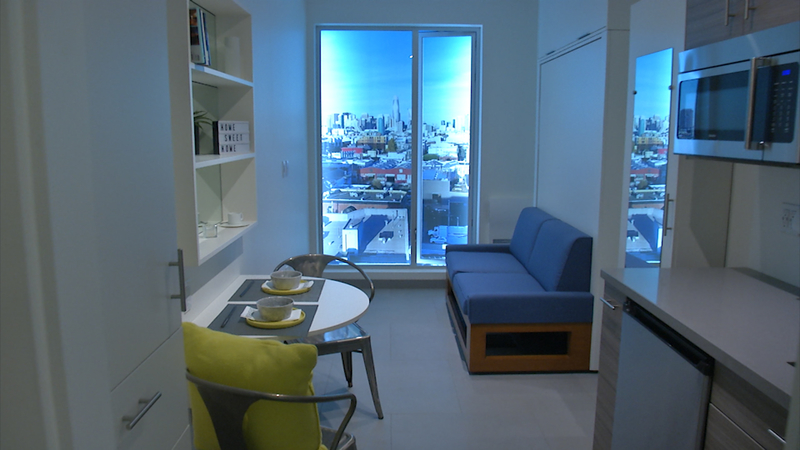 SAN FRANCISCO (KGO) -- ABC7 News is committed to Building a Better Bay Area. All this week we are looking at the Bay Area's housing crisis.

Many communities around the Bay Area are struggling to figure out how to solve the regions housing needs. One San Francisco developer thinks going smaller is the answer.

The Bay Area has a housing shortage, too many people, and too few homes. A project at 12th and Harrison streets in San Francisco is designed to help by making apartments smaller, but more efficient. One building will house 200 individual apartments, the other five with multiple units sharing a kitchen and other living amenities.

"Our philosophy is to make every square inch count," developer Patrick Kennedy of Panoramic Interests.

His company builds CITYSPACES, high density homes designed to maximize living space and apartment density. Units like one on display in his company office. Tiny homes with just about everything you'll need to live comfortably.

They are simple. A couch turns in a Queen sized bed, there is storage, a kitchen with mini-fridge, and a bathroom that includes the toilet in the shower.

"We don't profess that it is for everybody," said Kennedy. "And we don't force it on anybody, we just want to make the city and all its opportunities accessible to everyone as cheaply as possible, said Patrick Kennedy."

Kennedy says the Bay Area's job boom means we need to be building more homes along transit corridors. His micro-housing plan allows for more people to live next to the regions existing commuter infrastructure.

"In order for people to have proximity to the jobs, they need to live somewhere with a reasonable commute, and the only way to do that now in the Bay Area, with our traffic more or less at capacity, is to build housing close to transit," said Kennedy.

He's proposed this 23-story project next to West Oakland BART, 1000 units one stop away from jobs in San Francisco, walking distance from Oakland's busy downtown.

The building is getting some positive reaction from city leaders. Critics worry about the lack of parking the building provides, just 59 spaces.

That's a huge problem in Berkeley.

Kennedy wants to convert this empty Berkeley lot to housing, using his high-density design. It typically would be a single-family home, he envisions something that looks like this.

The units would be modular, prefabricated off the property and craned into place.

"You can build an economical and perfectly function studio apartment for homeless people for half the cost, or even a third the cost of San Francisco is spending now," said Kennedy.

Kennedy is still working with the City of Berkeley to build the units. The city has expressed concern about the density of the project. They wouldn't answer our repeated requests for an interview.

"If we have to we'll have to sue them on that, but we'll prevail ultimately," said Kennedy.

Kennedy says that would be a small sacrifice to make a big difference.