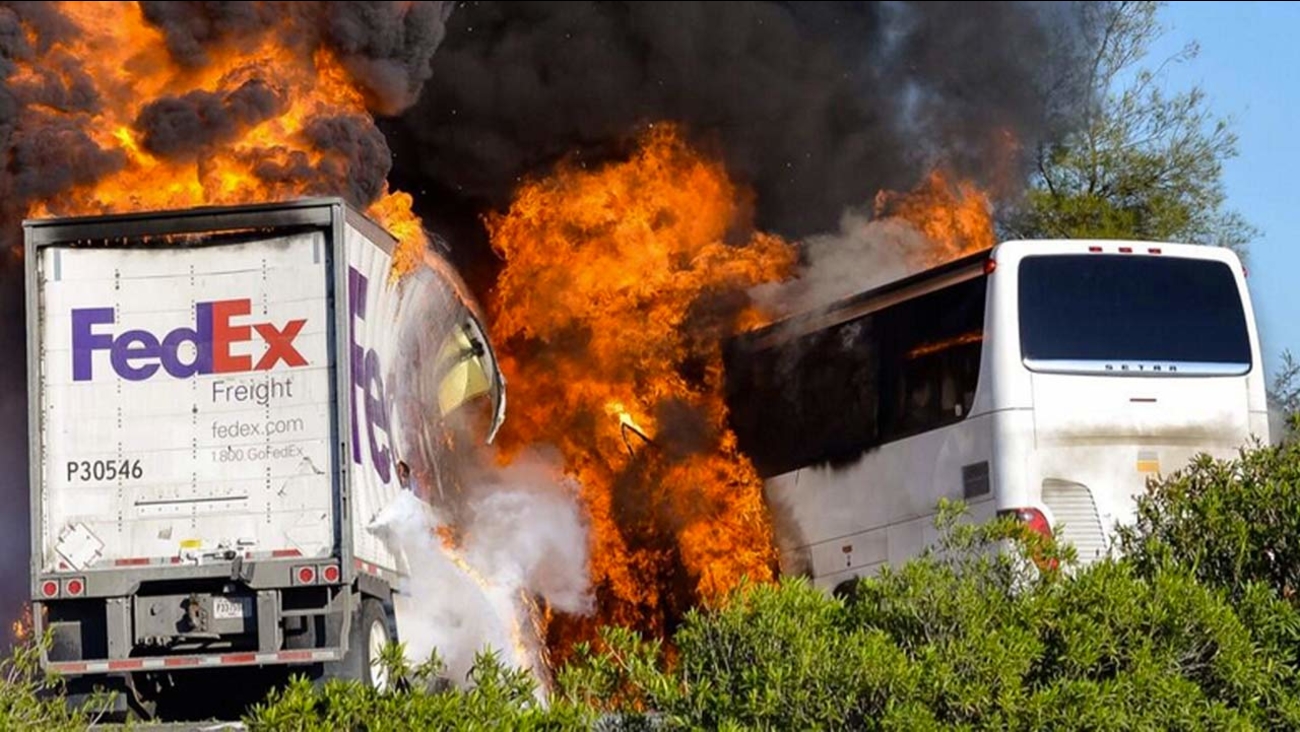 KGO
ORLAND, Calif. -- A FedEx tractor-trailer crossed over a grassy median on a Northern California freeway and slammed into a bus carrying more than 40 high school students in an explosive crash that left 10 people dead, authorities said.

Among the students on the trip to visit Humboldt State University was Steven Clavijo, 18, a senior at West Ranch High in Santa Clarita, who planned to enroll in the school. Just as Clavijo was trying to catch a nap Thursday afternoon, he said he felt the big vehicle begin to shake from left to right and then he heard a loud boom.

"We knew we were in major trouble," he said.

Both the bus and semi driver were among those killed in the fiery crash, authorities said.

Many of those on the bus escaped through a window that someone had kicked open, Clavijo said, running for their lives to the other side of Interstate 5 before hearing an explosion and seeing the bus burst into flame.

Two more explosions soon followed, he said, and he and other survivors looked on knowing others were still trapped in an inferno.

Massive flames could be seen devouring both vehicles just after the crash, and clouds of smoke billowed into the sky until firefighters doused the fire, leaving behind scorched black hulks of metal. Bodies were draped in blankets inside the burned-out bus.

In addition to the drivers, three adult chaperones and five teenage students were killed in the crash, according to the California Highway Patrol. Their identities were not immediately released. The bus carried between 44 and 48 students, four chaperones and the driver, the patrol said.

Eric M. Weiss, a spokesman for the National Transportation Safety Board, said a multi-disciplinary team of highway crash experts left on a flight Friday morning for the crash scene.

"Every piece of paper associated with this will be looked at," Weiss said. "Our first priority (though) is to get out there as quickly as possible and to process the scene and talk to any witnesses."

The crash happened a little after 5:30 p.m. on the interstate near Orland, a small city about 100 miles north of Sacramento.

The bus was one of two that the admissions office at Humboldt State University had chartered to bring prospective students from Southern California to tour the Arcata campus, Humboldt's Vice President of Administrative Affairs Joyce Lopes said.

The bus was owned by Silverado Stages, a tour bus company based in San Luis Obispo. The company said in a statement on its website Thursday night that it was assisting authorities in gathering information.

"Our top priority is making sure that the injured are being cared for," the company said.

Humboldt State President Rollin Richmond issued a statement on the school's website. "Our hearts go out to those who have been affected, and we are here to support them, and their families, in any way possible," Richmond said.

The students came from a number of Southern California high schools and Humboldt spokesman Simon Chabel said the college was working to confirm where exactly they were from.

Los Angeles Unified School District spokesman Tom Waldman said 19 students from 15 schools were on the bus that crashed. District officials, including crisis counselors, left for the scene at about 5:30 a.m. Friday and Superintendent John Deasy was traveling back from a business trip to the East Coast. Crisis counselors were also being made available at district schools.

A high school senior from Alliance Renee & Meyer Luskin Academy High School in Los Angeles said she and a few of her classmates who were accepted to the university were invited to go on the tour.

Sabrina Garcia said the tour began Thursday, with buses taking students in Southern California on the ride to the campus for a three-day stay there. She said she decided to postpone the tour because she had a school project to complete.

"I was devastated when I heard about the crash, and relieved that I didn't attend," Garcia said. "I can't imagine how those kids feel. You think you're going somewhere safe with your school - and you end up in an accident."

A CHP dispatcher says the bus and truck were on opposite sides of the freeway when the truck crossed the median and slammed into the bus, causing an explosion and fire.

Investigators say the truck driver might have been trying to avoid a passenger car that was also involved in the crash, which shut down north- and south-bound traffic on the freeway.

"There was a small white sedan in front of the truck," Heitman said. "The FedEx vehicle did sideswipe the sedan before it crossed the median."

No one in the car was injured.

A first responder who helped set up a triage at the scene said 36 or 37 people received injuries ranging from minor to severe burns, broken legs and noses, and head lacerations.

"The victims were teenage kids. A lot of them were freaked out. They were shocked. They still couldn't grasp what happened," said Jason Wyman of the Orland Volunteer Fire Department.

A nursing supervisor said three people were taken to Oroville Hospital in Oroville. She declined to describe their conditions, citing patient privacy laws.

Bonnie Kourvelas, a FedEx spokeswoman, said in a statement Thursday night: "Our thoughts and prayers are with everyone involved in the tragic accident on I-5 in California. We are cooperating fully with authorities as they investigate."

The American Red Cross set up a relief station at a Veterans Memorial Hall community center in Orland, about 5 miles from the crash site. Officer Joel Lynch said seven victims who were not hospitalized with injuries were staying the night with about 25 volunteers. A community member ordered pizza for the students.


Families of students who may have been affected may contact Humboldt State University Police for more information at (707) 826-5555 or use the Red Cross Safe and Well website to locate students.

Stay with abc7news.com for updates on this developing story