Passengers stuck on plane for nearly 28 hours land at SFO 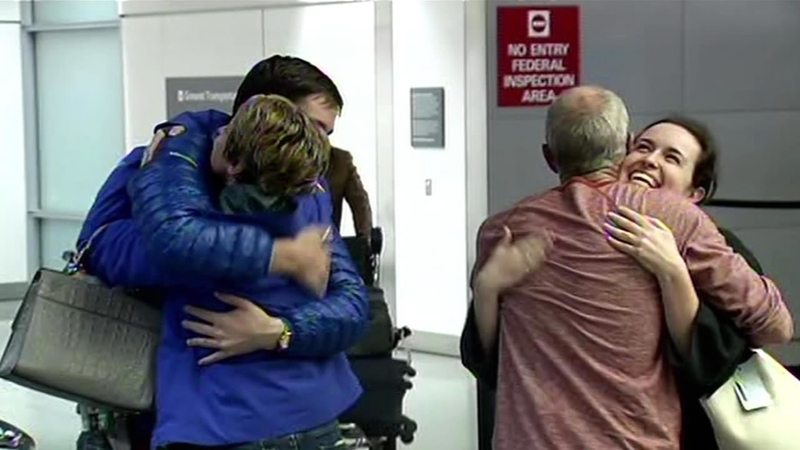 Passengers stuck on plane for nearly 28 hours land at SFO

SAN FRANCISCO INTERNATIONAL AIRPORT, Calif. (KGO) -- Dozens of passengers are finally on the ground at San Francisco International Airport after being stuck on a plane for nearly 28 hours. It all began with a freak fog incident that shut down an airport in Abu Dhabi.

For passengers aboard Etihad Airlines Flight 183, frustration had been brewing for hours.

Fellow passenger Polkit Pahwa added, "Because of the bad weather and the gates, all the flights were grounded or canceled, so they didn't have enough space in the airport to accommodate us to take us out."

A passenger shared a picture of the fog in Abu Dhabi that kept their flight and others grounded for so long.

Fog prompted the shut down of an airport in Abu Dhabi and also delayed Etihad Airlines Flight 183, January 2015.

The plane loaded with kids, seniors, and hundreds of other passengers then had to make the 16 hour flight there to San Francisco for a grand total of 28 hours on the same plane.

Pahwa says passengers did calm down in flight. For his parents, it was a nerve racking wait. All they could send their dad was a text from another passengers' phone.

"Etihad has a website but there was no updated information on the website. You call their number, it just puts you in a loop," said passenger Ajay Pahwa.

Among the last to leave the flight was 77-year-old Leela Nariani. Her daughter, Anita Nariani, is furious with the airline.

"To have them just waiting, especially if they are seniors traveling on it, they've gotta pull them," she said.

The airline has apologized for the delay. They say the fog caused them to cancel 20 flights in Abu Dhabi. One couple says they're happy the fight wasn't canceled.

"We had already had another flight earlier canceled on this trip and it was a nightmare," said Megan Hamilton.

Her boyfriend just proposed on this trip. So she has reason to be happy.

The U.S. Department of Transportation prohibits lengthy tarmac delays. The maximum allowed for international flights is four hours. And carriers must make sure passengers are provided adequate food and water.