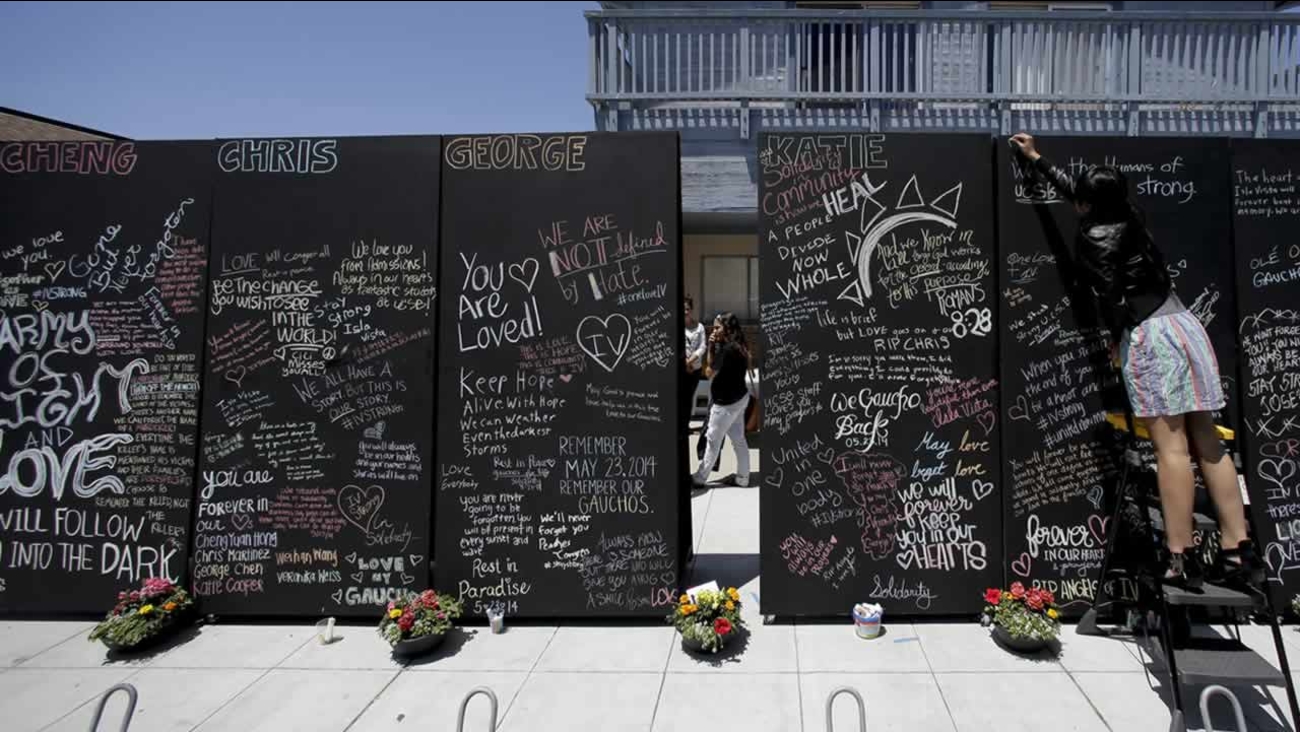 Rinda Sutrarhada, 20, writes the names of the victims on a remembrance wall across the street from the IV Deli Mart in the Isla Vista, Calif. (AP Photo/Chris Carlson)

Thousands gathered at the University of California, Santa Barbara on Tuesday to mourn six students killed in a weekend rampage.

"All died much too young but it's important that we do not let the arithmetic of this atrocity define them," UC President Janet Napolitano told a packed crowd. 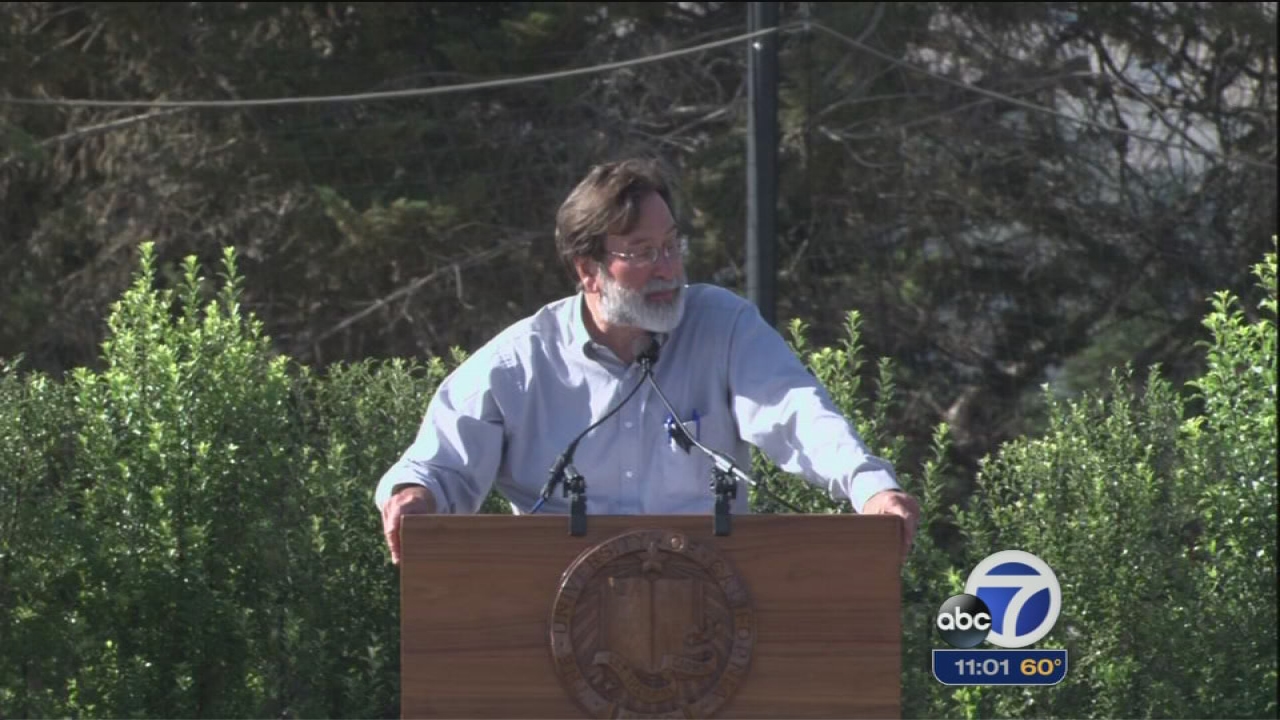 Father demands senseless violence comes to end
The father of one of the victims killed in the Isla Vista shootings spoke to a crowd of UC Santa Barbara students demanding the violence end.

Each of the victims left a mark on the world and "as long as we hold them in our hearts, they are not gone," she said.

The school canceled classes and declared a day of mourning and reflection on Tuesday, four days after the shootings and stabbings in the Isla Vista community by 22-year-old community college student Elliot Rodger, who had posted an Internet video outlining his plan to slaughter as many people as possible.

Rodger had legally obtained three semi-automatic handguns and still had 400 unspent rounds of ammunition when he shot himself to death, authorities said.

"They (politicians) have done nothing and that's why Chris died ... in my opinion," Martinez said.

"It's almost become a normal thing for us to accept this," he said, referring to mass-killings. "It's not normal...life doesn't have to be like this."

He got the crowd to repeatedly chant "Not one more," in reference to such massacres.

He also read statements from the families of two other slain students, James Cheng-Yuan Hong and David Wang, both 20, in which they asked for prayers or blessings on the families of the victims and the killer.

"May we together create a peaceful world and let hatred be gone with the wind," the Hong family statement said.

Schools are back in session for the first time since the deadly attack near UC Santa Barbara. Teachers and administrators are reaching out to make sure that students are taken care of.

At Lynbrook High School, about half the student body never met James Cheng-Yuan Hong. But those who remember him, recall the 20-year-old as a kind student who was quiet and shy but warm and generous. They say he was an ace at mathematics and was a drama star; not in front of the stage, but behind the scenes. They also say he was a person who loved to celebrate random acts of kindness. 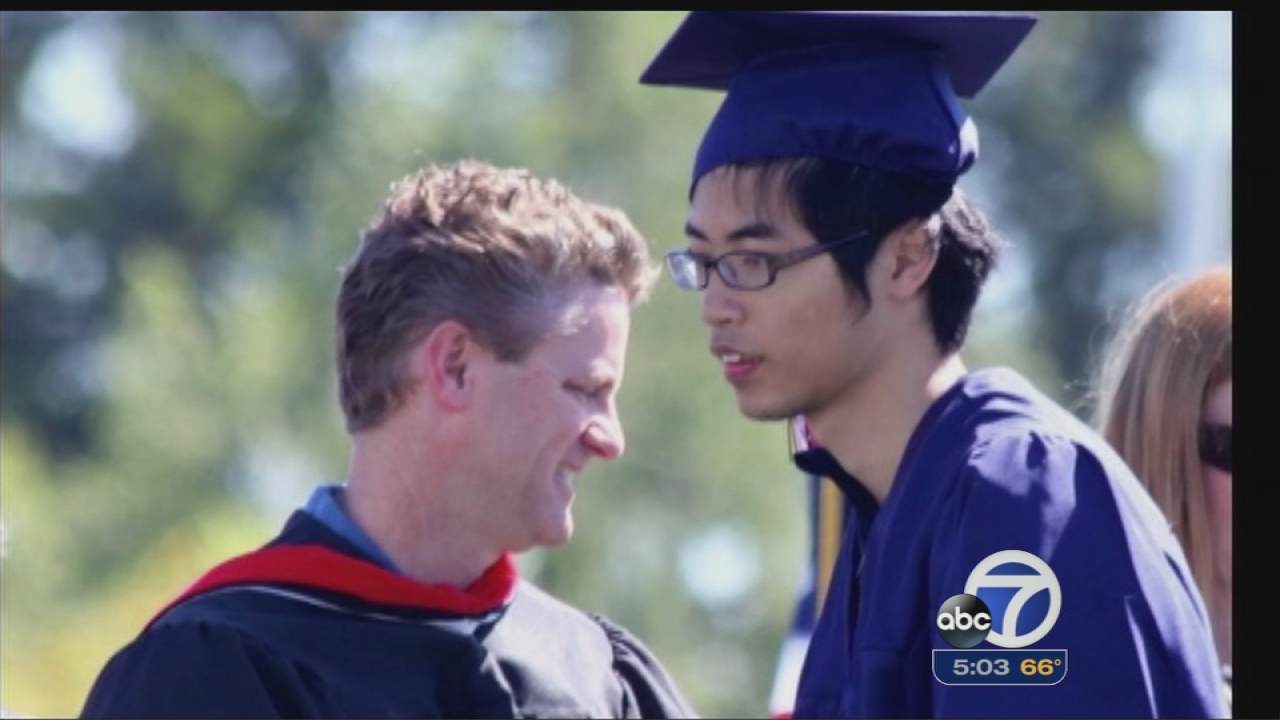 As students arrived at San Jose's Lynbrook High School, the first order of business Tuesday morning was a moment of silence.

"Our hearts, thoughts, and prayers go out to James Cheng-Yuan Hong's family and to all those impacted by these tragic events," said Principal John Dwyer over the intercom.

It was a strange twist on those fabled three degrees of separation. As many students would learn, Hong graduated from their school two years ago with honors. And on Friday night, he died at the hands of his roommate in Santa Barbara.

"I know a couple of kids who knew him, and they are shocked, actually," said senior Sasha Wootton.

Fellow senior Zake Zatz added, "Just the kindest, kid. So generous. So giving. Always willing to help people out. There is no way to handle it."

Grief counselors were brought to Lynbrook High Tuesday morning to help the teenagers deal with the tragic death of their former classmate. But it's not just students feeling the impact of this brutal crime that was committed 300 miles away, the community is feeling the grief as well.

The mother of one student, who doesn't know the Hong family, brought flowers to campus to show her support.

"The more I think about it and the more it just tears at my heart and just again how this effects not just this generation, but the generation for that whole family," said mother MJ Ashley.

Hong wasn't a student who sought the spotlight, but his honesty, academic integrity, and effort in the classroom stood out to his teachers. His work in the drama department is still remembered today.

"He was a backstage guy," said Principal Dwyer. "Not really wanting to be in the limelight, but extremely supportive, very diligent hard working young man. Supported the cast and crew and his drama teacher remembers him as a fantastic young man who had all kinds of practical and technical talents that supported the crew as a whole."

Dwyer went on to add, "As they said, he was the kindest, sweetest young man with a brilliant smile that could light a room up," said Dwyer.

Students were invited into the library Tuesday to write memorials about Hong and also talk to counselors.

Graduation is a week and a half away.

Students, faculty, and staff at Fremont Christian High School returned to class on Tuesday for the first time since the Santa Barbara tragedy. David Wang transferred to the school as a sophomore. 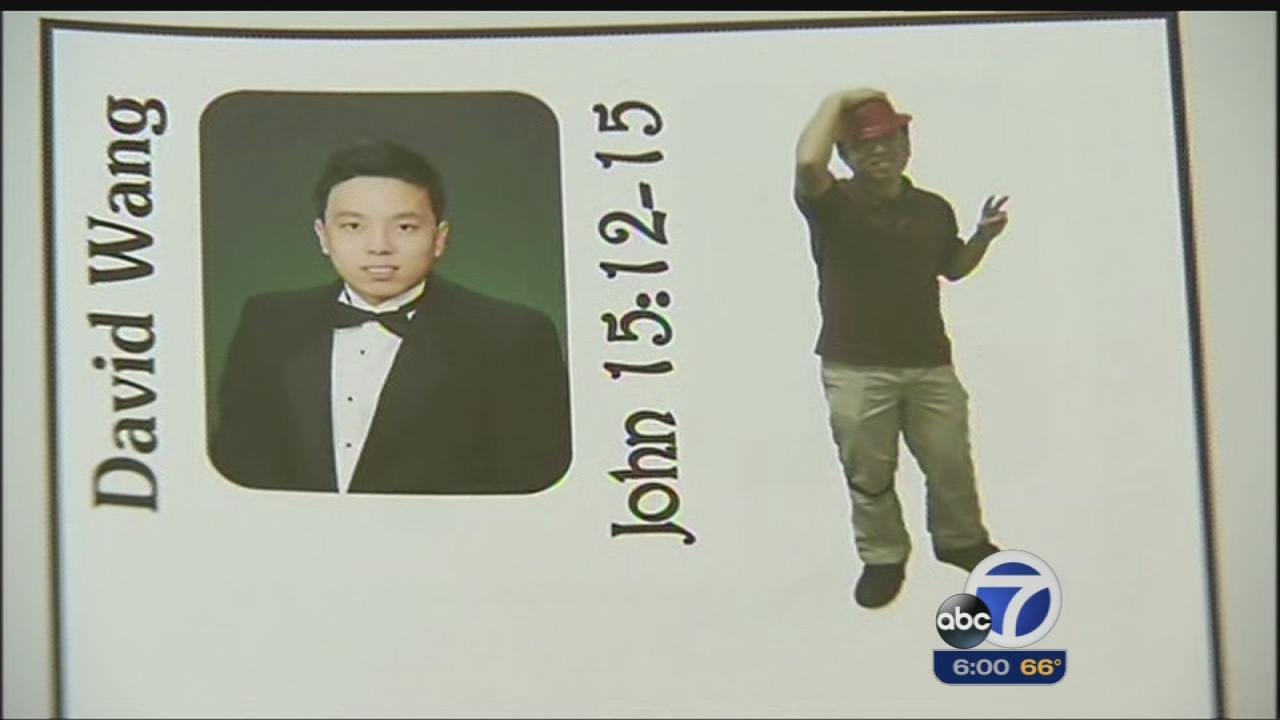 Fremont school to honor Isla Vista stabbing victim
A Fremont high school plans on dedicating a basketball court to a former student who was killed in the rampage near UCSB.

"How people are dealing with it personally? I'm not sure they've dealt with it yet. It's more like taking in news right now," said Superintendent Tricia Meyer, Ph.D.

Meyer found the school's yearbook from 2012. Wang chose to include bible verses that, in retrospect, gave her chills.

She reads, "They're Jesus' words out of John and they say: this is my commandment that you love one another as I have loved you. Greater love has no one than this, than to lay down one's life for one's friends.

On Friday, Wang died next to his friends James Cheng-Yuan Hong and George Chen.

"Reading this and then thinking about how this whole tragedy ended, I don't know if there's any comfort in any of it, but comfort in the fact that he was with friends. I don't know," Meyer said.

In Aug., Fremont Christian will dedicate the outdoor basketball court to Wang. He loved playing pickup basketball at lunch

"We need to put up something that really tells David's story so that whether you come here in five or 10 years, you could read that and you would be able to connect to who that was and what this is about," Meyer said.

Counselors were also at Leland High School in San Jose Tuesday. That's where a third Bay Area victim, George Chen, graduated from from in 2012 before going UC Santa Barbara. Chen's parents visited the memorial scene Monday night. His mother got down on her hands and knees to write a message on the ground to her 19-year-old son. 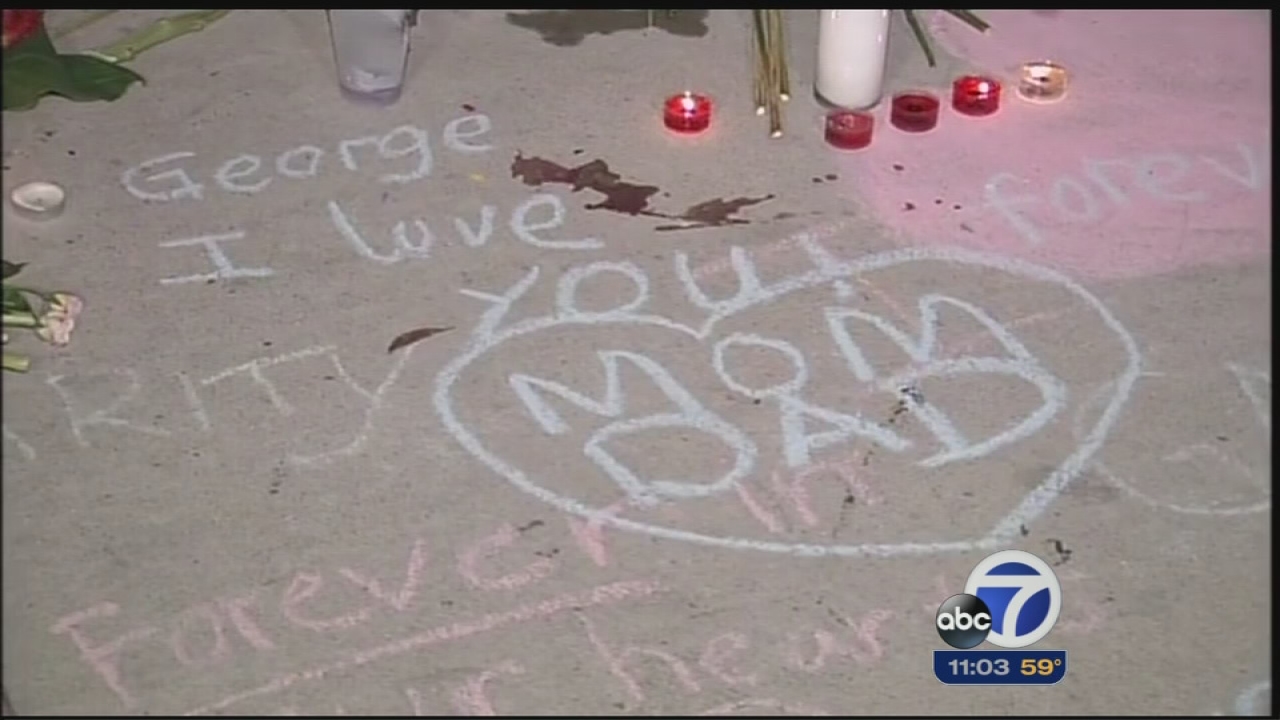 Wang described him as an outgoing young man with an excellent college career ahead of him. His classmates from 2012 are in the process of planning a candlelight vigil in his honor.

Cal to honor victims of killing spree near UCSB

The UC Berkeley community is coming together to honor the victims of the killing spree in Isla Vista.

"The whole point of this to be supportive of the people who need support," said Jo Downes.

The UC Berkeley grad student met ABC7 News reporter Nick Smith on campus at a spot called the Memorial Glade. She is organizing a vigil to show support for the victims of the Isla Vista killings. On Wednesday, the manicured lawn and open space will host a community united in its grief. 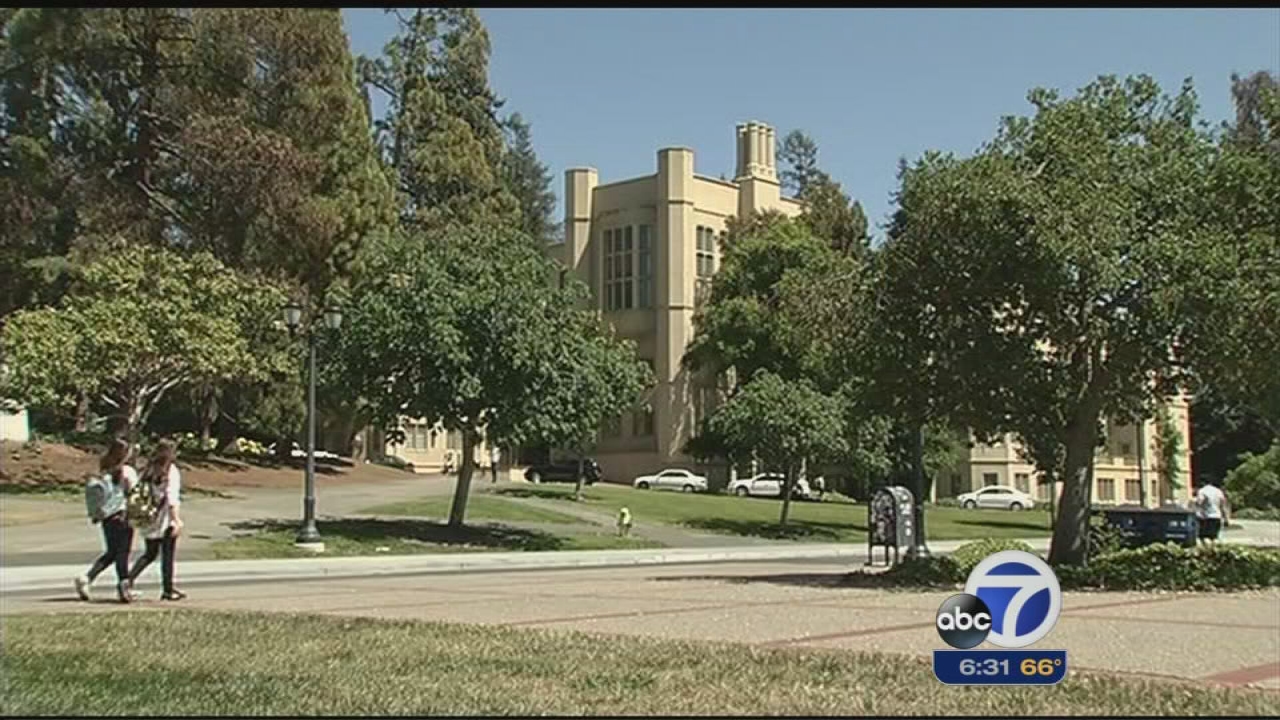 "I am an alumna of UCSB," Downes said. "I especially felt affected by it and I wanted to plan this so that everyone could support each other."

The theme of support has been spreading throughout the UC's, since the violent rampage four days ago.

On Monday night, hundreds gathered at the UC Santa Cruz campus to mourn and remember the six killed.

Many told ABC7 News on Tuesday that what they witnessed happening at UC Santa Cruz was the perfect way to show how they're all connected.

"I myself am from that area, the 805, so my heart is definitely going out to them, all the people affected," said UC Berkely student Nathan Jordan.

Fellow Cal student Ivan Yung added, "Just seeing that people really care. You might not know anybody down there but we're all human and we're all going through some weird things and just that we understand. So, showing them we cared."

"I had a cousin down there and I was worried about him," said UC Berkeley student Raymond Chen. "I saw his post on Facebook and it was good.

UC officials will begin transforming the space on Wednesday with an area for public speakers and candles. Although Berkeley has a reputation for demonstrations, Downes would like the vigil to be about the victims and nothing more.

"There are a lot of reasons behind why this happened," she said. "They make people very angry, certainly I'm very angry about things. But this isn't the time to politicize it."