Woman collects bikes for those who lost homes in Valley Fire 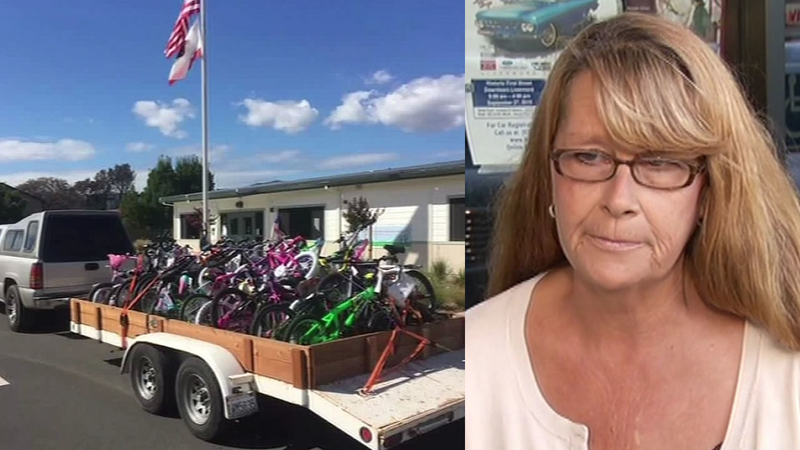 Woman collects bikes for those who lost homes in Valley Fire

LAKE COUNTY, Calif. (KGO) -- The Valley Fire, which destroyed hundreds of homes in Lake County, is now 99 percent contained. While the rebuilding process is just beginning, help continues to come in for families that lost everything, and that includes kids.

This tweet shows the bikes that Valley Fire survivors will receive this weekend and a so-called "bike angel" is making it all happen.

Just days after the Valley Fire began Candy Alcott packed up her own minivan and started hauling donations from her home in Livermore to those who lost their homes in Lake County, especially the kids.

Alcott told ABC7 News, "We need to end this story differently for these children. I don't want them to be forgotten."

She went to work on social media, using her own Facebook page to start collecting bikes for kids and adults. There were plenty of requests.

Two weeks ago, Alcott delivered about two dozen bikes to Middletown. It was great day, but there weren't enough to go around.

Alcott says, "As soon as those bikes arrived, I gave them away, and I had to turn away 25 children. And I promised them I would come back."

So she put out the call again and this time people responded in a big way. Many are offering to transport the bikes to Lake County themselves.

The remarkable effort has earned her a new nickname. She said, "I cry tears of joy because they're calling me a 'bike angel.'"

Alcott's daughter Kelly is helping organize the bike giveaway. She said, "Everybody needed something and at that time, bikes seemed so simple, but it's the mode of transportation for people up there. It's going to be what gets them to work and to school when everything opens back up."

"I promised them and now a lot of people are making my promise come true. That's the best part. It's a miracle unfolding in Middletown," Alcott said.