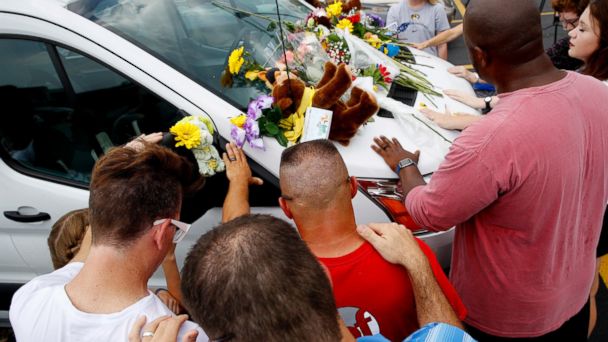 Hundreds gathered Friday night on the shore of Table Rock Lake in Missouri to honor the lives of the 17 people killed when a duck boat sank in rough waters the night before.

Few of those in attendance knew the people who died, many of whom were tourists, but the sentiment was the same: The Branson, Missouri, community needed to show support.

"This has been my community for 10 years, so just hearing about it last night I felt completely helpless at home, not feeling like there's anything I could do, so just coming out tonight was sort of my emotional way of showing support," Alyssa Ambrosier said. "Even though it's not much I just felt like it was my way of being part of the community, sharing my heart however I could."

"We didn't know any of them but if it were to happen to us, we would want to see the same results," her husband, Spencer Ambrosier, echoed.

Josh Daniel, a local, organized the vigil on Friday, which took place in the parking lot for the Ride the Ducks boat tour -- a spot where the vehicles driven to the tourist attraction by the victims still sat.

"It was just one of those things that kept me awake, as I sat and thought about the families," said Daniel, who helped to organize the vigil and spread the word through Facebook. "I decided I wanted to come out here and see it for myself, seeing the cars sitting by themselves. I went over to Walmart and I just put a flower on each one of the windshields.

"We did this because we want the families to know that we care," he added. "This is Branson. This is who we are. You come here, you're family."

Five of the 17 victims were from Missouri.