'Where they belong': Bay Area sports fans make it known, they want A's to stay in Oakland 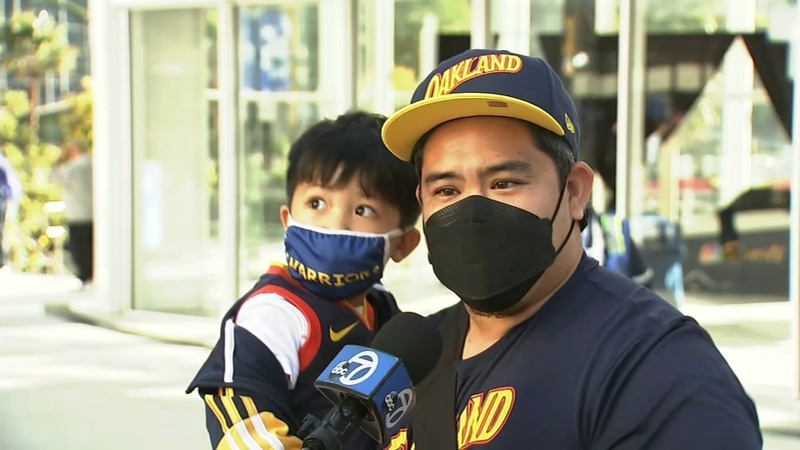 OAKLAND, Calif. (KGO) -- The Oakland Athletics and Major League Baseball are playing some hardball with the City of Oakland. The MLB is now encouraging the team to move if they can't get a waterfront stadium built in Oakland.

Some fans are worried, but others say they've heard the relocation threats before.

Warriors fans were getting ready for Tuesday's game at Chase Center. Many are A's fans too, and they've heard the latest news.

"The Oakland fan in me doesn't want to lose our last sports team, because San Francisco will take over the Bay Area," said Hassani Bell.

"I'd like to see them stay in Oakland forever, that's where they belong," said Austin Fausto.

VIDEO: What will it take to keep the A's in Oakland? Team's president explains
EMBED More News Videos

The A's say there's no future in their current home, the Coliseum. The team wants a waterfront ballpark built downtown at Howard Terminal, but are getting frustrated over delays.

So is Major League Baseball, which said in a statement:

"MLB is concerned with the rate of progress on the A's new ballpark. We have instructed the Athletics to begin to explore other markets while they continue to pursue a waterfront ball park in Oakland."

"Because of the timing and delays and roadblocks, it is just prudent to look at other options, we are just running out of time. That's the direction of the league and we concur with that, we're going to start immediately looking with the league at other markets," said A's President Dave Kaval.

But where? Portland and Las Vegas have been rumored as West Coast options.

Those opposed to the waterfront stadium site, say it's nothing but a big league bluff.

"It's very clearly a tactic to try and pressure people into making a decision before they're ready to make a decision," said Mike Jacob from Pacific Merchant Shipping Association.

The A's have asked Oakland to vote on the $12 billion mixed-use development for a stadium before their late summer recess.

In a statement, Mayor Libby Schaff's spokesperson Jason Berton said, "We share MLB''s sense of urgency, it's clear the only viable path to keeping the A's rooted in Oakland is a ballpark on the waterfront."

Sports radio host Ray Ratto says, the A's pursuit of a new stadium is nothing new.

"They've been through this before, in Fremont and San Jose. So in terms of getting people scared, you're spitting in the wind," said Ratto.

"It seems like Elon Musk is figuring out how to go to Mars, you'd think the Oakland A's could figure out how to build a ballpark," Dolich said.

The A's have called Oakland home since 1968, but are they nearing the final inning? Fans hope not.