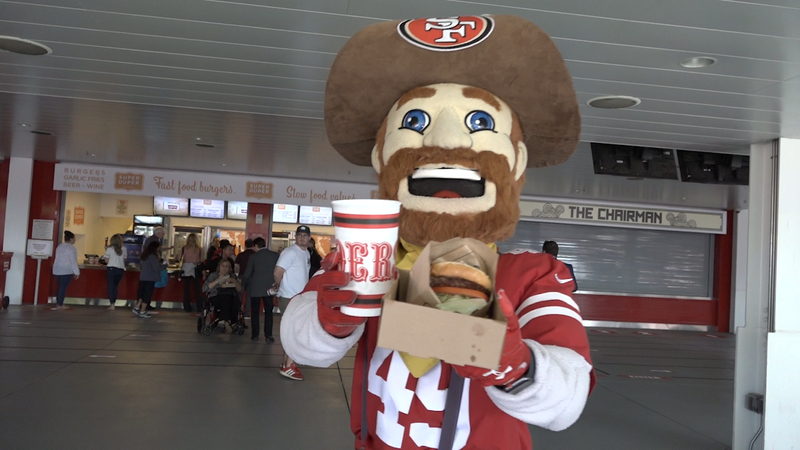 SANTA CLARA, Calif. (KGO) -- When the 2018-2019 season came to a close for the San Francisco 49ers, their hospitality staff focused in on what can make the experience at Levi's Stadium better for the 49ers Faithful.

Through a series of methods, they made changes to their food and drinks to give fans enjoyment in the stands while they watched the game on the field.

"We did focus groups, fan engagement surveys and we really studied what their likes and dislikes were," Levy Vice President of Hospitality Nick Wolfe said. "What we ended up coming up with is all these different varieties of service, quality and local flavors. We have varieties from top to bottom. New burger concepts, pizza concepts, chicken concepts and the local flavors."

Thirteen new food and drink partners join the other returning options in a variety of locations throughout Levi's Stadium.

The partners choices include:

ABC7 South Bay Community Journalist Dustin Dorsey tried out many of the foods the stadium will offer.

Gold Bar Whiskey begins their partnership with the @49ers this season as the official whiskey of the team. Guests today are trying out their signature mule drink today. pic.twitter.com/RzkCqcbT7C

The food ranges in price and variety so that every fan can find what they want no matter where their seat is.

Wolfe said he has been to sports venues across the country and the Bay Area has an incredibly unique food culture.

He wants to make sure that carries to the stadium as well with options brought in from all over the area.

"Levi's has such a premium experience that you don't see and it's all hidden behind the scenes," Wolfe said. "If you look here, these kind of experiences really set the experience at Levi's Stadium different than the rest."

Yes, while I was working I was eating on the job! There’s so many different food items to get at @LevisStadium including a Korean style cheesesteak as recommended by @SollyThomas90 and @T_Giammona pic.twitter.com/twsrC8pWjC

The 49ers hosted a food tour through the stadium for select season ticket holders and others to try the new cuisine.

The event allowed fans to find their favorites early and help solve the issue of finding what they want to eat while the action is happening on the field.

"One of the hardest parts of coming on game day is when you're focused on the games and the lines get long and you don't get to try the different foods," 49ers season ticket holder Donna Schrieber said. "It's really nice to be able to taste something. The food is wonderful, the price is right and we'll be back."

The obvious draw to Levi's Stadium is coming for 49ers games.

However, Wolfe believes the new food choices will allow the entire experience to be something worth coming back for.

"People come here and want to experience a great product on the field," Wolfe said. "But there's nothing better than coming here and seeing your favorite local flavor. It's a great combination of the two. It's a great feel and it massages both sides of your palate and your play."

The varieties of food are unique to Levi's and to the Bay Area, but the people serving the food is what takes it to the next level according to Wolfe.

The 49ers fans buying and eating the food are purchasing the food made by fans of the team as well.

They are all faithful then and faithful now.

"You'll get a good representative wanting to take that brand, the quality, service and variety of that brand, and showcase it," Wolfe said. "They are fans as well. That's the fun part. It's fans receiving from fans and there's nothing like that in the sports industry."

You can catch the new food choices throughout Levi's Stadium during the 49ers playing season.

While the food is delicious at @LevisStadium, the service may be the best part. @sfsourdoughsam is a multi-talented member of the @49ers team. Thanks for the lemonade! pic.twitter.com/7grwRn7MGz