Bus-only lane on Bay Bridge? Commuters sound off on the controversial proposal

KGO
By Cornell W. Barnard
SAN FRANCISCO (KGO) -- Transportation solutions are another key issue, in building a Better Bay Area. There's renewed interest in a proposal to add a bus-only lane on the Bay Bridge.

The controversial idea is being met with Kudos and criticism from commuters.

The evening commute from San Francisco to the East Bay can be a grind for bus riders often stuck in Bay Bridge traffic.

RELATED: Transit ridership declining in the Bay Area, according to UCLA study

"Oh yeah, when the Bay Bridge is backed up, it's an hour to an hour and a half," said Victor Evans from Alameda.

A plan from East Bay Assemblyman Rob Bonta could streamline that commute, by adding a bus-only lane on the Bay Bridge in both directions.

The AC Transit Board of Directors passed a resolution Wednesday, favoring the possibility of a bus-only lane on the bridge.

Officials say within the past year, ridership is up 10 percent.

"We attribute that to the fact BART is overcrowded, riders are looking for an alternative," said AC Transit Spokesman Robert Lyles.

But Drivers we found say, you can't be serious.
"it's going to cause more traffic, and cause more people to be late for work," said Oakland commuter Abbas Hassan.

"No matter what we do, it's going to backed up," said another driver.

But ABC7 News contributor and Chronicle Insider Phil Matier says, doing it on the Bay Bridge could bring 'carmageddon.'

"We barely can do it now with the lanes we have, taking one out for buses, that could cause a riot," said Matier.

Making the bus-only lane a reality will take a large collaboration from various transportation agencies. Ultimately, CalTrans will have the final say, because the Bay Bridge is their property. 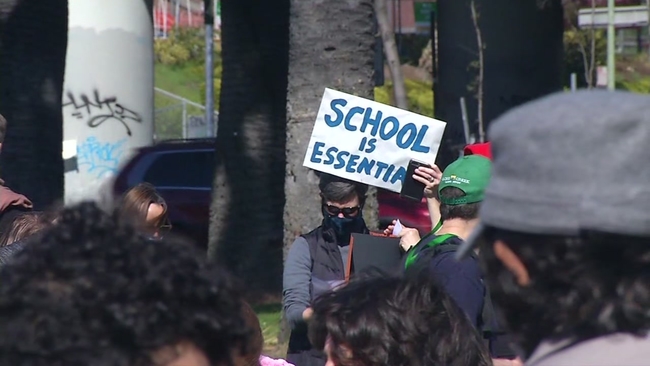 WHO says it's 'unrealistic' to think COVID will end soon
Stimulus check updates: What to expect from Senate this week
French Bulldog theft caught on video in San Jose
500 stolen bike donations recovered in East Bay
American Idol Recap: The contestant who brought Lionel Richie to tears
Show More
FCC approves $50 monthly internet subsidies for low-income households
Several injured, rescued from SF house fire
What is Women's History Month, and why do we celebrate it
Here's when the US will see a lot more COVID-19 vaccine doses
15-year-old injured in shooting at Arkansas school
More TOP STORIES News