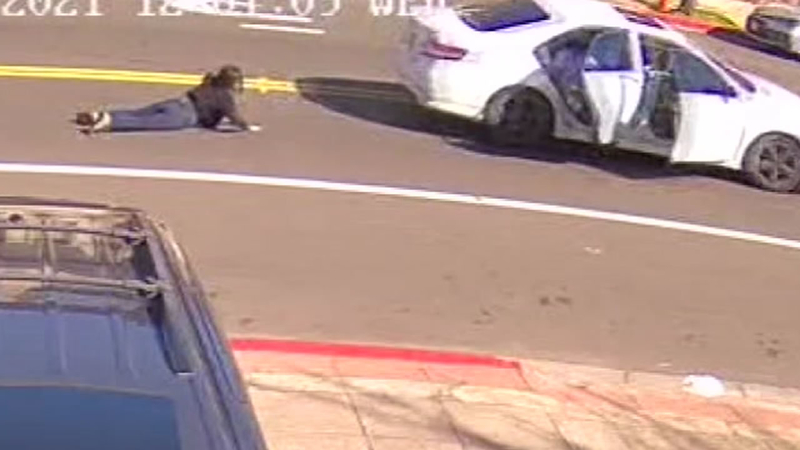 In recent days, Dion received videos showing a woman getting dragged through an Oakland street in a strong-armed robbery as she clung to her purse. Less than five minutes away, another woman was attacked for her bag and her car was stolen.

In San Francisco, a man was knocked to the ground in Japantown for his cellphone. He Google translated what happened on his wife's device, indicating he had been approached by a man showing him a book. In reality, the man had used the book as a distraction.

After so many high-profile attacks many are speaking out for the first time like Nghia Tran, COO of the popular Burma Superstar restaurant group.

"We felt a need and an obligation and responsibility to use the voice that's been given to us by previous generations to speak out and say what's happening," said Tran.

His words come after multiple incidents at their Oakland location, including a man who threw a bottle of sanitizer at an employee when his order was delayed. Another video shows a man, weeks earlier bashing in the front window.

Police are looking for the men caught on camera invading and robbing a home in Oakland's Fruitvale/Central area on Jan. 29.

While these victims are all Asian, it's important to note, not all of these crimes are racially motivated. Many in law enforcement tell ABC7 that Asians just happen to be easy targets for these crimes of opportunity because of their smaller stature. Asian seniors also tend to congregate in places like Chinatowns.

But it's also cultural.

"My parents worked hard and stay quiet so I could have a voice. My parents were robbed in broad daylight as well. My dad with a stoke sitting in his car, he feels helpless and he's screaming," said Tran, who like many Asian Americans feel their parents or grandparents find it shameful to report incidents such as this.

But now that culture is shifting: throngs of Asian Americans are speaking out. Celebrities like Daniel Wu and Daniel Dae Kim offered a $25,000 reward to assist in the arrest of a suspect in the series of attacks on seniors in Oakland. Community members are raising tens of thousands of dollars for patrols. Just recently, a man raised funds to purchase and then pass out hundreds of air-horns in Oakland's Chinatown.

Actors Daniel Dae Kim and Daniel Wu are offering a $25,000 reward for information leading to an arrest of the man Oakland police say is responsible for shoving a 91-year old man to the ground in Chinatown.

Tran himself is now contributing $5,000 dollars to help capture suspects involved in these types of crimes.

Manju Kulkarni of the Asian Pacific Policy Planning Council is co-founder of the STOPAPI Hate reporting center which tracked nearly 3,000 hate-fueled incidents across the country in an eight month period.

"It's really just the tip of the iceberg."

She believes of those reported 90% of these incidents don't rise to the level of criminal activity, but still need to be reported.

"We may not take action on every single one of those as a society but we need to know and understand what's happening," said Kulkarni.

So more resources such as education and safety measures can be dedicated to these incidents, so they don't keep happening.

Daniel Wu and W. Kamau Bell spoke with us about the recent uptick in violence against Asian Americans in the Bay Area as videos of attacks on elderly people have gone viral. They spoke about racism and allyship between the Black and Asian communities.