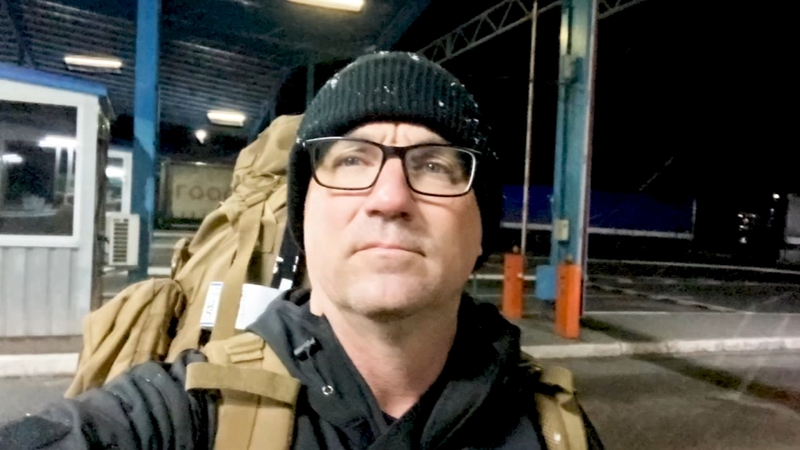 SAN FRANCISCO (KGO) -- We're getting an extraordinary account from an American who went to Ukraine to fight. He's a veteran from the Bay Area who is heading home after a month overseas, and I-Team reporter Dan Noyes spoke with him exclusively.

"I'm a regional maintenance manager, so I support a lot of properties in San Francisco and Oakland."

Kevin Haze's employer wouldn't let him take a leave of absence, so the 49-year-old burned a month of vacation to serve with the Ukrainian military.

Dan Noyes: "Tell me about that decision to go to Ukraine. Why did you do it?"

Kevin Haze: "I mean, the way I saw it was, you know, the only thing you can do against the bully is to punch him in the mouth."

Haze is a retired US Army Ranger from Pleasanton, and when Russia invaded Ukraine, he expected an easy victory for the superpower, but it's been slow and painful.

A group of veterans are on a medical mission to Ukraine, including a Bay Area man who is a newly-retired member of the elite US Army Special Forces.

Kevin Haze: "It just hurt me man to keep watching it. And nobody was doing anything about it... We should have had boots on the ground before any Russian troops went over the Ukrainian border."

Dan Noyes: "You think that would have stopped Russia from coming in?"

Haze flew to Poland all by himself a month ago, got a rental car, and tried to walk across the border into Ukraine during a snowstorm; a guard stopped him.

"And I said, 'Man, I'm going to Ukraine.' And he said, 'You have to ride across the border. And in a vehicle, you can't walk.' So I just went to the stoplight right across the street. And I just started knocking on people's car doors."

A driver offered to take him to meet the Ukrainian military, and it wasn't long before Haze was on this train headed for Kyiv. They gave him a Ukrainian military ID, body armor, a rifle, and a uniform; he added an American flag, and met many foreigners fighting for Ukraine.

"Britain, Ireland, Portugal, may even a guy came from Australia," Haze told the I-Team. "I mean, everywhere, man, Germany, Poland. It's just an amazing thing, how the world can really can really come together whenever it needs to, you know."

He worked with a mostly Spanish-speaking unit from Peru and Colombia, and he provided video to the I-Team of them honing their hand signals. Haze didn't want to go into specifics of what he did in Ukraine.

Dan Noyes: "So, were you actually in the field in combat? Or were you doing training?"

Dan Noyes: "I mean, did you fire your rifle?"

Kevin Haze: "I don't want to talk about anything like that."

A Bay Area volunteer with the American Red Cross traveled to Ukraine on his own to help those in need on the front lines.

From his hotel room in Poland, Haze did say he helped supply weapons and ammunition to Ukrainian forces. Now, he has to head home to his wife and children, while his unit goes to fight on the front lines.

Kevin Haze: "My whole unit is basically going to be in the front next week."

Dan Noyes: "And you wish you had stayed for that?"

Kevin Haze: "Absolutely, man. Absolutely. I mean they're brothers for life, man. That's for sure."

Haze is set to land at San Francisco International on Monday.