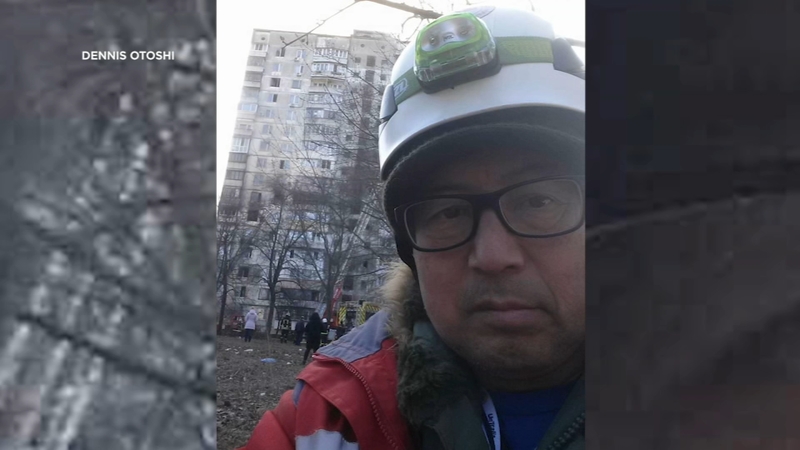 SAN FRANCISCO (KGO) -- The Bay Area is pouring out support for Ukraine and one volunteer is taking it to another level.

"Every time I turned on ABC7 News and I saw what was going on I got angry and I felt I needed to do something aside from waving a flag at the rallies," said Dennis Otoshi. Otoshi's a volunteer with the American Red Cross, which isn't on the ground in Ukraine, but he was determined to get there and did it on his own dime.

"I contacted my friends in the Ukrainian Red Cross and said 'do you need my help' and they said yes of course, and so I immediately flew to Warsaw," said Otoshi, who eventually made it into Ukraine. "It took me a week and finally I caught a refugee train going back in the other direction."

And, he's been putting his nursing skills to use ever since. "As soon as I hit the ground I responded with the emergency response team. We went off in a large ambulance to one of the buildings- this was last Tuesday that was hit by a cruise missile."

A Romanian family and a US-based nonprofit rescue hundreds of Ukrainian refugees, and provided shelter and food as the war with Russia continues

He was on the scene for hours on end and is now holding onto a report card pulled from the ruins, still unsure if the young girl is alive.

"We were gathering up any of the survivors and we were also talking to the relatives. They would come to us and ask questions and we'd try to calm them down," said Otoshi, noting staying calm can be tough.

"You occasionally hear what sounds like the Blue Angels, but then all of a sudden there's a boom and that means the air defenses have successfully knocked it out."

Otoshi is no stranger to a crisis having served across the U.S. and around the world.

"The wildfires we've had. The floods in Nebraska, Louisiana, Texas. Hurricanes. Tornadoes," he said, but nothing quite compares to being at the center of war.

"What we're doing here in Ukraine is kind of on a bigger scale and of course during the forest fires nobody was shooting at me," said Otoshi, who credits his spirit to serve with his upbringing in the Bay Area.

"I think it's just the nature of being a San Franciscan, you know, where people who need help you reach out," said Otoshi, explaining his deep desire to help in Ukraine is also tied to home.

"I grew up with the Russian, Ukrainian, and Belarus community out on Geary Blvd, so that was part of my upbringing."

As far the dangers of the mission, Otoshi is very much at peace with the risk.

"Now that I'm in Ukraine I can sleep well even with the noise and the possibility of being blown up, because I'm doing something directly to help the Ukrainian people."