KFSN
TULARE, Calif. -- The man being hailed a hero by the Tulare County sheriff himself is homebound after what he describes as an eventful day. Thirty-year-old Nathan Wanhala of Santa Cruz is one of three men who wrestled a knife-wielding woman to the ground of a Greyhound bus and restrained her until help arrived.

In a press conference Monday, Sheriff Mike Boudreaux identified the suspect as Teresa Madrigal. The bus was headed to Oakland from Las Vegas, making several stops along the way. Madrigal got on in Bakersfield.

He says just after 2 p.m., as the bus was passing through Visalia, Madrigal turned violent.

"Immediately passengers noticed she was delusional talking to herself talking to spaces in the sky," Sheriff Mike Boudreaux said. "She grabbed a 3-year-old around the neck and held the child at knifepoint."


That child's mother was stabbed in the abdomen as she tried to fight for her daughter.

Sheriff Boudreaux says that's when Wanhala, and two others, Spencer Williams and bus driver, Mike Phillips intervened. Before Wanhala boarded the sheriff's plane, he showed us the injuries he suffered while holding Madrigal down. He says it's a small price to pay for the positive outcome.

Another passenger, Tanya Wright, said she fell asleep during the ride but woke up to screaming.

"The next thing I heard was 'she has a knife, she has a knife," said Wright, who was heading to Oakland. "The baby reached out to me and I held her the entire time."

According to the sheriff the bus driver initially refrained from letting Madrigal on the bus. After spending several minutes with her he let her board.

The mother is out of surgery and expected to survive, the suspect is as well. There will be a guard in her hospital room as her self-inflicted wounds are so severe they cannot transport her.
Report a correction or typo
Related topics:
oaklandsanta cruzfresnocrimeherobusgreyhoundgood samaritanstabbinginvestigation
Copyright © 2021 KFSN-TV. All Rights Reserved.
RELATED
Mom, 3-year-old daughter attacked on bus bound for Oakland
HERO 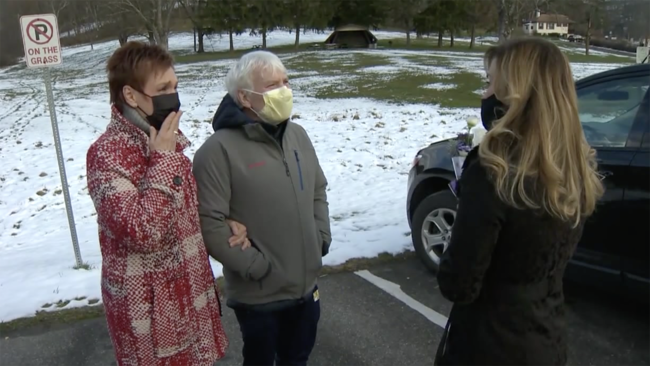