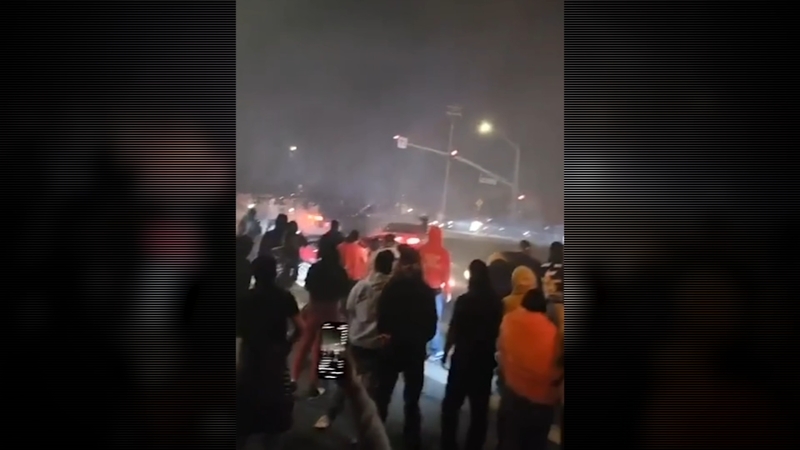 One person was killed, two others injured, and a neighborhood now demanding that their city step up.

Cell phone video obtained by ABC7 News shows a sideshow in Fremont early Saturday morning. One of at least three massive sideshows that took place this past weekend in the Bay Area.

This sideshow happened Friday night in Fremont, California at Alvarado & Falcon. When PD showed up drivers cruised on sidewalks and through grassy areas to get away. No word yet if any arrests were made or if any cars were towed. @abc7newsbayarea pic.twitter.com/rB479LvyB6

"It was loud, it was nerve-wracking," says Kenny McCardie. McCardie lives near this intersection in Fremont. Like so many other neighbors, he's upset about what's happening.

"It's dangerous, it's young kids and they don't seem to be, there doesn't seem to be any concern for safety there at all," said another resident in that Fremont neighborhood.

"I even seen someone with a baby in their arms," said one woman.

"The culture is very rich in the Bay Area but to tear up property? To waken neighbors? To scare children and people who are elderly? That's not the culture of the Bay Area at all," said JeAnna McCardie of Fremont.

As busy as that Fremont scene looked, the sideshow that happened near the area at 42nd and I-880 off of the interstate in Oakland has had an even bigger impact. Police say a man found with massive trauma and a gunshot wound after the sideshow died at the hospital. Two others were injured by gunfire but their injuries are non-life threatening.

Shots were also fired at a sideshow in Santa Rosa Saturday night going into Sunday.

Witnesses in Fremont say fireworks were going sideways, cars were seen riding on sidewalks, on the grass, and anything to get away as sirens went off.

"What I do know is that I'm tired of them tearing up my neighborhood! I'm a woman of color so are you trying to tell me that our city and our police department don't care about us? They don't care about what's happening in our city? I don't understand that. If it were happening in other places I bet you help would be on the way," says JeAnna McCardie.

"I'm from the Bay Area, born and raised, love the Bay! Love the car scene! Like I said, I'm a classic car guy myself but there's a time and place for everything," said Kenny McCardie.