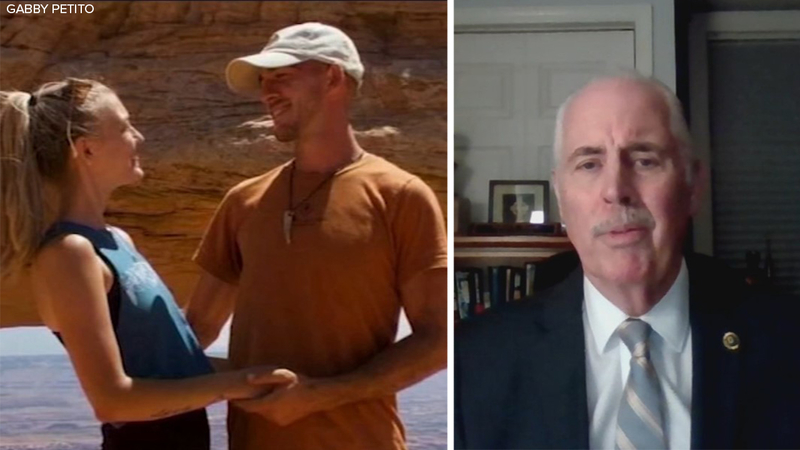 NORTH PORT, Florida -- A former police chief is weighing in on the Gabby Petito case, calling the events leading up to the discovery of human remains in a Florida reserve Wednesday, along with items belonging to Brian Laundrie, "quite strange."

Former NYPD Chief of Detectives Robert Boyce joined WABC-TV to discuss his observations after the FBI unraveled new details in the case, including the discovery of remains and a backpack and notebook belonging to Laundrie.

Among his questions is just how Brian Laundrie's parents fit into his disappearance and what exactly they know.

How Gabby Petito died is revealed as the manhunt for Brian Laundrie goes on. Watch an Eyewitness News update.

"There are just too many strange turns that Chris and Roberta Laundrie haven't been involved in it to not believe that something is amiss here," Boyce said.

Laundrie's parents, Chris and Roberta Laundrie, took part in the search Wednesday with the FBI and police from North Port, Florida, more than a month after Laundrie was reported missing after heading to the vast Carlton Reserve park.

The family's attorney Steven Bertolino, released a statement on Wednesday saying, "Chris and Roberta Laundrie went to the Myakkahatchee Creek Environmental Park this morning to search for Brian. The FBI and NPPD were informed last night of Brian's parents' intentions and they met Chris and Roberta there this morning. After a brief search off a trail that Brian frequented some articles belonging to Brian were found. As of now law enforcement is conducting a more thorough investigation of that area."

In an exclusive interview, Laundrie family attorney Steven Bertolino says the family is "grieving" after possible remains were found at a Florida preserve Wednesday.

"The day the park reopens, they go into this specific area ... they go to this exact spot and they find the backpack and they identify the backpack from what I understand and the notebook in this particular area, so it's quite strange," Boyce said.

He says a lot of things don't add up.

"So, they go to this one location, this remote location where it's a path where people go by ... and they're being told by the FBI agent that all of a sudden we found something, we found the remains ... so there's a lot of things here that don't add up to coincidence, so you wonder how they got there and what they knew all along," Boyce said.

There is speculation as to how Laundrie's parents knew exactly where to go, and Boyce said his gut tells him they got a tip from somebody.

"But for them to go to that exact location, it's very, very strange, in that big park ... did they know more, were they holding back? That will be determined in the next couple days I think."

FBI officials say crews will be onsite for several days.

There is no information yet on whether those remains are in fact Laundrie's.

ABC News uses social media, police reports and public records to piece together some of the events that led up to Gabby Petito disappearance.