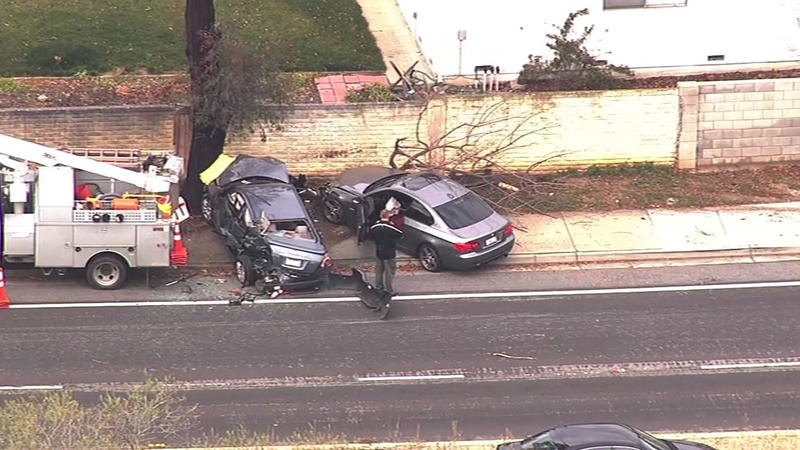 SAN JOSE, Calif. (KGO) -- Two men are under arrest for a horrific crash that left a pedestrian dead.

San Jose police say the two men were racing each other down Yerba Buena Road, a stretch known for speeding. The two cars hit a guardrail and one of the cars crashed into a woman out for a run.

Relatives have identified the victim as Kiran Pabla.

Police said 19-year old Gabriel Becerra was driving a silver Nissan, and 24-year old Manuel Maldonado-Avalos was in a silver BMW, when they lost control of their cars Monday just after noon.

Gloria Perez heard the whole thing from her house.

"I heard cars coming down the street, kind of at a rapid pace and I heard a crash and then I heard a louder crash," she said.

Both cars ended up just past Edenwood Drive, the same spot where Pabla was either walking or running. She was pinned against a tree and died at the scene.

Elisa Barragan has lived along Yerba Buena Road for 16 years.

She and others in the neighborhood say they've pleaded with the city to do something about the speeding that occurs regularly on the street.

"Everyone can put their heads together and put lights, put stop signs, bumps, put radar whatever," Barragan said.

It's gotten so bad that Jennifer Adams stopped walking and driving on Yerba Buena Road about a year ago.

"It's been a while," she said. "If I'm going to the store, even down here right on the corner, I will actually go around the long way to avoid it."

Neighbors now hope this crash will serve as a wake-up call.