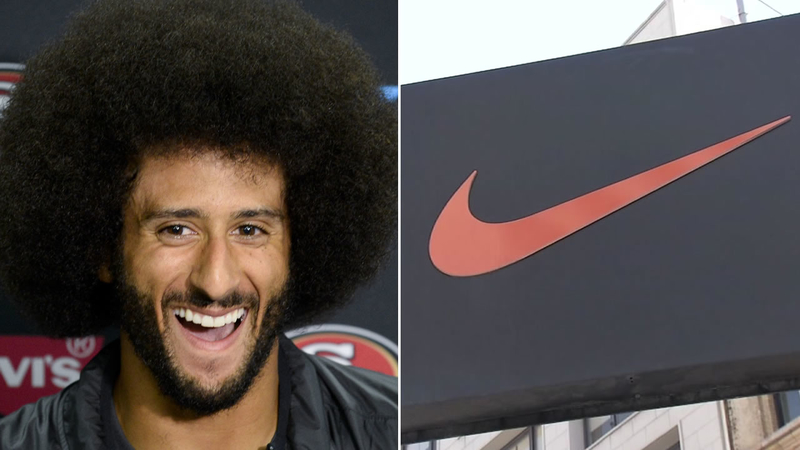 Nike stock fell 3 percent, clearly an indication investors doesn't like the endorsement deal. However, the real test will be with consumers and whether they support or reject Kaepernick's continuing social protest.

Marketing experts believe Nike is opening itself to positive reaction from some, but an economic backlash from opponents.

"Many of those people may refuse to buy Nike or even boycott the brand, and that's not really what you normally want when you're choosing a brand endorser," said Prof. Howard Combs, Ph.D., who teaches marketing at the Lucas Graduate School of Business at San Jose State.

He points out that Nike last month was hit by a gender discrimination lawsuit by past and present women employees. To make amends, the athletic wear giant could have chosen a better celebrity endorser.

"They could have done it possibly by picking a very good female celebrity product spokesperson, and that might have really helped them quite a bit. I'm not sure what the upside is of picking Colin Kaepernick," said Prof. Combs.

Just as athletes know the expression "no pain, no gain," Nike could be taking a calculated risk.

"Sometimes taking risks can pay off," said Prof. Combs. "Nike took a big risk with Michael Jordan. They signed a long, multi-year contract before he was a star, and he became a super star."

In the past, President Trump tweeted he's against players protesting during the National Anthem. He has yet to react to Nike's deal with Kaepernick.

"When we see that tweet, that may drive more people toward Nike. More people who are unhappy with that tweet may go out temporarily and buy Nikes just in spite," said Combs.

The NFL on Tuesday commented about Kaepernick's selection to represent the 30th year of Nike's "Just Do It" campaign.

"The National Football League believes in dialogue, understanding and unity. We embrace the role and responsibility of everyone involved with this game to promote meaningful, positive change in our communities," wrote Jocelyn Moore, the NFL's executive vice president of communications and public affairs, in a statement. "The social justice issues that Colin and other professional athletes have raised deserve our attention and action."