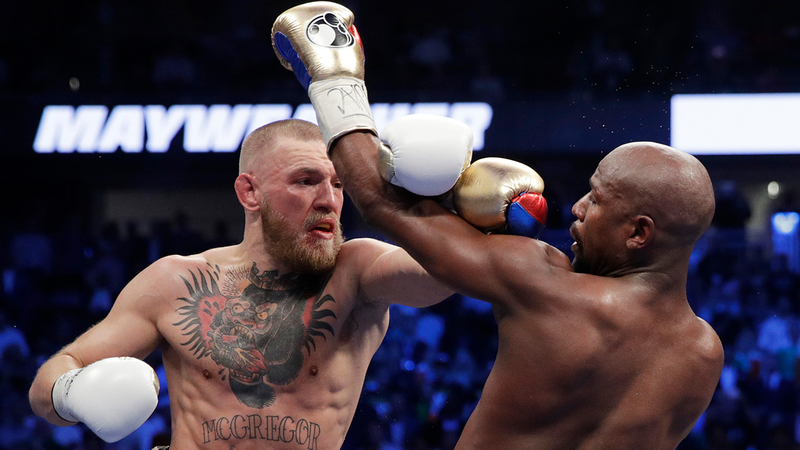 NEW YORK NEW YORK -- Sources tell WABC that Conor McGregor turned himself in to police Thursday night after a backstage melee in Brooklyn. Video footage appears to show the UFC star throwing a guard rail at a bus full of fighters on Saturday's card.

McGregor has been charged with assault and will be arraigned Friday.

By the time he left, there were damaged vehicles. pic.twitter.com/WkTKBnV46I

McGregor crashed a press conference earlier Thursday at Barclays Center. Video showed him with a group of people causing chaos as they took an elevator to the loading dock at the arena. He can be seen tossing trash cans and being prevented from throwing a barricade at a bus during his unannounced appearance in New York.

McGregor hasn't fought for UFC since November 2016 and was stripped this week by UFC President Dana White of the 155-pound championship he had never defended. White also said this week he did not expect McGregor to attend Saturday's UFC 223 card.

UFC fighter Conor McGregor is escorted out of the police precinct following his arrest.

McGregor profanely responded on Twitter and wrote, "You'll strip me of nothing."

After the scuffle, White said that a warrant was issued for McGregor's arrest and that his plane would not be allowed to take off. He described the incident as "a real bad career move" and speculated that McGregor would be facing a lawsuit.

McGregor is tight with UFC 223 fighter Artem Lobov, who was involved this week in a scuffle in a hotel with Khabib Nurmagomedov. Nurmagomedov fights Max Holloway for the lightweight championship left vacant by McGregor.

Lobov was yanked from the card and the fight status of Michael Chiesa was unclear after he was sent to the hospital with injuries sustained in the attack.

"UFC is working very closely with the New York Athletic Commission, Barclays Center security and law enforcement authorities. All parties are working together to ensure the highest standard of proper safety precautions are implemented to protect the fans and athletes.

The organization deems today's disruption completely unacceptable and is currently working on the consequences that will follow. Immediately, Lobov has been removed from this weekend's card and individuals involved in the incident are not welcome at tomorrow's ceremonial weigh-in or Saturday's event at Barclays Center."