Coronavirus: CA man falls ill while returning to US with wife after being quarantined on cruise ship in Japan 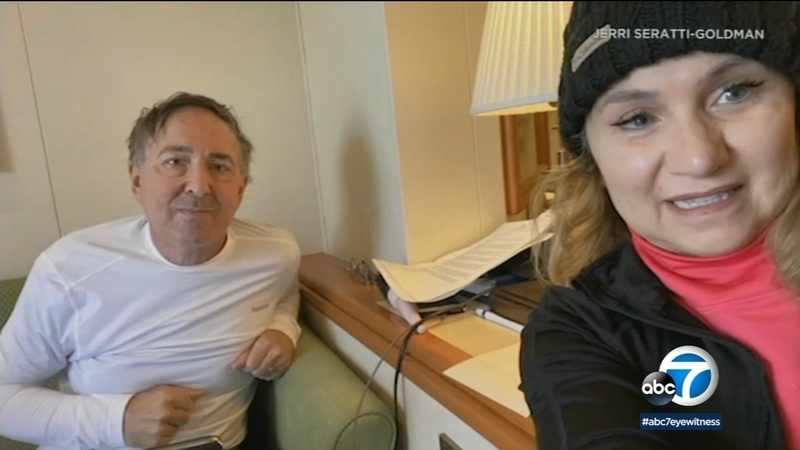 OMAHA, Neb. -- A couple from Santa Clarita who was on a coronavirus-stricken cruise ship in Japan were diverted from California to Nebraska after the husband became ill, officials say.

Jeri Seratt-Goldman says her husband, Carl Goldman, came down with a fever two hours into the flight to Travis Air Force Base and was placed into the isolated section of the plane. The couple was among some 380 Americans who boarded a flight Sunday from Tokyo, where the passengers were quarantined on the Diamond Princess for nearly two weeks.

Among the passengers, 14 tested positive for coronavirus but were allowed to board the flight because they had no symptoms. They were being kept isolated from other passengers on the flight, the U.S. State and Health and Human Services said in a joint statement.

Another flight with American evacuees flew to Lackland Air Force Base in Texas. It's unclear which base the 14 who tested positive for the virus went to.

All of the passengers will undergo another 14 days of quarantine - meaning they will have been under quarantine for a total of nearly four weeks.

The Goldmans were taken to Nebraska and housed at an Omaha medical center, although Carl was taken to a hospital.

Jeri, who spoke to Eyewitness News via FaceTime, said the transition has proved difficult.

"I think I'm just a little out of sorts being away from my husband, and then also not having any belongings," Jeri said. "I'd love to just take a shower, it's been two days, or just wash my hair but I don't have any basic necessities to do that."

Jeri said all of her belongings are back at Travis Air Force Base. She has a few items in the room but no change of clothes and has to put a face mask on when answering the door.

Jeri will be in the dorm-sized room for about two more weeks. She is still waiting to be cleared herself of any coronavirus possibility.

The Goldmans, owners of KHTS Radio, were documenting their experiences on Facebook Live before returning to the U.S.

"None of this is in our control so there's really nothing we can do about it other than making the best of it and having fun," said Seratt-Goldman during the broadcast, adding that they had been passing the time by playing games and watching movies.

Officials said the evacuees who arrived at Travis Air Force Base will be housed at a different location from the more than 200 other Americans who were already being quarantined on the base, in a hotel. Those people have been at the base since early February, when they arrived on flights from China.

No Travis airmen will have contact with the passengers, officials said.

Australia, Canada, Hong Kong and Italy were planning similar flights of passengers. Other governments, including Canada and Hong Kong, also will require the passengers to undergo a second 14-day quarantine.

Japan on Monday announced another 99 infections on the Diamond Princess, raising the ship's total number of cases to 454. Overall, Japan has 419 confirmed cases of the virus, including one death. The United States has confirmed 15 cases within the country. Separately, one U.S. citizen died in China.