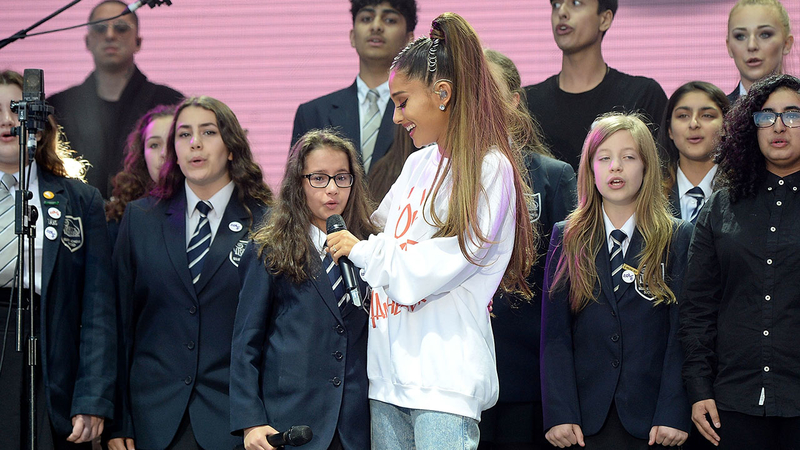 MANCHESTER -- Ariana Grande was joined onstage by Miley Cyrus, the Black Eyed Peas and more during an emotional tribute to and fundraiser for the victims of last month's terror attacks.

The concert was filled with powerful moments.

Before the concert, Grande was sure to create a special section at the front of the stage for those who attended the first concert and met with victims and their families before the concert. One family in particular, that of 15-year-old Olivia Campbell, one of the 22 who tied in the attack, inspired her when planning the concert.

"Olivia would've wanted to hear the hits [today,]" Grande told the crowd. "We had a totally different show planed. We changed everything."

She also said Olivia's mom told her that Olivia wouldn't want her to cry.

Grande held hands with and hugged a young choir member while they joined her in singing "You Are My Everything."

.@ArianaGrande singing "My Everything" with a children's choir at #OneLoveManchester was a highlight of the show! (Video credit: BBC) pic.twitter.com/bwTctmILc8

While Grande performed many of her own hits, one of her most emotional performances was a cover. She sang a duet of "Don't Dream It's Over" with her good friend Miley Cyrus, who put her arm around Grande and then led her downstage to dance.


Everyone joined Grande for "One Last Time"
All of the artists who joined in the concert came back out for one of her most well-known songs, "One Last Time." The song was just rereleased in support of the victims.

Grande finished with "Somewhere Over the Rainbow"

There was hardly a dry eye when Grande closed the show with the classic song "Somewhere Over the Rainbow." Near the end of the show, the singer paused to collect herself, causing the crowd to burst into supportive applause.

For information on donating, visit onelovemanchester.com or donate on Facebook.

If you make donations, please note that donations go to the UK Red Cross and may not be tax deductible. Additional fees may also apply.