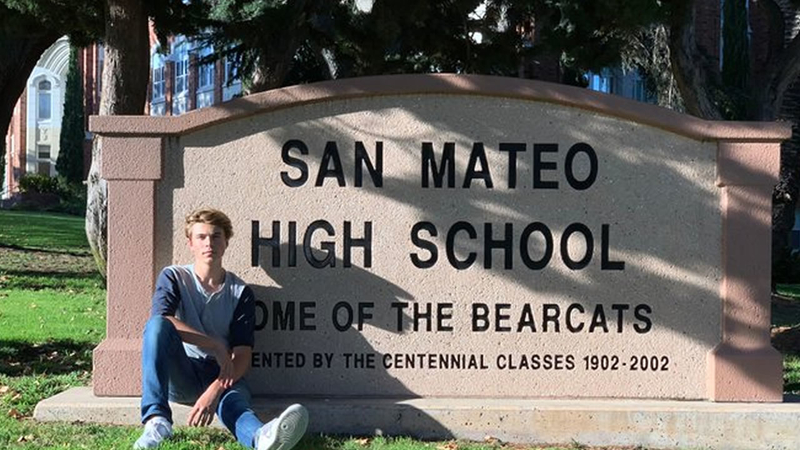 SAN MATEO, Calif. (KGO) -- The Daytime Emmy Awards are on Sunday, May 5. Students at a Bay Area high school will be rooting for one particular nominee.

William Lipton is nominated for Outstanding Younger Actor in a Drama Series. ABC7 News Anchor Kristen Sze recently met up with him at San Mateo High School to see how he juggles academics with his acting career.

If William Lipton seems like a typical high school sophomore to you, that's because he is -- in many ways. He takes a full course load at San Mateo High School. He enjoys hanging out and chatting with friends. But Lipton's life has an extra-ordinary side.

In addition to the regular stuff, he is a budding soap star. Since last fall, he's been playing the role of Cameron Webber on "General Hospital." We interviewed Lipton ABC-7 News when he first landed the gig.

Big congrats to all Emmy nominees! I made the list😄 A very sincere thank you to @valentinifrank and team for giving me the opportunity to portray Cameron Webber. It is such an honor and privilege to work on #GH with all the fabulous and talented actors, actresses and crew 💙 https://t.co/LLUAlQIVPv

Now, the 16-year old newcomer has been nominated for a Daytime Emmy in the category of Outstanding Younger Actor in a Drama Series. No small accomplishment, but a giant surprise when his dad told him the news. "And I'm like, what? It's just a wave full of amazing feelings," says Lipton.

Before this big break, Lipton mainly acted on stage, appearing in Bay Area productions, such as A.C.T's "A Christmas Carol." But his first love was singing.

Since kindergarten, he's been making music as a soloist and as part of the band, WJM. His talent was noticed by "General Hospital." And the rest is history.

Now, Lipton's crazy busy life consists of weekly, sometimes twice-a-week drives down to L.A. "Typical week is there is no typical week. No rules, no patterns. I could go to school on Monday, or I could be in LA."

Huge congrats to #sanmateo teen ⁦@LiptonWilliam⁩ on his #DaytimeEmmys nomination in his first season on ⁦@GeneralHospital⁩! See how normal his life is in our story on ⁦@abc7newsbayarea⁩ Thurs 11:30am! pic.twitter.com/k53bqSmYdn

His mom, Johanna, is the chauffeur-in-chief, often driving overnight as Lipton sleeps. He's in the studio by 6:45 a.m.

Lipton does find time to have fun with castmates, though his day is filled with memorizing lines, rehearsing or studying.

"The majority of the time, when I'm not on the set, I'm in the school room, doing as much homework as I can." That dedication is how the sophomore is able to maintain straight A's at San Mateo High, including in Maria Biaggi's Spanish class. She says, "He's an excellent student and he's a lot of fun in class. And I love the attitude in class, how friendly he is with everyone."

Lipton says his family is not considering moving to LA any time soon -- they're deeply-rooted in the Bay Area. He plans to keep logging the miles, singing and acting, on stage and on screen.

It's hectic, but Lipton says he loves it, and he has his parents to thank. "Love both of them so much. My dad holding down the home front and my mom driving me back and forth. I have so much to thank them for. And getting this nomination has been a thing like, this has been worth it."